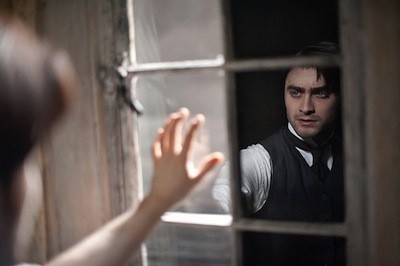 The Woman in Black is going to get a lot of attention for two things. (1) It is the first post-Harry Potter role for Daniel Radcliffe, and (2) it resurrects the long dormant, legendary British horror studio Hammer. These are both important facts and well worth noting, but let's not forget at the same time that The Woman in Black is also a damn fine movie. In fact, its quality means good news for anyone concerned about either of those factors. It means we can hopefully expect more from Radcliffe and Hammer, either together or apart.

The young actor stars as Arthur Kipps, a widower and father of one. Arthur is also a struggling lawyer, and as a last ditch effort to keep his job, he is sent to a remote English village to settle the will of a woman who passed and left her estate in shambles. When he gets to his destination, he finds the town none too friendly. Children peer at him from windows, seemingly locked inside their homes. The adults encourage Arthur to leave. To complete his assignment, he is supposed to go to Eel Marsh House, an abandoned mansion that is inaccessible for a good portion of each day. The tide rolls in and cuts it off from the rest of the town completely inaccessible. There's no way around it, though, the dead woman's papers are still there.

The only sympathetic ear in the whole village is a well-to-do businessman by the name of Daily (Ciaran Hinds). He and his wife (Janet McTeer) invite Arthur into their home. They, too, have suffered a loss, their son died when he was very young. He'd be Arthur's age if he were still alive. The whole village has had its fair share of tragedies and lost youngsters. As Arthur will find out, a young boy drowned in the marsh by Eel House. His mother is believed to be the mysterious Woman in Black who appears before each death and who, if superstition is to be trusted, compels the children to rush to their untimely ends.

The Woman in Black is adapted from a novel by Susan Hill. The screenplay is by Jane Goldman (Kick-Ass, X-Men: First Class) and it's directed by James Watkins (Eden Lake). The story is set in the early 20th century, and both writer and director make great use of the period to concoct an old-fashioned ghost story that is heavy on spooky atmosphere and not without its fair share of chills and thrills. Things go bump in the night over at Eel House, and Arthur is privy to all kinds of scary sights. As each fright makes him jump, so likely will you, too. I know I did.

Radcliffe is more than able as the curious solicitor locked in a mystery he doesn't understand. Half of the role requires him to search through dark corridors, the other half requires him to react to what he finds there. This last part is key, because much of what Watkins has put together is more suggestive than overt. The viewer has to stay alert to background details, to subtle movements in the shadows, and how serious Arthur takes it is paramount to how serious we will take it, as well. The sets are decorated in all sorts of lovely details: kitschy paintings on the wall, dead-eyed dolls and wind-up toys, papers in disarray, and photographs covered in cobwebs and dust. The scenes are often lit only by flickering candlelight, and cinematographer Tim Maurice-Jones (Snatch) knows when to let the shot go long so we can see the specter in the back corner or tighten things up to create a sense of claustrophobic dread.

All in all, The Woman in Black is a highly successful supernatural thriller that does everything it sets out to do. It's solid storytelling that plays on the imagination and draws the viewer into the experience. It avoids gore, and there are no last minute twists to wring cheap screams out of the audience. Rather, we are treated to the kind of frightful tale that previously would have been whispered around a campfire. Now, instead, we huddle in a movie theater and get scared as a group. The Woman in Black is not a great film, but it delivers plenty of shivers, and so definitely worth joining around its glimmering flames. 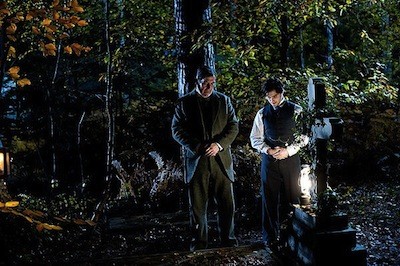