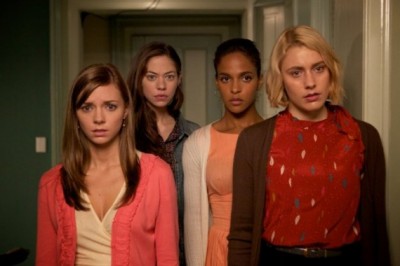 It's been a good long while since writer/director Whit Stilman brought his distinctive style of preppy angst to cinemas--nearly a decade and a half, in fact, since The Last Days of Disco ended his trilogy of '90s comedy/dramas. His style hasn't changed that much in the intervening years; his characters are self-centered, but likably so, erudite and intelligent, and he's not terribly concerned with the world that exists outside of their little cocoon. In the case of his long-awaited Damsels in Distress, that cocoon is the campus of Seven Oaks University, one of the last colleges to go co-ed, where "an atmosphere of male barbarism dominates," according to Violet (Greta Gerwig). Violet and her two friends, Rose (Megalyn Echikunwoke) and Heather (Carrie MacLemore), are attempting to fix that. They run the suicide prevention center (their anti-depression therapy: tap dancing), they humor the less-intelligent male students, they distribute soap to the smellier dorms. And at new student orientation, they find a new friend.

What results is something of a highbrow Mean Girls, in which the introduction of a fourth wheel shakes up the group dynamic, and the new girl finds her own identity outside of it. But the movie isn't really about Lily, who is rather a bland character (through no fault of Tipton, familiar as the willowy babysitter in Crazy Stupid Love). Damsels is primarily interested in Violet, and Stillman has given the incomparable Gerwig one of her most compelling characters to date. Violet is full of contradictions: she's vapid but insightful, self-centered but charitable, nosy but concerned, naïve but wise. She's also just a little bit crazy. It's a pip of a role, and Gerwig blasts off with it; there's a wonderful practicality to her explanation of why she chooses to only date "sad sacks," and the matter-of-fact way that she insists she's not depressed, but merely "in a tailspin," is priceless.

Hers isn't the only pleasurable performance; Echikunwoke gets a good running bit out of the way she wraps her melodic English accent around the phrase "playboy operator" ("moron jamboree" is only used once, but it's a joy to hear), MacLemore squeezes the full juice out of Heather's daffiness, and an actor named Billy Magnussen gives one of the great dumb-guy performances of recent memory ("You're in college and you don't know the colors?" "I don't know about you, but I don't think people should be embarrassed about not knowing stuff"). Aubrey Plaza's participation, however, is entirely too brief, and while Adam Brody is always welcome, he doesn't get much to do (same goes for Jermaine Crawford, who has grown up quite a bit since playing Duquan on The Wire). A few of the other actors (chiefly Hugo Becker, as Lily's would-be beau Xavier) come off stiffly, as if they haven't figured out how to make Stillman's stylized dialogue conversational.

Perhaps due to his prolonged absence, Stillman's directorial instincts are sometimes off; a scene here or there doesn't go much of anywhere, and others just drift off-screen when they've run out of gas. He sometimes has trouble moving the narrative forward, tending to rely too heavily on music cues to get from scene to scene, and the romantic entanglements of the second half are pretty easy to predict. By then, Stillman is spinning his wheels a bit--running jokes are revisited too often, and the filmmaker doesn't seem entirely sure of where he wants to end up, letting the picture fizzle out at its conclusion (even if the little dance numbers are cute). Still, there's a lot to like here, and it's good to have Stillman back. His return is not earth-shattering, sure. But if Damsels in Distress is a piffle, it is at least a charming one.