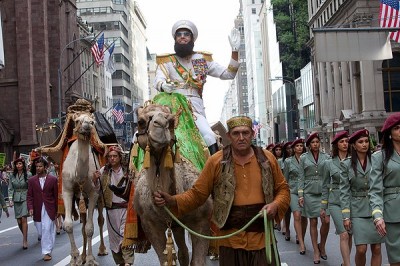 Inveterate prankster Sacha Baron Cohen attempts to meld Peter Sellers and Charlie Chaplin in his latest, The Dictator, his first self-penned foray into mainstream story-driven comedy. The results are mixed. The Dictator is funny, but slim. While it has the good graces to not stick around too long (running time is 80 minutes) and leave us mostly laughing, it fails to be a great comedy because it wastes its performers gifts on hackneyed clichés. The three writers Baron Cohen brought on board to collaborate with him on the script must have been there to pitch jokes, because nobody put any effort into the story.

The man once known as Borat stars in The Dictator as Admiral General Aladeen, the supreme leader of fictional North African nation Wadiya. Aladeen is fretting over being the last despot on the world stage to have nuclear weapons, and though his latest grand efforts have yielded the tiniest of results, the Admiral General is called to New York to convince the UN he means them no harm. Once they reach America, Aladeen's scheming right-hand-man (Sir Ben Kingsley) tries to assassinate his boss. Instead, he strands the warlord in the Big Apple. On the streets of New York, Aladeen will learn life lessons while he bides his time and plans to take his country back.

The Dictator is at its best when Sacha Baron Cohen does what he does best. There are many great gags in The Dictator that challenge good taste and political correctness. When the jokes land, Baron Cohen proves he still has the ability to shock and provoke the way he did in his better efforts (Da Ali G Show, Borat). The more brutal humor, including the jibes he throws at his eventual love interest (Anna Faris), will cause you to howl for all the wrong reasons--but in the right way. His offensiveness is intentionally subversive. Faris' co-op grocery store for political refugees provides plenty of fodder for Cohen to satirize current American counterculture. This is perfectly juxtaposed with his later indictment of our common greed and political apathy. Amidst all the dick jokes and racist barbs, Cohen and crew do have a point to make. Aladeen has a climactic speech that could have been comparable to Chaplin's closing plea to humanity in the remarkably similar The Great Dictator, but unlike Chaplin, Cohen doesn't have the chutzpah to see it through. The moment's pointedness is derailed to service the rom-com hooey.

I get that Sacha Baron Cohen and director Larry Charles (who has lensed all of Cohen's films, as well as Bill Maher's Religulous) probably felt they had to give Aladeen some kind of redeeming quality. Asking audiences to sit through the exploits of a murdering terrorist is probably almost as challenging as asking them to watch the adventures of a gay German fashionista (a.k.a. Bruno). I just don't see why they had to choose such a thin and overdone plot as this one. The Dictator is essentially The Prince and the Pauper crossed with Coming to America. Aladeen is ousted by a double, and proceeds to find love and American values rubbing elbows with real New Yorkers. The execution is half-hearted at best. Anna Faris is wasted in the girlfriend role, and funny cameos by Fred Armisen, John C. Reilly, and Aasif Mandvi are all too brief. Only former MAD TV cast member Bobby Lee stands out in a supporting role, playing a pervy Chinese ambassador.

What we have, then, is a movie that isn't very good, but that also isn't that bad. I'd say there are enough laughs here to make the bucks you'll spend on the ticket worth it (though maybe hedge your bet and go for a matinee). The Dictator lacks the dangerous high-wire act of Sacha Baron Cohen's other movies, but it still manages to find comedy in the most unlikely of places. You have to admire the dude's commitment to pushing the boundaries, especially now that we see what happens when he tries to have it both ways and play it a little safe.