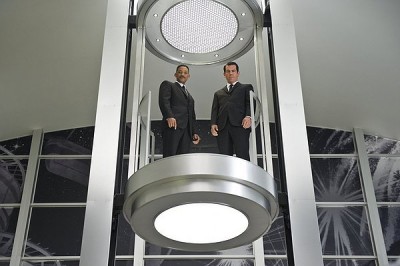 In the same way most of the food in our supermarkets is some kind of processed corn rather than the tasty sustenance it purports to be, Men in Black III is a slickly produced, but ultimately inauthentic packaging of processed entertainment. Corn and all. It's been more than a decade since the last entry in the franchise, and to call this one long in the tooth would be kind. There are none of the original teeth left in its mouth. Those are CGI dentures. With corn stuck in them. It all comes back to corn.

For those who didn't see the trailer, the plot of Men in Black III goes this way: Agent K (played, one would guess, reluctantly by Tommy Lee Jones) once upon a time saved the Earf from a rampaging alien, causing the extinction of that creature's race. Forty years later, Boris the Animal (Flight of the Conchords' Jemaine Clement) has busted out of intergalactic prison and is looking for revenge. To get it, he goes back in time to kill K and keep the way open for his marauding people. K's partner, Agent J (Will Smith), chases Boris back to 1969. There he meets the younger version of his grizzled mentor (now portrayed by Josh Brolin), and the two team up to stop the double dose of Boris before he can undo what K has already done.

There are a few worthwhile elements in Men in Black III. Performance-wise, Josh Brolin transcends the material to give a note-perfect imitation of Tommy Lee Jones. His deadpan delivery and stony face make for a good impression, but the work Brolin does is more than mere mimicry. He truly rolls back the years and figures out how to make this younger K actually seem like an earlier model of the character everyone knows. It's uncanny. 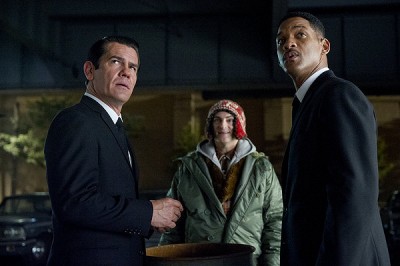 Also better than the role given to him is A Serious Man and Boardwalk Empire star Michael Stuhlbarg as an alien whose ability to see multiple timelines at once makes him useful on J's mission. Stuhlbarg portrays the character as one who has not yet given up on the infinite good, but whose weariness at seeing an equal measure of bad is putting a strain on his sense of wonder. Stuhlbarg is one of those actors who is so different in everything he does, I regularly have to do a double take before I realize it is him.

Most of the special effects are pretty good, though the expensive 3D add-on is barely noticeable (remember: it costs you more to see it this way, so you should expect more). Some of the animated humanoids are a little too fake at times, but there are a few sequences that are impressive for their layered images--particularly the time travel stuff. A couple of scenes in 1969 are full of visual throwbacks to the era's cinematic sci-fi, an all-too-obvious clue of where director Barry Sonnenfeld and the quartet of screenwriters credited with this (alleged) script should have taken their story. Most of the movie, really, could be set in any era; the '60s backdrop is just generic studio decoration. It's hard to accept such a lazy portrayal of the period when we are spoiled with a detailed re-creation of the late 1960s every week on Mad Men.

But that's Men in Black III summed up in one word: "lazy." The filmmakers have a formula, they know what beats worked before, and they keep hitting them. K doesn't talk much, J talks too much, and the aliens are gross and the violence slapsticky. People have paid good money on this drivel twice before. Why try harder? Tommy Lee Jones at least had the good graces to mostly stay out of it. Will Smith is on autopilot through the bulk of the picture. He manages a couple of good one-liners, but you don't get the sense he cares about the movie. Hell, he didn't even do the theme song. Dude's just showing up. 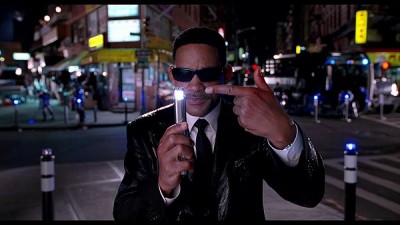 And hey, he's good at what he does. All of these people are. That's what's so depressing about it. The only truly terrible performance here is Jemaine Clement, who mostly belches and Frankenstein-walks his way through the movie. For a character that is supposed to be supremely dangerous, Clement only makes safe choices. One could probably shift blame and say it was a production/directorial decision to go that way. The whole movie is safe. There is no danger anywhere, no real laughs, no sense of risk. It's so bland it's downright cynical. Like high-fructose corn syrup, it's designed to give the product a shelf life. Quality be damned.

Oh, and no talking pugs. My friend who went with me to see it for the talking pug was pretty pissed off about that. They should have been required to put that in the rating. "PG-13 for sci-fi action violence, Nicole Scherzinger's cleavage, and a severe absence of talking pugs."

Don't pay to see this, or it's your fault if they make another one. 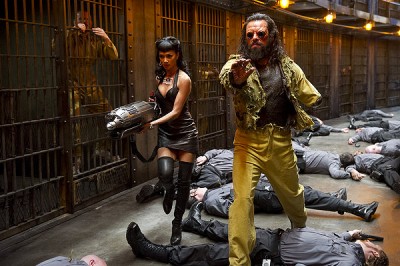