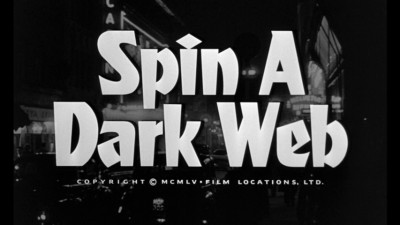 Canadian war vet Jim Bankley (Lee Patterson) is killing time in England as a prizefighter when he finds out that an old pal from the army is in town. Buddy (Robert Arden) used to give Jim work as a heavy on the post-War black market, and now that he's hooked up with Italian mobster Rico Francesi (Martin Benson, Goldfinger), he can get Jim into the local racket. It sounds good, but Jim has a weird moral code. He doesn't mind fixing a dog race or beating up a guy, but he draws the line at killing. He ignores his natural suspicions when the cops come looking around the Francesi office for info on the murder of the brother of his ex-girlfriend (Rona Anderson), and before he knows it, Jim is in over his head--both as an accessory to a killing and as the lover of Rico's sister, Bella (Faith Domergue, Where Danger Lives). By the time Jim figures out to do the right thing, it may be too late.

This is the basic plot of Spin a Dark Web, a dry but mostly satisfying crime picture from 1956. Directed by prolific filmmaker Vernon Sewell (The Blood Beast Terror), from a script by Ian Stewart Black and a novel by Robert Westerby (Dr. Syn, The Scarecrow), Spin a Dark Web lopes along at a leisurely pace, packing the most into its surprisingly short running time. (It's only 76 minutes long, but yet no one seems in much of a hurry.) The main character's bizarre and seemingly arbitrary moral compass makes for an interesting narrative study, while the good girl/femme fatale dynamic between the blonde-haired Anderson and dark-haired Domergue plays to more traditional American noir tropes. Had Sewell injected a little more steam into this love triangle, Spin a Dark Web might have really been a scorcher.

Instead, the drama is bewilderingly tepid, playing a little too nice with its dangerous toys. The B-actors do reliable, yet predictable, work, and the script never delivers any surprises outside of the ethical undercurrents. Spin a Dark Web's saving grace, then, is the impressive cinematography of Basil Emmot. His use of real locations, including the racetracks and kinetic on-the-move shots where he walks with Patterson on real London streets, lends an immediacy to the movie every time the production steps out of doors. Emmot's style recalls similar street-level work by Max Greene on Jules Dassin's Night and the City several years prior and Raoul Coutard on Breathless just a few years down the road. This element very nearly makes Spin a Dark Web a true surprise, but it's not quite enough to push the film over into more memorable territory. 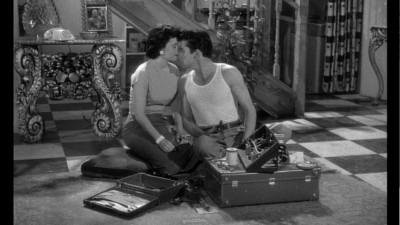 Video:
Spin a Dark Web is part of Sony/Columbia's "Choice Collection" slate of manufacture-on-demand films. The black-and-white picture gets a widescreen release, with a mostly clean image surface, but an underwhelming balance between light and dark--particularly disappointing for a crime film of this nature. The overall look of the transfer is a bit fuzzy, with very little in terms of sharp lines.

Sound:
The basic mono mix is also a bit of a toss-up. The dialogue is clear, but there is a minor hum that runs through most of the picture, lingering just on the edges of the audio frame.

Extras:
As the bare-bones menu loads, you have the option of choosing either the film or its theatrical trailer.

FINAL THOUGHTS:
Rent It. The 1956 British crime vehicle Spin a Dark Web is a solid, albeit predictable crime picture. A mild gambling plot that turns into a post-murder shakedown has little that's unique or surprising, but some excellent location shooting gives the film some striking verité-style sequences that fans of noir might find interesting. 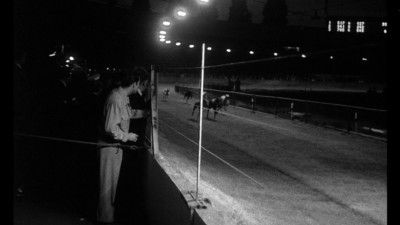