Paramount // Unrated // August 7, 2012
List Price: $36.99 [Buy now and save at Amazon]
Review by Stuart Galbraith IV | posted August 25, 2012 | E-mail the Author
There's still an awfully long way to go, but so far CBS-Paramount seems fairly committed to bringing all 20 seasons of Gunsmoke to DVD. They released the fifth season in October and December of last year, and now comes Gunsmoke - The Sixth Season, Volume 1, another round of extremely good half-hour Western dramas.

As stated in earlier reviews, these taut, half-hour, black and white shows from the late 1950s and early '60s are generally much superior to the one-hour (and later still) full color ones. They offer compact, intriguing little scripts that play like short stories, the acting is usually excellent, and the direction and production values are comparable to movie Westerns of the period. As drama, the best Gunsmokes compare favorably to the best half-hour television dramas running concurrently, in any genre. If you're a fan of, say, the original Twilight Zone, you may be quite surprised by just how good Gunsmoke frequently is.

Never having watched Gunsmoke when it was in its last throes in the late-'60 and '70s, or in reruns, catching it all for the first time on DVD has been a minor revelation. I had no idea that these earlier, black & white, half-hour shows were so good. From the very first season they're way above average and, so far, continue only to improve. The bad news is after all these reviews it's darn near impossible coming up with something new to say.

This latest volume includes the first 19 episodes of the 1960-61 season, when as the number 1 show in the Nielsen Ratings, for the fourth year running, Gunsmoke enjoyed a 37.3 rating, a figure unimaginable today. (For instance, the number 1 [scripted] show last season was NCIS, which had a 19.7 rating.) The 19 episodes are spread over three single-sided, dual-layered DVDs, and as always look great. No extras. 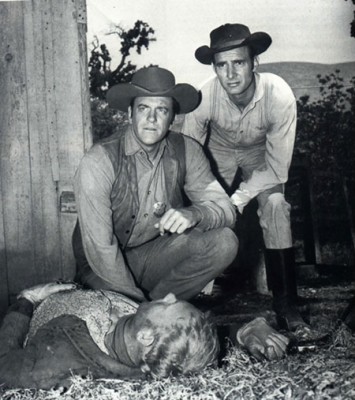 Many sixth season episodes fall into one of these categories. "Say Uncle" is a good example, with young Lee Nagel (Richard Rust) convinced that his disreputable Uncle Hutch (dancer-actor-director Gene Nelson) has murdered Lee's father and plans to marry his unwitting mother. They send Lee back to St. Louis, where en route Lee becomes friendly with George Farr (genre great Roy Barcroft), a gregarious older man. The episode is so subtly written that only near the climax does it dawn on the viewer that Farr has been hired by Hutch to murder Lee before the train gets to St. Louis, in a genuinely gripping sequence.

"Shooting Stopover" is an outstanding, Stagecoach-like episode that has Matt, Chester, a young schoolteacher (Patricia Barry, excellent in an atypical role), a preacher (Paul Guilfoyle), the stage driver (Robert Brubaker), and a two-time murderer Matt and Chester are transporting to Witchita trapped at a waystation. Gunman outside have the party pinned down, unable to access the water pump just a few feet away. It's a tense, exciting story with an admirable amount of characterization crammed into just 25 ½ minutes.

Gunsmoke looks exceptionally good on DVD. Shows are a bit overly grainy (especially during the opening titles, reworked slightly for syndication) but otherwise they're very sharp, very clean. The 19 black-and-white episodes are spread over three discs, with a total running time of about eight hours and 14 minutes. The Dolby Digital mono (English only) is clean and clear, and the shows include optional English SDH subtitles. The packaging allows viewers to read the episode descriptions inside the snap case without having to remove any of the discs.

For those who recognize that the half-hour, black-and-white Gunsmokes are real gems, dramatically taut and movie-like, Gunsmoke - The Sixth Season, Volume 1 is a most welcome release, classic American television that comes Highly Recommended.