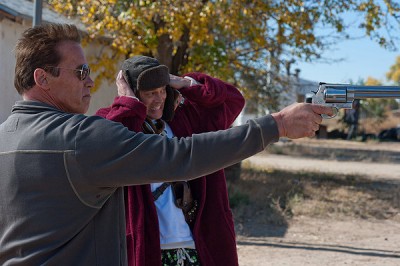 Former big-state governor Arnold Schwarzenegger returns to multiplexes playing small-town sheriff Ray Owens, a Los Angeles transplant who set up shop near the border between Arizona and Mexico, in the old-fashioned action flick The Last Stand. An aging lawman with a taste for the quiet life, Ray is expecting a mellow weekend off the clock, but it's going to turn out to be anything but. Up in Las Vegas, the FBI, led by agent John Bannister (Forest Whitaker), are transporting Mexican drug boss Gabriel Cortez (Eduardo Noriega) to the prison where he will spend the rest of his days when the bad guy's men pull a daring rescue. They take Cortez out of the police van and put him behind the wheel of a high-end Corvette. Rubber hits the road and the cartel man is on his way to his home country, with Ray's town as the last stop between incarceration and freedom.

That is pretty much all you need to know about The Last Stand, a high-octane shoot-'em-up from South Korean filmmaker Jee-woon Kim, the madman behind The Good, the Bad and the Weird and I Saw the Devil. The director pulls back a little here, playing more to Arnold's speed for his English-language debut, but despite some slow patches on the road to the big finish, the final 30 or 40 minutes make it all worth it. 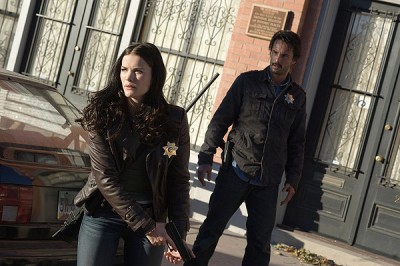 The script by newcomer Andrew Knauer and veteran Jeffrey Nachmanoff (the director of Traitor and a writer on Homeland) is a bit front heavy as the authors take their time putting the pieces into place. In addition to the FBI team, the runner, and Ray, there is also Ray's posse and the henchmen that Cortez has hired to clear the way for his drive. The latter is led by Fargo-bad man Peter Stormare, who plays the role with a bored affectation and an unidentifiable accent. It's a weird but surprisingly good choice. He is menacing because he cares so little while Ray cares so much. On his side, Ray has two main deputies, his old pal Figgy (Luis Guzman) and the eager, young Sarah (Jaimie Alexander, as awesome here as she was playing Sif in Thor). When it comes time for the big standoff, they will also be joined by a down-on-his-luck ex-Marine (Mathew Greer) and a gun nut with a hidden arsenal (Jackass's Johnny Knoxville providing comic relief).

The back half of The Last Stand is Arnold and his crew trying to set up a roadblock after Cortez blows through every FBI barricade. First they will have a street fight with Stormare and his team, and then it's basically Arnold in a one-on-one with Cortez. This is where the movie really gets good, with lots of gunplay, vehicular stunts, and fisticuffs. Schwarzenegger is a little slower than he used to be, but unlike Sylvester Stallone, he doesn't try to pretend otherwise. He has accepted the elder statesman role gracefully, playing Ray as a man who learned hard enough lessons to know when it's time to push past his limits and throw down. The action star has left behind the groan-worthy puns and catchphrases, playing for more low-key laughs. He's still hokey, but it's kind of charming. Jee-woon Kim plays around with a few Western tropes, easing into the small-town Americana, embracing both the genial humor and the basic decency one would expect from a white hat/black hat cowboy picture.

There really isn't much more to The Last Stand than that. The movie is what it is. If you're looking forward to seeing Arnold Schwarzenegger back up on the big screen, and if the trailer made you chuckle even a little, then you know what to expect and that's exactly what you're going to get. It's not the greatest action movie you're going to see this year, not unless it's a pretty bland twelve months for that kind of thing, but it's going to be one of the better times you can have right now. So, what the hell, go ahead and pull the trigger. 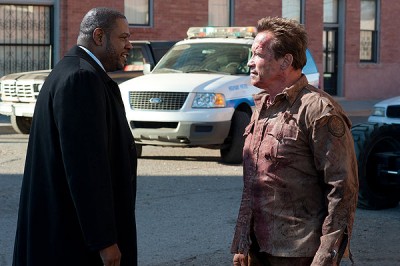