Please Note: The images used here are taken from the standard-definition DVD included with this release, not the Blu-ray edition under review. 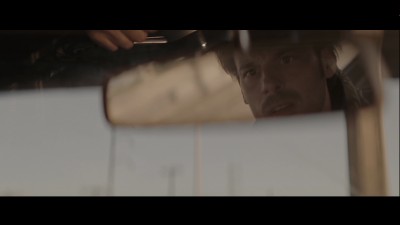 Damn, it's hard to be a gangster. Particularly in this economy. Don't be fooled. When your wallet's empty, the bad guys are feeling the pinch, too.

Or so we come to learn in Killing Them Softly, the latest feature from Andrew Dominik, the long-awaited follow-up to his masterful The Assassination of Jesse James by the Coward Robert Ford. The writer/director is working from a novel by author George V. Higgins here. Higgins also wrote the source material that became the cult 1970s crime film The Friends of Eddie Coyle, a film it'd be a safe bet to say Dominik has seen. His crooks and killers look like throwbacks to that era, as do their cars. Killing Them Softly doesn't go back that far in time, however; Dominik sets the action in 2008, in the weeks leading up to Barack Obama's election. The news is on throughout the movie, and all the underhanded shenanigans on screen are underscored by stump speeches and financial flailing in the real world. As things fall apart in their small 'burg, so too is Wall Street disintegrating.

Brad Pitt leads an ensemble cast as Jackie, a cool-as-ice hitman called in after a couple of low-level robbers knock over a private card game. The gunmen in question are Frankie (Scott McNairy, Argo) and his Australian buddy Russell (Ben Mendelsohn, Animal Kingdom). The two met in jail, and they have been struggling ever since they got out. Russell has a scheme to buy some heroin with money raised selling stolen dogs, but Frankie has a bigger score in mind. The idea to rob the gamblers comes from a two-bit crime boss nicknamed Squirrel (The Sopranos' Vincent Curatola). Though private gambling nights are generally considered off-limits and boosting one would mean certain death for the thieves, Squirrel has found a way to juke the system. A couple of years ago, one of the made men, Markie (Ray Liotta, Goodfellas), had his own card game robbed, rightly guessing that no one would really believe he did it and he'd get away with the loot. Markie's big move is now the stuff of legend, and Squirrel is banking that not only will the other gangsters think Markie was dumb enough to do it a second time, but they won't turn a blind eye at being duped again. 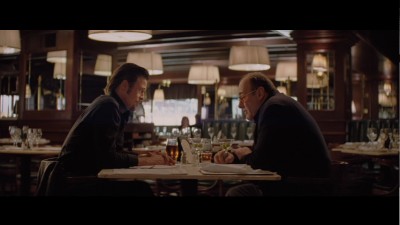 Though the set-up sounds complicated, it really is just the set-up--and just a small sliver of what Killing Them Softly has going on. The fall-out gets even more complicated, as Pitt's Jackie is called in to manage the situation and set things right. It's all about making the gamblers feel safe to play and sending the message that this kind of thing won't be tolerated. Jackie has clandestine meetings with an intermediary (Richard Jenkins, The Cabin in the Woods) who shuttles messages back and forth between the killer and the big bosses. These days, the organization is a long way away from one impulsive hothead being in charge; it's now an indecisive committee. This means wheels grind slow, even as more players get involved and the waters get further and further disturbed.

The parallels between this bunch of crooks and the bunch of crooks in Washington and on Wall Street are pretty obvious, though Dominik is careful not to have anyone point it out. The newsfeed exists as background noise, and excepting one climactic moment where all of this heady material is sent home like a hammer hitting a firing pin, no one ever makes comment on it. They have plenty of other things to comment on, anyway. The best scenes in Killing Them Softly are the long conversations between the various characters. They discuss their crimes and their vice, but they also talk about their dreams and their anxieties. Regardless of their position in the food chain, every outlaw seems to be suffering from the same malaise: this is not the lifestyle they were promised, it's not the vocation they had in mind. No one better exemplifies this than the out-of-town hired gun, New York Mickey, played by Tony Soprano himself, James Gandolfini. Mickey is called in to handle a part of the gig that Jackie would rather not do himself, but he's seen better days. Marital woes, scrapes with the law for minor infractions, too much booze--Mickey is a mess. Gandolfini plays him with false bluster and a sad humor. It's a great part, mostly just a two-scene cameo, but it perfectly illustrates how the myth of gangster life has floundered. 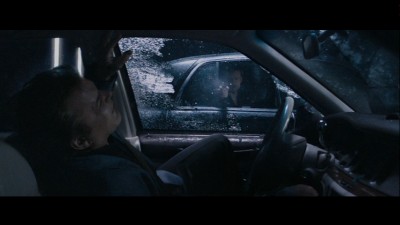 Pitt is an ideal fit for Jackie. The actor is often at his best in roles where he is required to hold back. Jackie is like the last of a dying breed, a professional who takes his job seriously and holds his cards close. His mystery makes him charismatic, even though he's also a little scary. The first time we see him at work, Dominik and director of photography Greig Fraser (Snow White and the Huntsman) shoot the gunplay in slow-motion, turning the murder into an abstract smear of motion and texture. It's both brutal and beautiful, a contradiction Dominik is more than aware of. The violence throughout Killing Them Softly is a mix of visceral ballet work, dark humor, and sickening consequences. We get our thrills and our inappropriate laughs, but we also get shown what we're laughing at, like the guy we're making fun of was standing behind us the whole time and he heard everything we said. The shame of getting caught is linked to the excitement of having done bad.

Killing Them Softly is a skillful balance of pretension and genre, low art made with high craft. Carefully considered dissolves work with an underplayed score (The Grey's Marc Streitenfeld is credited with "piano pieces and musical ambiences"), while pre-existing music cues to rival even Scorsese both enhance and ironically comment on all the wickedness on display. As the story develops, Dominik simultaneously caters to and defies expectation. Some things pay off the way bets in this kind of story should; in other instances, Dominik ditches the favorite and goes for the long shot. It's those decisions that bring the largest returns, making Killing Them Softly one of 2012's bigger surprises, sneaking in just under the wire as one of the best of last year. 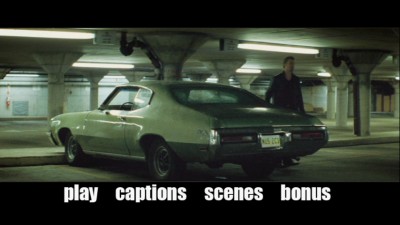 Video:
No hyperbole: this is one of the best Blu-Rays I've seen. Presented here on disc as an MPEG-4 AVC encode with 1080p resolution, Killing Me Softly looks stupendous. The level of detail is deep and rich. Resolution is sharp throughout the frame, with color and texture both looking realistic, artful, and varied. Blacks are solid without any crushing. The image is free of any scratches, glitches, DNR, blocking, or jagged edges. Night and day are expertly contrasted, as are different environments. One scene looks washed out, the next is shiny and neon-lit. Seriously, Killing Me Softly is what HD was invented for. The movie is shown in its original ultra-widescreen 2.40:1 aspect ratio.

Sound:
You're going to notice how good the 5.1 DTS-HD Master Audio track is from the very first scene. Dominik plays with sound a lot in this movie, with industrial noise mixing with news broadcasts and dialogue at regular intervals. The mix here is dynamic and smartly arranged, with a large amount of movement between all the speakers creating a genuine surround sound experience.

English Closed Captioning is available for those who require it, as well as optional Spanish subtitles.

Extras:
The "Making of Killing Them Softly" featurette is fairly inconsequential at barely 5 minutes long. The conversation about the underlying political message of the film is interesting, but it barely gets started.

There are four deleted scenes including more conversation between McNairy and Mendelsohn, two more scenes discussing "The Doctor" (one with Pitt and Jenkins, the other with Pit and McNairy), and a snippet with Pitt and Gandolfini. These total just over 9 minutes, and if you like the film, you'll like them. They don't add anything, but the movie's gift for gab continues to be infectious.

The packaging is a standard Blu-Ray case, and it comes with a bonus DVD, a downloadable iTunes copy (yay!), and a b.s. "Ultraviolet" copy (boo!).

FINAL THOUGHTS:
With 2012 come and gone, the year's second-best film comes to Blu-Ray, and it's even better now that it's had some time to settle than it was on the initial theatrical go-around. Andrew Dominik's stylish crime thriller looks great in high definition. Every interlocking piece of Killing Them Softly's intelligent, talkative narrative fits together with exquisite ease, forming the image of a criminal underworld that is just as abused by the everyday class warfare of American politics as the rest of us. Brad Pitt leads an excellent ensemble to violent, invigorating glory. This is one of those movies that no one saw but that everyone should own. DVD Talk Collector Series. 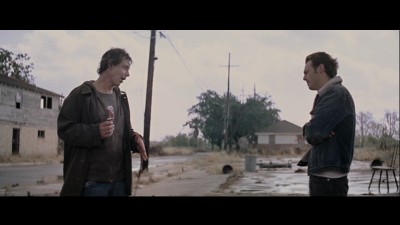