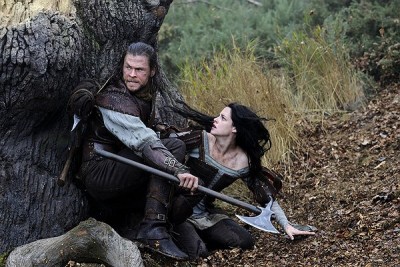 The review I was planning to write amidst the spates of boredom that is Snow White and the Hunstman was originally going to have a much harsher tone than what you're about to witness. That changed when, as we exited the theater, I asked my friend, "So, what do you think?" and was surprised to hear that she kind of loved it. Here I thought the stillness in our adjoining seats was a symptom of mutual ennui, each of us gripping our armrests and gritting our teeth and trying to muscle through to the closing credits. Not so, as it turns out.

As we traded opinions, it turned out that, despite having opposite reactions--her love, my hate--we actually were in total agreement on what we thought of the film. As I detailed my complaints, including the terrible plot and the surprisingly terrible performance from Charlize Theron, my friend didn't disagree with any of the objections. In this case, she just didn't care*. She was too busy digging the art direction. She was admiring all the details in the costumes and the expertly designed weaponry. She was awed by the elaborate sets and the inventive creatures. When faced with it, I had to admit I was, too. In particular, I was enamored of the weird transformations and the filmmakers' take on both the Dark Forest and the land of faerie. I just didn't like those things enough to ever want to sit through Snow White and the Huntsman ever again.

It's probably important to note that my friend is an artist and I am a writer, so Snow White and the Hunstman hit us both where we live. The film is a triumph of art direction over narrative. Despite enduring for more than two centuries (the Brothers Grimm version is apparently dated 1812, so Happy Birthday!), this well-known story has finally foundered under its own vivid imagery. Directed by first-timer Rupert Sanders, with costume designs by regular Tim Burton-collaborator Colleen Atwood and a huge art team lead by Dave Warren (Hugo), Snow White and the Huntsman is a gorgeous feast for the eyes, equal parts Guillermo del Toro and Tarsem. Forget the three writers who labored over this script. This movie is about pretty wind-up dolls. Dress them up, turn the key, and go.

For the story-minded amongst you, Snow White and the Huntsman is full of all the familiar elements, with a big battle scene tacked onto the end. (Presumably, this is required for any film "from the producers of Alice in Wonderland," as the poster declares.) Snow White (Kristen Stewart from the Twilight movies) is the most beautiful girl it the land, and her purity is a threat to the evil Queen Ravenna (Charlize Theron, [everyone knows she's a motherf'n] Monster). Ravenna stays eternally young by suckling on the souls of young girls, and if she can take Snow White's, she wins everything. When the girl escapes, Ravenna sends a melancholy huntsmen (Chris Hemsworth, a.k.a. Thor) to track her. He ends up helping her, and they journey across the treacherous and surreal landscape to find the rebels sympathetic to Snow's cause. 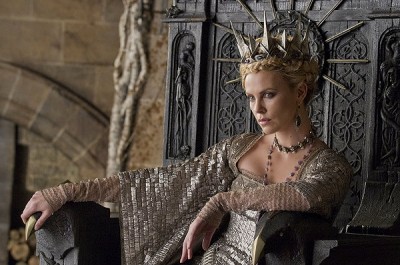 And yes, along the way, they do meet seven dwarves. In this case, the men are gold miners who have fallen on hard times thanks to Ravenna's greed. They also aren't played by real little people, but instead a who's who of British character actors--Ian McShane (Deadwood), Ray Winstone (The Departed), Eddie Marsan (Happy-Go-Lucky), Toby Jones (Infamous), Bob Hoskins (Hook), and Nick Frost (Hot Fuzz), to name a handful of them. The effect that puts these men's faces on far more diminutive bodies than we are used to seeing carrying their visage is both plain weird and weirdly effective. It's disconcerting, but also kind of cool, to see Al Swearengen barely passing Bella Swan's waist.

The plot is essentially standard fantasy structure: walk until you encounter a complication, deal with complication, walk some more, repeat until reaching the goal. Again, many of the sights they see along the way are impressive, but the movie itself is a terrible snooze. The biggest problem is that everyone seems to be taking this nonsense way too seriously. Chris Hemsworth appears restrained by the material, and though there is supposed to be some kind of spark between the huntsman and his charge, there is nary a hint of sex. Even the infamous kiss that the climax of the Snow White fairy tale hinges on is more of a sad farewell than a passionate plea for one last chance at "life itself" (which, according to Bob Hoskins' blind dwarf, is what Snow White embodies). Thor's not even all that impressed when he sees his princess giving a speech ten minutes later. Dude, last time you saw her, you were drunk and she was dead!

More disappointing, however, is Charlize Theron, who somewhere along the way decided that being an evil bitch was a joyless task. Despite the fact that Ravenna is meant to be a seductress, she is never sexy; despite having the kingdom at her fingertips, she never enjoys it. Her determination to not let Snow White break the spell that keeps her young is more like a pouty grudge. She'd rather not let go of the traumatic past that led her to this point. How 21st Century! To make matters worse, Theron speaks every line slowly, as if she is desperately clinging to that scant British accent she's adopted. Some English people speak fast, my dear, just listen to the dwarves.

There are definitely worse things you can do than watch Snow White and the Hunstmen. Like, for instance, watch Men in Black III. That is one thing, actually, my movie friend and I can agree on wholeheartedly. (So, you know, bravo for not being the worst movie of the summer, Snow!) If you're more inclined to like pretty, well-made things, then you may want to heed my buddy's advice and check this one out; if you're a stickler for writing and other such concerns, be prepared to spend a lot of time trying to forgive this attractive stinker for not being very smart. Maybe bring an iPod and listen to some music while you watch. Just imagine Snow White and the Huntsmen is one long high-concept music video. And if you figure out which album it cues up with best--you know, a la Wizard of Oz and Dark Side of the Moon--be sure to let the rest of us know!

* Note: This friend regularly does care about such things as plot and acting, so please don't read any of this as a knock toward her. I quite regularly tell her that she's smarter than me, and sometimes she even graciously pretends not to believe it. 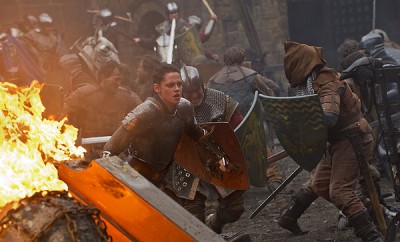