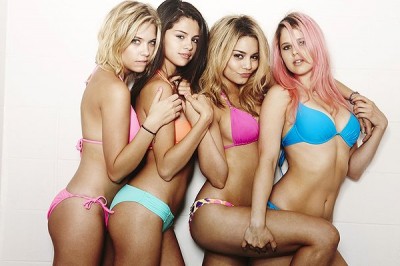 Harmony Korine's arthouse exploitation picture Spring Breakers is as complicated as it is perplexing, inspiring a complex reaction that is a combination of voyeuristic scandal and general queasiness. This chronicle of four girls on a runaway week in Florida has the empty calories of bubblegum, the allure of neon, and the rhythm of trance music. It also has the stale air and suffocation of being trapped in a car on a hot day. Meaning, Spring Breakers is simultaneously as tasty and hypnotic as it is off-putting. One might also describe it as unrelentingly tedious and a bit of a failure. Spring Breakers is a female-led remake of Hype Williams' Belly as directed by Gus Van Sant. Point of order: Williams paid homage to Korine in his film, here is Korine nodding right back.

The Spring Breakers in question have been handpicked from the Disney and Family Channels: Wizards of Waverly Place's Selena Gomez is the innocent one of the group (the brunette, duh) and her best friends are a couple of blonde terror twins, played by High School Musical alum Vanessa Hudgens and Ashley Benson, one of the Pretty Little Liars. Their names are Faith, Candy, and Brit, respectively. Rounding out the group is the pink-haired Cotty, played by the director's wife Rachel Korine, also the star of his film Mister Lonely. The girls don't have enough cash to go to St. Petersburg and so Brit, Candy, and Cotty rob a diner. Problem solved. Once the gals make it to Florida, Spring Breakers is a rush of drugs and booze--at least until the cops bust up the party. The ladies are stranded in jail without a penny or a prayer. This is when the predatory rapper/drug dealer Alien (James Franco in cornrows and metal teeth) swoops in. He fronts the money and then takes the bikini-clad college girls deeper into the gangsta life they've been playing at.

The portion of the film that immediately follows the ladies' incarceration is the most compelling section of Spring Breakers. It's also the part that should make you the most uncomfortable. Korine is boldly deglamorizing the pimps/hoes culture that has taken root in contemporary society, showing how an opportunist like Alien uses false charm and manipulation to make desperate women believe he is offering them something of value. Of the girls, only Faith has the good sense to know what Alien is up to, and watching him try to convince her to stick around is deeply unsettling. It's almost too bad that Korine decided to make Faith the "square" of the group, as it very nearly undermines his intentions. Of course the least corrupt is also the least corruptible. Props to Selena Gomez for managing to keep the emotion of the scene centered on Faith and her fear, and for being able to deflate even James Franco. 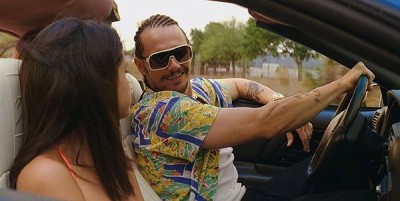 The message of Spring Breakers grows hazy from there. The other girls stick around and become Alien's lovers and his personal hit squad, robbing tourists and locals, as shown in an over-the-top crime spree montage. (Highlight: Korine and Franco get to indulge every boy's "November Rain" daydreams by throwing someone into a wedding cake.) They also get caught up in Alien's rivalry with another local thug (rapper Gucci Mane). The macho posturing between these would-be tough guys goes down in a strip club, and it's a dull and ugly sequence that, like just about every scenario in Spring Breakers, goes on too long. The mundanity, I am sure, is intentional. Korine is contrasting the bright beachwear of spring break partying with the real grime of underworld maneuverings, and by giving them equal weight, showing them as equally unappealing.

Which seems to be the real punchline to the elaborate practical joke that is Spring Breakers. For as much as this movie will be sold as a fun-time party film with pretty barely legals whooping it up with hardly any clothes on, Korine is having the last laugh. The elaborate, ongoing scenes of boys and girls getting drunk on the beach, soundtracked by Cliff Martinez and Skrillex, are about as unsexy as it gets. Korine invites you to leer, and even does so for you, zooming in on breasts and crotches, dehumanizing and objectifying his subjects, and effectively taking away any puerile interest you might have in seeing naked youngsters cavorting in the sand. The writer/director also invites you to laugh at these collegiate dunderheads, just as he also invites you to laugh at Alien. When the would-be Scarface shows off his house and everything in it, Spring Breakers slips into kitschy comedy. This, too, should make you feel uneasy. Franco goes all-in, and for as accurate as his performance may be to the individuals he based the character on, it's also just a step or two away from a minstrel show. The movie is calling out Alien and other white boys like him for how they've appropriated black culture, but it ends up being a fine line. Is what Franco is doing here, with the accent and the fashion and everything, really all that different? 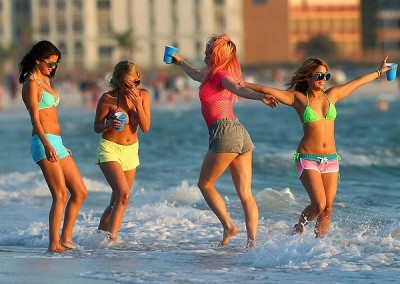 This is the true conundrum of Spring Breakers. It's hard to tell where Harmony Korine's intentions really lie. For all the subversion of popular culture and the critique of how young people are sexualized and criminal behavior glamorized, there is a fetish-like quality to how Korine and cinematographer Benoit Debie (The Runaways) shoot everything. Their obsessive attention to detail carries over into the editing, to the way Korine and Douglas Crise (Babel) cut this thing, layering and repeating images, lingering on the most garish elements. Not just lingering, but doing so well past the point of boredom. As I said earlier, everything about Spring Breakers goes on too long. It's a ninety-minute film that feels like three hours, a party that has gone on way past everyone's bedtime. By the time you emerge from the darkened cinema and into the sunlight, you're going to feel like you've already crashed and are well into the hangover.

Even worse, the ending does nothing to clear up the film's message. In their way, Candy and Brit are now folk heroes, emerging unscathed and unpunished. The ironic voiceover where the girls speak of the mystical experience they've just had, and the echoes of Alien declaring it all to be a dream, only further obfuscates the point of the whole thing. Which is why I ultimately want to declare Spring Breakers to be a failure. While, yes, the ladies, for once, are the victors, their behavior is no more noble than the tropes and the stereotypes they otherwise take a shotgun to. Spring Breakers is too dangerously close to being exactly what it's meant to critique. There's just way too much cake and frosting smeared on the lens, and all I can guess is that Harmony Korine is trying to have it and eat it, too. 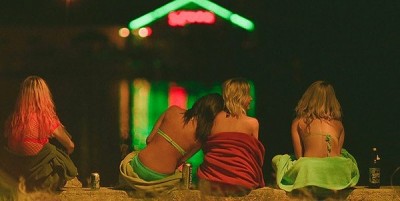