Wake of the Red Witch 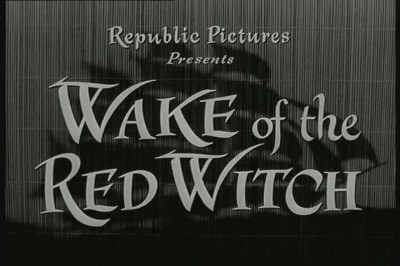 I mean, what more do you need to know before you're sold on Wake of the Red Witch, a 1949 man's adventure that throws the Duke into several scenarios unique to his filmography.

Wayne stars as Captain Ralls, the top man on the Red Witch, a cargo ship for hire. At the start of the picture, the Witch is hauling gold bouillon. The gold's owner, a man named Sidneye (Luther Adler), has reason to suspect Ralls, his longtime rival, is going to double-cross him, so he has sent along a spy to try to commandeer the boat before that can happen. Sidneye, of course, dispatches with the operative, and with the help of his newest crewmember, Sam Rosen (Gig Young), he sinks the boat where only they will know how to find it. Rosen is a man trying to outrun his own wrongdoing, but Ralls rightly senses he's a straight shooter. Though Sidneye is convinced Ralls has pulled a fast one, he bides his time, waiting for the Captain and his remaining cohorts to go after their bounty.

When that doesn't happen fast enough, Sidneye tricks them into coming to his private island, where he traps their fishing boat in his lagoon and tries to lure Rosen to betray his captain and join the other side. Much of Wake of the Red Witch, which was adapted by Harry Brown (El Dorado) and Kenneth Gamet (The Flying Leathernecks) from a popular novel by Garland Roark, is taken over by Sidneye's story within a story, detailing how he met Ralls when the scoundrel was adrift at sea, and how they fought over the same girl, Angelique (Gail Russell), on a remote island where Ralls was worshipped as a god. Trust me, based on the bare plot of this, Wake of the Red Witch is one weird movie. That's on the island where Ralls defeats the big rubber octopus, fulfilling a deal with Sidneye. Unfortunately, things go the wrong way for Ralls and circumstance leads Angelique to marry Sidneye instead, thus setting up the ongoing feud between the captain and his financier.

Wake of the Red Witch was directed by Edward Ludwig, who also directed the Duke in The Fighting Seabees. Ludwig pulls from a lot of sources here. On the one hand, Wake of the Red Witch is a jungle adventure, with visual overtones (and even some thematic threads) reminiscent of Island of Lost Souls and The Most Dangerous Game; on the other hand, it's a gothic romance, with Wayne making for a surprising antihero. He is cocksure and sometimes despicable, but he's also a haunted drunk prone to violent binges. Ludwig frames him in extreme close-up whenever the man goes on a tear, making the Duke's rage the most realistic element in a movie that sometimes suffers for being shot entirely on a Hollywood soundstage. While this could have totally drowned the picture, Wake of the Red Witch actually benefits from its own artificiality. The rear projection and chintzy sets end up amplifying the more lurid aspects of the romantic subplot, embracing the overheated melodrama in a way that allows it to balance with the more brutal aspects of the story. In the opening scene, Ralls is forcing two sailors to fistfight far past what is necessary as an example to his crew of what will happen if anyone else gets into a tussle; later, after Ralls nearly beats a man to death himself, he leaves the scene of the brawl with blood smeared across his knuckles. For a movie as old as Wake of the Red Witch, it pulls no punches (if you'll pardon the expression).

Gail Russell (Angel and the Badman) delivers a breathless performance as the love interest, and Luther Adler (D.O.A.) is appropriately reptilian as the moneyman. Some of the other acting is not nearly as good. Gig Young is starchy throughout, and his love interest, Sidneye's niece (Adele Mara), is perhaps too wide-eyed and innocent, to the point where the "empty vessel" side of her personality seems unintentional. Wayne makes this work, however; in a movie where his character is regularly compelled to go where others don't dare and literally pull the plot forward, it only adds to the performance that he has to carry his supporting players with him when he does it.

Wake of the Red Witch is definitely not one of the Duke's A-pictures, but it's a solid genre diversion for a screen personality best known for horse operas and war movies. Consider it a palette cleanser to transition from the American frontier to the distant battlefields of whatever 20th Century conflict the old patriot ends up carrying the flag into. As a B-actioner, Wake of the Red Witch more than delivers the promised cargo. (If you'll pardon another expression. I had tons more!) 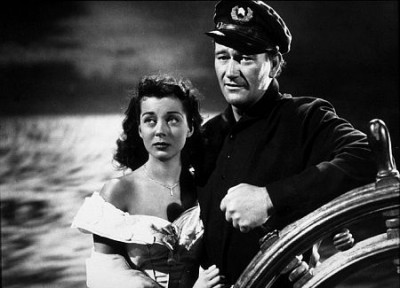 Video:
Wake of the Red Witch is shown in black-and-white at its original 1.37:1 aspect ratio. The print used for this high-definition master was pretty good, with only a small amount of onscreen noise or the occasional scratch. Values between dark and light are nicely contrasted, and I saw no evidence of ghosting, tracers, or pixilation. Olive Films keeps the resolution sharp and also does a nice job of maintaining the film's intended cinematic presence.

Sound:
Olive's mono audio mix for Wake of the Red Witch is equally as solid, with strong tones and no distortion. Music sounds good when played loud, and the dialogue is never overshadowed.

FINAL THOUGHTS:
Recommended. Wake of the Red Witch is a surprising departure for John Wayne. The 1949 adventure film showcases the Duke as a conflicted sea captain caught between love and money, and sometimes pouring booze over both of them. With a jungle expedition at its center, and at times dressing in the clothes of a gothic love story, Wake of the Red Witch is a hard movie to pin down--but that's okay. Just go with the flow and you're in for some quality popcorn entertainment. 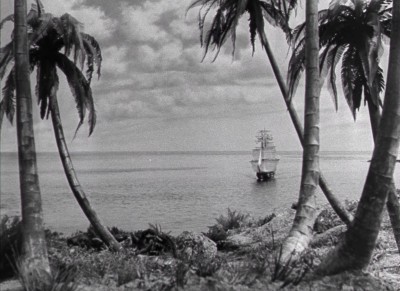