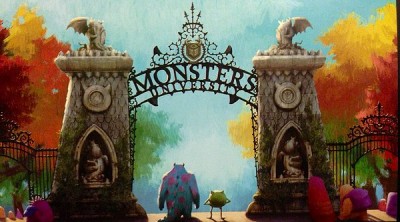 The Pixar machine continues to grind into previously avoided territory with its first ever prequel. Monsters University is the retrograde follow-up to 2001's highly successful and inventive Monsters Inc.. While the original animated feature focused on adult beasties working as "scarers," sneaking into the bedrooms of human children to collect their screams to convert to energy, its offspring instead shows us the formative years of its main creatures. Monsters have to learn how to scare somewhere, right?

Billy Crystal and John Goodman reprise their vocal roles as Mike and Sully, the giant eyeball and the big blue fuzz. The pair meet as college freshman. Mike is the underdog overachiever, while Sully is the legacy student coasting by on the family reputation. They develop an instant dislike for one another, and the resultant unhealthy competition only leads to trouble. After they run afoul of Monsters University's frightful dean (a wicked Helen Mirren), they are kicked out of the scaring department. The only way to get back in is to set aside their differences and compete in the school-wide scare games and best the more prestigious fraternities and sororities. To pull it off, they have to get along with and inspire confidence in the misfits and losers in the only fraternity that would take them post-disgrace. 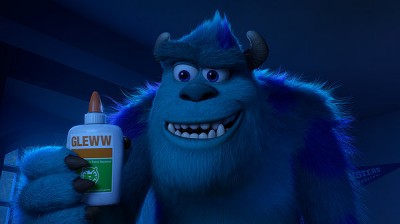 The story is pretty stale, a jumble of college movie clichÃ©s and throwbacks to 1980s cinema. It's basically the jocks versus nerds scenario slightly toned down to make it childproof. (A college movie with neither booze nor boobs? What is this? Garanimal House?) The clever concepts from Monsters Inc. are mostly gone, and except for the neat plot solution presented in Monsters University's climax, not much surprises here.

Luckily, the jokes are fresh and funny and for whatever else Monsters University lacks, there is no shortage of laughs. As with the best Pixar films, Monsters University delivers both great visual gags (stick around after the closing credits for a good payoff to an earlier set-up) and witty dialogue. Director Dan Scanlon never quite manages to generate the emotion that his fellows often fold into the humor, but there is nothing wrong with just throwing a party, I don't have to cry every time (even if I want to). His best tools are his excellent cast and the gorgeous digital animation.

In addition to Crystal and Goodman, Steve Buscemi makes a return appearance as the bad guy Randy, who now gets his secret origin, transforming from eager nerd to slimy villain. Stand-outs amongst newbies include Castle's Nathan Fillion as the head jock, Parks & Recreation's Aubrey Plaza as a snotty Greek Council President, and Charlie Day, bringing his wild-card act from It's Always Sunny In Philadelphia to voice Monster University's funniest new addition, the Muppet-like Art. Perhaps the funnest surprise, at least for Mad Men fans, will be hearing the voice of Freddy Rumsen (a.k.a actor Joel Murray) coming out of late-in-life returning student Don. Sometimes character actors like Murray are the best choice for animated films, even if their names aren't draws, largely because they know how to be characters.

Pixar has long since left the realm of basic animation, and their computer 'toons are just as cinematic as any live-action motion picture. It's not just about fully fleshed characters, but also the fully realized world they live in. The detailed backgrounds, and the way the camera moves in and around the scenes, help to erase the lines between reality and illusion. Even in a film populated with colourful creatures, it's easy to forget you're watching an animated movie. This is a more impressive feat than you might think. The animation in Monsters University is so good, Pixar risks turning the audience into dazzled gawkers. The drawing serves the story, and the story informs the animation--neither takes precedence.

The same can't be said for the cartoon short that precedes Monsters University. Saschka Unseld's The Blue Umbrella blends real-world photography with fanciful reimaginings of everyday objects. Though a technical triumph, the effect overshadows the script, which itself is very slight and far too reminiscent of Paperman, the Oscar-nominated mini that was coupled with Wreck-It Ralph last year. The Blue Umbrella is a nice demo, but it's otherwise forgettable. 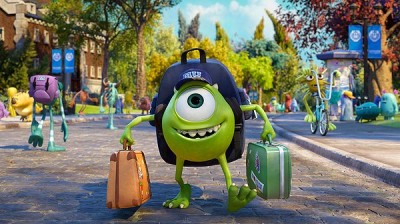