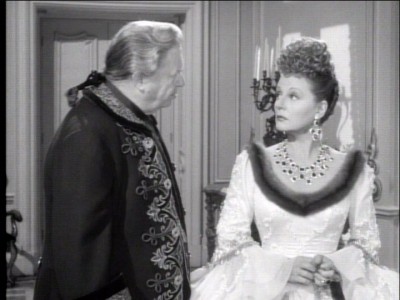 The "Lubitsch touch" -- that special tone, very light but rarely trivial, that marks off the clever yet genuinely tenderhearted comedy-dramas of the great German-expat Hollywood director Ernst Lubitsch (Trouble in Paradise, Ninotchka, etc., etc.) -- remains difficult (if eternally pleasurable) to try to define, but the 1945 picture A Royal Scandal offers an unusual opportunity to pin it down. It's about the legendary, equally feared and beloved 18th-century Russian Czarina Catherine the Great -- the same figure Marlene Dietrich played for director Josef von Sternberg in his 1934 masterpiece The Scarlet Empress. The two films' treatment of her provide a marked, clarifying contrast, a brilliant reinforcement that it's not story, but particular nuances of style and tone, that's the utterly definitive cinematic element: Sternberg's film, a delirious, intoxicating, excessive, worshipful, erotically intense act of genuflection, is rococo but laden with the gravity of pomp and pageantry, dead serious, his treatment of every tiny aspect of mise-en-scene and of Dietrich meant to inspire an almost masochistic awe in us (it works). Lubitsch's Catherine is played by Tallulah Bankhead as a hilariously mean and arrogant boss lady who has a heart well hidden somewhere under her boozy, wanton, punitive bluster, revealed only after a giddy, fast-paced 90 minutes of plot twists and banter between herself; the two other points on the film's love triangle, a handsome young military officer, Alexei (William Eythe) who catches the empress's eye, and Anna (All About Eve's Eve, Anne Baxter), a lady-in-waiting and Alexei's fiancée; and a strings-manipulating, gouty old advisor, Chancellor Liyitch (Charles Coburn) as softhearted as he is corrupt and self-interested (if that sounds like an impossible contradiction to you, you don't know Lubitsch), who would really rather Catherine make a romantic/strategic alliance with Frenchman the Marquis de Fleury (Vincent Price). A Royal Scandal is something like the other perfect extreme, the opposite of a heavy, sticky Sternbergian pageant or fever dream: Lubitsch's take is a blithely historically inaccurate, exceptionally good-humored, gentle deflating of its characters' pronounced human weaknessess -- ego, ambition, naiveté, excessive pride -- so that we can make out the good, kind, compassionate stuff paradoxically but inevitably mixed in there, too. 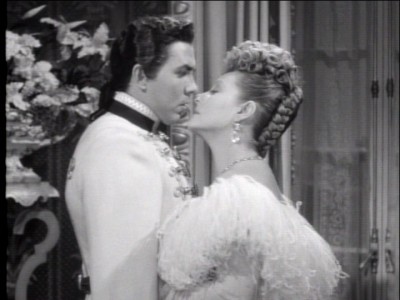 It was actually not Lubitsch himself, but his rising young protégé Otto Preminger (a star director, of everything from Laura to Advise and Consent, in his own right), who is credited with A Royal Scandal's direction: Lubitsch had to bow out due to illness, and Preminger completed direction under what guidance Lubitsch gave (storyboards, counsel, etc.). No-one seems to disagree, though, that it's a Lubitsch picture; it was his extensive preparations (uncredited but significant script tweaking, rehearsals, all the usual preparatory directorial choices involving casting and logistics and design) that Preminger seems simply to have happily carried out (for a project that was at its core a remake of a 1924 Lubitsch silent feature, Forbidden Paradise, based on the same Catherine the Great bio-play by Lajos Biro and Melchior Lengyel), and that impression is supported by the mixture of elegance, sophistication, and wised-up world-weariness coexisting with deep, optimistic affection for human flaws at any given point in the film. It's a bit (good-naturedly) naughty and carnally cosmopolitan, too, as was usually a major ingredient in the Lubitsch touch: Much fun is had with Catherine's mercurial, insatiable lustiness and her string of conquests, how good she thinks Alexei looks in a well-fitted white uniform, and how casting-couch quickly he's promoted to her inner circle after she lands him. It's this affair -- which almost leads to a coup and Catherine's overthrow when Alexei catches on to the fact that Catherine's interest in his high-minded edicts to help out Russia's peasants has been feigned in order to curry and keep his amorous attentions -- that causes the scandal from which the film's title derives, which threatens not only the true love between Alexei and Anna but, involving as it does the quick-tempered, authoritarian, and guillotine-happy Catherine, their heads, as well. 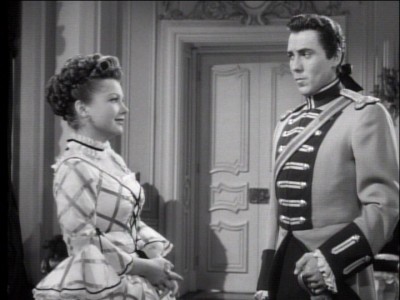 But we're never really scandalized and never really fear for anyone's life; that kind of realism and suspense is not the goal here, and more often than not the exchanges between Catherine, Alexei, Anna, and Liyitch could be James Stewart and Margaret Sullavan snipping at each other in Lubitsch's perfect The Shop Around the Corner, or the triangulated characters in Trouble in Paradise or Design for Living, all clumsily but doggedly negotiating the disconnects between their hearts, libidos, and loyalties to avoid pain and loss for themselves and one another. In A Royal Scandal, it's all given a "historical" appearance and décor, but the deadly-in-real-life political/historical facts are muted and minimized; although Lubitsch's eye, while less prone to overpowering sumptuousness than that of Sternberg, creates a well-toned palatial setting of glamorous luxury, very "18th-century" (in the same way he could convince us, through certain subtle mannerisms and numerous details in the mise-en-scène, that the studio sets of The Shop Around the Corner are "Budapest, Hungary"), the period/place brought most saliently to mind by this particular film isn't 18th-century Petersburg but Hollywood's '30s and '40s Golden Age, when the kind of intelligence, craft, and artistry that buoy A Royal Scandal from start to finish were ample resources, on tap from the booming and well-coordinated studios, able to be recruited to the vision of an intrepid, imaginative auteur like Lubitsch. 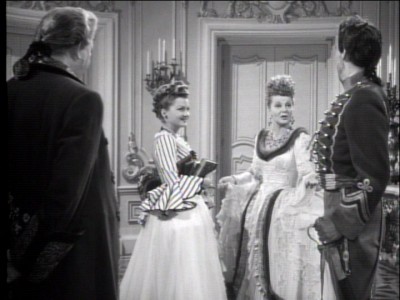 The actors, nominally directed by Preminger but all clearly under Lubitsch's spell, are the jewels proudly placed in the production's sterling, playfully glimmering setting of script and symphony of composition, camera movement, and cutting: Eythe and Baxter are perfectly charming, sweet, and funny as the naïve, idealistic young lovers, but it's the potential villains who hold their fates in their dubious hands who stand out in one's memory: Bankhead, a notorious, boozy scenery-chewer whose performance in Hitchcock's Lifeboat was over-the-top enough to warrant a special citation from Susan Sontag in her "Notes on 'Camp'," is perfectly cast, for precisely that "camp" quality, as Catherine, who in this iteration is prone to saying things like "I doomed you; I can un-doom you," and whose clipped, monosyllabic utterances of "shut up" to anyone and everyone come as fast, frequent, and staccato as machine-gun fire; it's a performance that should by rights launch a thousand brilliant drag-queen tributes. Coburn (used to great effect as Hugo van Cleve by Lubitsch two years earlier in Heaven Can Wait) is the film's secret weapon as Chancellor Liyitch, the grasping, manipulative, spying, corrupt power behind the throne; Coburn plays this bad old man as nothing more harmful than a tired-out, seasoned professional whose machinations and self-serving devotion to political expediency just means he wants to be comfortable and for everything to run smoothly and work out. There's nothing sappy or deluded about it; these are weak, deeply flawed characters whose foibles can lead to disastrous consequences, but Lubitsch's choices -- of material, of characterization, of aesthetic and dramatic emphases -- is generous towards them. Why shouldn't there be room, in a world where of course we want things to work out for uncorrupted Alexei and Anna, for their much more jaded but not really any less hapless elders to be ultimately endearing, too? A Royal Scandal is one more delightful reminder from Lubitsch's filmography that the wise, famous observation uttered in Renoir's Rules of the Game -- "The most terrible thing in the world is that everyone has their reasons." -- can lead to a humorous, teasing, tolerant, light humanism just as plausible as Renoir's equally generous but more melancholy interpretations of that great line. A richly comedic but open-eyed, expansive, unfailingly tolerant humanism -- that's one more way to say "the Lubitsch touch," and it turns A Royal Scandal to gold. 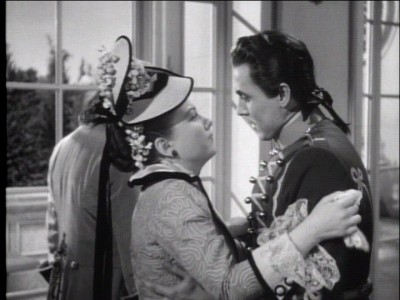 
This edition of A Royal Scandal is, as is often the case with manufactured-on-demand "archive"-series titles, a mixed blessing: On the one hand, we get the previously unreleased-to-DVD film in approximately its original theatrical aspect ratio of 1.33:1, which is a clear blessing. On the other hand, despite a title that comes up before the film begins claiming that the disc was "manufactured using the best source materials available," the transfer isn't very good. It has a muffled quality to it, the image distant and weirdly (if almost indiscernibly) horizontally-lined, sometimes appearing like the highest-quality VHS simply stuck onto a DVD with precious few mastering or restorative measures taken. Still, it's acceptably watchable, far from the worst of its kind, with no rampant pixellation or aliasing or other out-of-control compression artifacts; it just makes one regret the fact that it's probably not cost-effective to really get in there and carefully clean up every older film being released to disc.


The Dolby Digital 2.0 soundtrack is a higher-quality affair than the image. The film's original mono sound comes through with a surprisingly very rare occurrence of any crackling or muffling; all the dialogue sounds as rich and full as the by-then full-swing sound technology of the time allows for, and even Alfred Newman's score is relatively free of blare and tinniness. The overall aural experience of the film provided here is above and beyond what might be expected from a manufactured-on-demand disc. 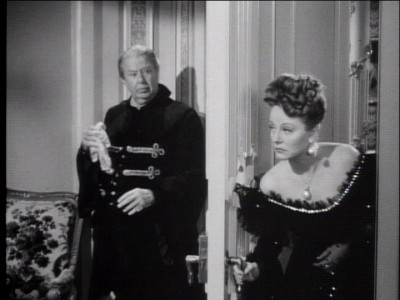 A Royal Scandal is (very) loose history as a lovable lark, full of sardonic but affectionate humor the way only Ernst Lubitsch could do it. It's actually a film of mixed provenance -- Otto Preminger (no slouch, either) was called into direct after Lubitsch himself fell ill -- but Lubitsch scripted, rehearsed, and otherwise set the stage; this is, after all, a remake of his own 1924 silent picture Forbidden Paradise, this time with Tallulah Bankhead playing fast, loose, and campily imperious with the legend of Russian Czarina Catherine the Great, and despite his absence during the actual shoot, the film is kissed with that famous, amorphous Lubitsch touch -- humorous, wise, affectionate, observant, but never heavy, moralistic, or sentimental. The film's exploration of the love triangle formed between Catherine, lady-in-waiting Anna (Eve Baxter), and handsome, idealistic military officer Alexei (William Eythe) is much less a history lesson than a very contemporary, fresh, delightfully funny riff on all the human failings -- pride, sycophancy, self-delusion, infidelity, jealousy, corruption -- on such exemplary display in a royal court presided over by such a figure as Catherine, who inspired devotion and dread in equal measure and, as it's written and directed here, was a role Bankhead was born for -- a scenery-chewer playing one of history's great scenery-chewers. The film is crafted with all the skill and well-developed technical and dramatic intuition of the Hollywood studios' Golden Age; the smart, rueful dialogue and jokes come briskly under Preminger's Lubitsch-facilitated direction, sharply hilarious but always tolerant, never mean or bitter despite its wised-up worldly wisdom. If it's not from precisely the top tier of the world-class Lubitsch's filmography (on the level of such essentials as The Shop Around the Corner, say, or Heaven Can Wait), it's still a highly enjoyable and beautifully done exemplar of the great director's sensibility -- an intelligent, clever, sweet, sophisticated historical comedy whose paradoxical but perfect modernity has left its rib-tickling freshness immune to the passage of time. Highly Recommended.