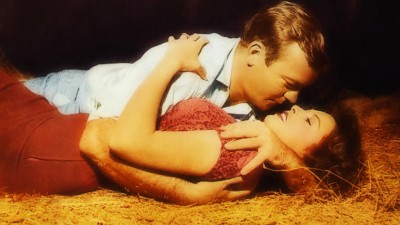 The 1958 adaptation of Erskine Caldwell's controversial novel God's Little Acre is a tonally jumbled oddball of a film. Director Anthony Mann (The Furies) and screenwriter Philip Yordan (Johnny Guitar) have cooked up a lusty mix of satire, slapstick, and Tennessee Williams-style family dynamics, making for a movie that is often hyperactive in its presentation, going over the top and then down into darker depths.

Robert Ryan (The Set-Up) leads the cast as Ty Ty Walden, the head of a Georgia farming family whose roots date back several generations. Ty Ty is convinced his grandfather buried gold somewhere on their property, and so he and his two sons spend their days digging up the ground rather than planting seeds in it. The misuse of such fertile soil is its own kind of broken covenant, but Ty Ty further tempts mystical fate by constantly changing the terms of a private agreement he made with God. The "little acre" mentioned in the title is meant to be a patch of the farmland where everything that is grown or caught is donated to the church. Ty Ty marks this patch with a wooden cross, which he promptly moves as soon as he suspects the buried treasure is underneath, promising God that the other little acre will be better.

Such games of musical chairs are not reserved for the land. There have been similar shenanigans in the dating pool. Ty Ty's son Buck (Hawaii Five-O's Jack Lord) is married to Griselda (Tina Louise, pre-Gilligan's Island, in her first film role), but Griselda previously dated Buck's brother-in-law, Will Thompson (Aldo Ray, Pat & Mike), and the two still keep the torch burning for one another. Will is an alcoholic driven to further drink by his lack of employment. Throughout God's Little Acre, Will threatens to take over the shuttered cotton refinery by force and put himself and his neighbors back to work. It seems nobody in this town has much to do, or is otherwise too busy getting up to no good. Will makes no secret of his lust for Griselda, and you can bet that as the weather grows hotter, so too will their passions.

Most of the acting in God's Little Acre is cranked up past the point of caricature. The boys yell and spit, and Ryan leads them on with a manic energy that only flags when the old man is humiliated. Tina Louise is the lone participant who plays it cool, which is ironic since it's her that is getting most of the local men hot and bothered. Her wardrobe does most of the work on that front. By contrast, Ty Ty's youngest daughter, Darlin' Jill (Fay Spain, The Godfather: Part II), prowls around like Blanche Dubois in heat. It's a dichotomy I wish Mann had developed further, these two kinds of sexual creatures. One is noticed naturally, the other insists folks pay attention.

Philip Yordan's script attempts to juggle too many things at once, making for a rather jumbled build-up. You've got the crazy old man searching for gold, the feuding brothers, the nympho daughter, the plight of the workingman, religion, politics, and romance all vying for screen time. It's hard to tell which direction God's Little Acre will go off in next. The film markedly improves, however, in its final half hour, when all these things crash together and the Walden's suffer a sobering comedown. The family character arc becomes clear: with their father in the driver's seat, the Walden's lost sight of their true purpose. It takes tragedy to remind them that they are a family with all the resources they need is just at arm's length and underfoot.

Mann does his best to contain everything, even as he and cinematographer Ernest Haller (Whatever Happened to Baby Jane?) construct their images with the same kind of hyper-real intensity as the actors bring to their performances. The weather and other aspects of the natural environment are appropriated and exaggerated for effect. In one gorgeous shot, Ty Ty stands over the pit where his sons are digging as billowy clouds pass behind him, creating a night sky that is both beautiful and surreal, bringing to mind the fields of cotton that are being sacrificed for greed. Later, as the attraction heats up between Will and Griselda, so too does the temperature at the farm. Sweat dots the cheaters' skin like rain.

Naturally, much of what made God's Little Acre scandalous seems tame in comparison to current mores. Had Yordan and Mann maybe laced everything together a little tighter, giving maybe a little more thrust to Will's mission to right the wrongs done to him and his co-workers, and amplifying Caldwell's original critique of how he had seen Southern society as having lost its sense of purpose, rather than relying so much on the sex and sin that idle hands get up to, God's Little Acre would have remained as potent today as it was in 1958. A little less caricature and a little more sincerity would have put it up there with the similarly intended films of Elia Kazan, rather than being just an entertaining rummage through the dirty linens of a more "innocent" time. 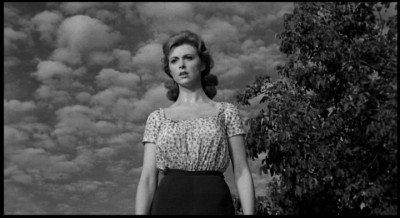 Video:
God's Little Acre is shown on Blu-ray at its original 1.78:1 aspect ratio. The black-and-white photography looks really good, with strong contrast between dark and light and a fine level of detail. You can see much of the dirt the Waldens are digging up quite clearly, and you could count every drop of perspiration on Tina Louise's skin, were you so inclined. Surface grain looks decent, lacking any signs of artificial enhancement, and though there are some marks on the print and at least one short sequence that looks a little beat up, the stability of the image is consistent throughout.

Sound:
The original soundtrack has been mixed in mono and is nice and clean, with good tones and no sign of extraneous noise.

FINAL THOUGHTS:
Recommended. Anthony Mann's lusty take on Erskine Caldwell's controversial novel God's Little Acre had the censors all in a huff back in 1958. The sight of spouse swapping and Tina Louise's cleavage was a bit much for them to handle. Louise is still sexy, but the soap opera is not nearly as scandalous all these years later. Still, the story of a Southern family who've lost their way has some good dramatic threads, even if it appears a tad cartoonish to modern eyes. There's a lot going on here, perhaps too much, and the whole movie is way over the top, but some good performances and lovely photography make up for any narrative confusion. 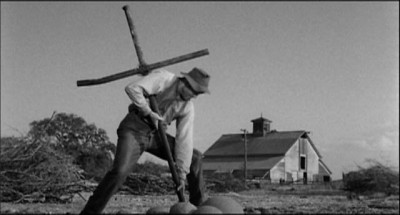