In the time between my review of the third season of The League being posted and the fourth season of the show coming to my greedy little hands, I'm not going to lie when I say that I have done a bit of cramming since then. I watched the fourth season as it was broadcast, watched the episodes again periodically when I had them on demand, and watched the prior seasons on [your preferred choice of provider of streaming internet content]. I have grown rapidly in love with the show featuring some Chicago professionals and their fantasy football league.

The third season of the show is actually left us finding out that is Kevin (Stephen Rannazzisi, Paul Blart: Mall Cop) won his very first league championship, nicknamed the Shiva, defeating his brother Taco (Jonathan Lajoie) in the process. The race for the league's loser found Ruxin (Nick Kroll, Get Him to The Greek) in a precarious situation, a shame considering his season two win. Meanwhile, Kevin's wife Jenny (Katie Aselton, Jeff, Who Lives At Home) is handling her pregnancy with the family's second child nicely, and in the background to a degree, the plastic surgeon and metrosexual Andre (Paul Scheer, Human Giant) and divorcee now single guy Pete (Mark Duplass, Do-Deca Pentathlon) continue their arcs unabated. 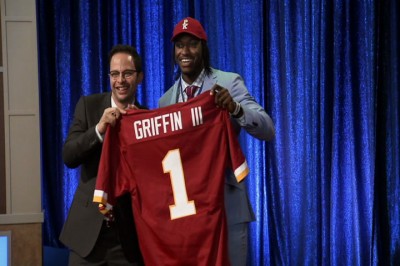 Shows like Curb Your Enthusiasm and It's Always Sunny In Philadelphia seem to share the general essence of providing outlines of stories for the characters to touch upon before unleashing the collective improvisational skills of the ensemble, and The League follows in those footsteps rather well. And the show's main cast, combined with recurring cast member Jason Mantzoukas (The Dictator) as Ruxin's brother-in-law Rafi, are equal to the task. The fourth season differs from previous seasons in that performers who are similarly capable in their improvisation skills make their appearance to be worthwhile. For instance, Curb co-star JB Smoove shows up in the season's seventh episode as a man in a wheelchair who has a fight with Pete over a pair of running shoes, and this story (combined with a racist player piano) makes for an underrated hilarious episode. Later in the season the show celebrates the holiday season, and a mall employee played by Mr. Show co-star Bob Odenkirk is nice to see, though the episode is slightly average. In addition, lesser known but just as capable improvisers like Ken Marino (Party Down) and Ike Barinholtz (The Mindy Project) provide their own individual and valued contributions to the show.

Similar to other seasons, the show sprinkles in the appearances of the NFL nicely and one lets them run their course despite any strains in the disbelief of the viewer. The cast does well by the athletes and generally gives them all moments that make the unfamiliar viewer laugh with and relate to them. All-Pro running back Adrian Peterson appears late in the season as a new boyfriend to a girl that Pete dated, and the resulting encounter leaves Pete with a perfect quandary between life and fantasy football.

For as funny as the show is (and it is pretty damn funny), there did appear to be some rehashed moments that I found uninspired and not entirely hilarious. Sure, during the course of the season Andre falls in love and leaves the show on a bit of a cliffhanger at the end of the year, but in the B story, Taco does something that is basically straight out of South Park. Earlier in the season, Rafi and Dirty Randy (Seth Rogen, The Green Hornet) reunite for an apocalypse porn that is just checking off boxes from the beginning of Season Three. It felt like a letdown. 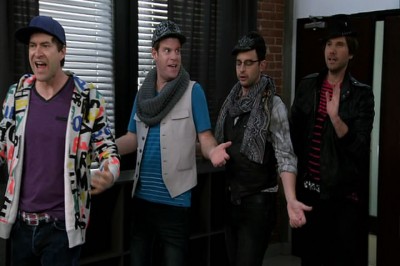 At this point after binging on so much of the show in recent months, I am still in love with The League, but I think it is fair to say that one can make a differentiation between Season Four and previous seasons. And if you want the short answer, this season is just good, rather than eye watering, breath catching funny. It is no knock by any means, I just hope it is not the new normal.


Another year where The League has 13 episodes and span two discs, and all appear in 1.78:1 anamorphic widescreen, consistent with their original airing. The discs look good, with lots of deep colors replicated nicely without saturation or noise issues. There is a moment or two of crushing in the darker lit scenes, but nothing that I am going to write a harshly worded letter over or anything. Fox gives the show a decent transfer.


Dolby Digital 5.1 surround on all episodes, which is both unsurprising and devoid of complaints. The jokes sound clear and clean in the theater and while the moments of channel panning and directional effects are few, but there are moments in party sequences and a car crash where the subwoofer fires off and makes for a surprising low end. Considering the source material there is very little to complain about here.


The extras, while funny are similar to those in previous seasons. Disc One has nine deleted scenes (6:49) which are funny though not hilarious. "Taco Tones" (:59) is one of the songs that Taco sings on the first disc, while "Rafi's Helpful Holiday's Hints" (1:20) is where Rafi provides some solid information and education. "Witchy Woman Podcast" (1:10) has the Andre silliness which was highlighted in the show. With Disc Two, six deleted scenes (6:21) are charming, while "Taco Tones" (1:20) includes the appropriate song on the disc. "Alt Nation" (13:47) is your ‘Line-O-Rama' for the season, while the Gag Reel (14:48) is pretty good to watch, particularly for Kroll's corpsing.


While the fourth season of The League carves out some new and welcomed territory for itself, other moments left a little to be desired. The show keeps moving on and I like it, but for fans looking to get into it for the first time, I would save this season for last. Not because one will get lost in a character's mythology or anything, it simply does not measure up to most of what the last two seasons have accomplished. Technically the show is more of the same visually and sonically, and the extras are the same drink but in a different flavor. Still worth checking out again while the fifth season hits the airwaves.