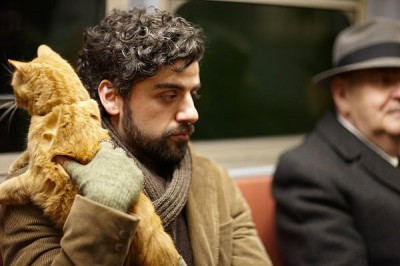 Sometimes, with some movies, it makes more sense to drop the critical analysis, to forget studying technique or considering the construction, and just talk about how the story moved you emotionally, how it felt in your gut when watching in.

Inside Llewyn Davis, the most recent effort from Joel and Ethan Coen, is such a movie. When I saw it last December, Inside Llewyn Davis really hit me where I lived. The story of the struggling artist--in this case, the folk musician Llewyn Davis, played by Drive's Oscar Isaac, searching for his place on the stage in 1961 New York--is one that has been oft-told, but rarely with such brittle fragility. Llewyn suffers from the dual artistic fears of thinking deep down you might be a sham and alternately being convinced that no one will understand your genius. He is a singer determined to show he is an authentic voice in a field overly obsessed with authenticity, peddling traditional numbers, playing the same songs night after night. "If it was never new, and it never gets old, then it's a folk song."

The old joke hits closer to the truth than Llewyn realizes. Everything he does has happened before and will happen again, but the pain of it will never stop feeling fresh. Llewyn is depressed, isolated, and doomed to repeat every mistake he's ever made. "You don't want to go anywhere," Jean (Carey Mulligan), one of the many people's he's wounded, tells him, "and that's why the same shit's going to keep happening to you, because you want it to." It's quite possibly the most important line of the movie, especially if you buy into the theory that Llewyn Davis is quite literally stuck in a loop. The Coens regularly reference mythology in their pictures, having built O Brother, Where Art Thou? on a Homeric foundation, and giving a shout-out to him here, as well. Llewyn's punishment is tragic in nature. For all the efforts he makes to fix things, no matter how much he ends up getting right, the circle comes back around. The incredible journey never ends. Inside Llewyn Davis doesn't start with a flash forward, it starts at the beginning and ends the same way, two beatings happening a full week apart.

This is the irony of his trip in search of opportunity and, ultimately, himself. Because Llewyn Davis is the only person he can ever be. 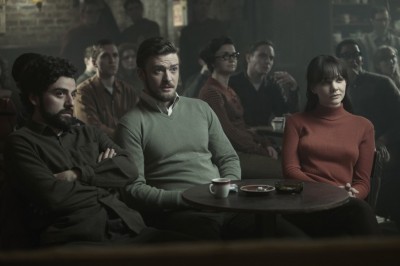 Inside Llewyn Davis opens with the singer on the hunt for money, a place to sleep, and a place to play. He performs on a novelty record (losing a bigger payday through his short-sightedness) and travels to Chicago just to have the door slammed in his face. In the process, he is insulted by a fading jazz legend (John Goodman) for not being a "real" musician, and himself insults another singer (Stark Sands) for being too acceptable to the audience. Later, when faced with a true-blue singer from the American heartland, he rejects her for being too true to herself and where she came from. Like many a man of mythology, it's hubris that shuts Llewyn down. He expects the club promoter (F. Murray Abraham) to go bananas for his music, but Llewyn fails to perform. He is asked to show what is inside him--the name of the movie is the name of Llewyn's one solo record--but it appears he is lacking on that front. He chooses to play him a song about protecting tradition ("The Death of Queen Jane"), and his voice is laden with feeling, but is it an honest expression? Is he just going through the motions? Or is his art so "inside" that no one else can really hear it?

Many have speculated that Inside Llewyn Davis is the Coens pranking the critics who have called their work cold and calculated and too reliant on cinema's past, answering their accusations with the most authentic movie about artistic inauthenticity possible. Llewyn's self-designed world is really a world of their design, the spiral pattern inside a seashell, twisting off toward a vanishing point. Amusingly, the one time Llewyn sings spontaneously--something he has resisted throughout the movie--it's for an audience of one, his father, and the reaction is for the old man to soil himself. The artist has given his all, and that's the best he can expect in return. To be honest, in this particular profession of mine, I vacillate between knowing how the old man feels and knowing how the Coens/Llewyn feel. I guess that's one of my loops to be stuck in.

Oscar Isaac is a revelation in this movie. Unlike Llewyn, he should have no doubt about his own abilities. Having grown tired of his villain routine in movies like Sucker Punch and Robin Hood (back when the routine was fresh), I admit to having very low expectations when I heard the casting. He brings far more to the role than his previous parts have allowed him to show. Llewyn Davis is arrogant and caustic and his own worst enemy, but this is part of his façade. Isaac carries the hurt with him in every shambling step, refusing to let his disappointment with family, friends, love, and music take charge. The irony of the performance is how vulnerable the actor appears playing a man who refuses to be vulnerable.

Can we weep for Llewyn Davis at the end? Sure. Do we believe he will improve? No, and that is why we weep. Is that reaction real? You bet. Which may be where the Coens have really succeeded. They have exposed moviemaking as being most effective when it's outright manipulation. The facts and the details are not permanent, they can be free to get it wrong, fudging dates and blurring the edges of different stories, because that stuff has never been true anyway. The only truth is what we find of ourselves inside Llewyn Davis, just like the true meaning of myths was always how we saw their lessons reflected in our real world. This fable is my life story as much as his. I am Llewyn Davis, and he is me. 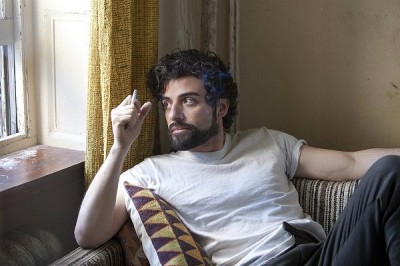 Video:
The 1080p high definition picture, shown at a 1.85:1 widescreen aspect ratio, is flawless. Colors are beautifully rendered, capturing the cold grays of winter, working with the muted hues to create mood and texture. Detail is strong, and the resolution is sharp. That tabby's fur burns like a hot fire on the screen, and you can make out every whisker.

Sound:
The main soundtrack is mixed in DTS-HD Master Audio 5.1, and it has nice balance. Ambient detail moves effectively across the speakers, while the musical numbers come through with a prominent warmth.

Extras:
The 42-minute "making of" focuses a lot on the music, including details about the actual New York folk scene of the early 1960s and Oscar Isaac's performance skills. It also branches off into usual territory, such as costuming and sets, with some special attention paid to working with that darn cat (or cats, as it were).

FINAL THOUGHTS:
I'm not sure if calling myself Llewyn Davis is a worse confession than the time when I wrote about identifying with Greenberg, but what the hell, I'm the one doomed to this life, judge all you want. If I've learned anything from my pal Llewyn, it's to never back off an unpopular opinion about who you are. Inside Llewyn Davis is basically a perfect movie as far as I am concerned. I suggested that one could ignore the technique, but that it's so well-made and so affecting is what also makes it so special. It's dark and it's cold and it's about music and mortality and self-doubt and perseverance and so much that matters. Up there with my very favorites of last year, and in the top pantheon of Coen Bros. efforts, too. Highly Recommended. 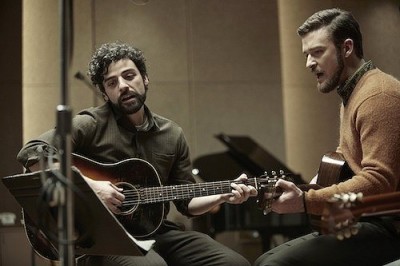