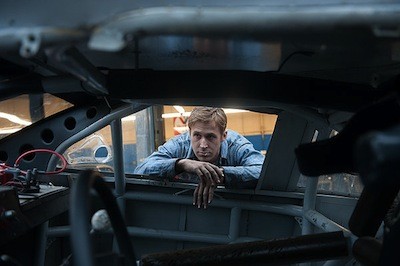 There is something to be said about a crime film where the criminal is merely a functionary. He has a job to do and he gets it done with focus and precision. Think Alain Delon in Jean-Pierre Melville movies like Le samourai and Le cercle rouge. Cold, calculating, and indefatigable. He has a target, he achieves the target, he moves on.

This is the kind of character that Ryan Gosling plays in Drive, the latest from the auteur of brutality Nicolas Winding Refn. The actor stars as "the Driver," no other name necessary. He drives. By day, he might drive as a stuntman in an action movie; by night, he might provide the getaway for a robbery. Regardless of the task, he approaches his duties dispassionately. His service is to deliver what is required, never deviating from the agreed-upon mission.

As these things go, a lack of personal attachments is preferred. It's less messy. The Driver has one colleague, his boss at the garage where he works on cars. This guy, Shannon (played by Breaking Bad's Bryan Cranston), also supplies the vehicles for his nocturnal assignments. One guesses Shannon doesn't ask what is going down, and it's not like the Driver would tell him. He says hardly anything to anybody. Luckily for him, he has that Ryan Gosling super power to make ladies melt, and so when the Driver starts hanging out with his next door neighbor (Carey Mulligan, An Education) and her son, he doesn't have to do anything but stare at her. It's actually kind of amazing. For a movie that has no actual sex, I feel like Drive had more carnal bedroom action than anything else I've seen in the last year. Someone could have held up a chicken egg during one of Gosling and Mulligan's staring contests, and that egg would've spontaneously fertilized. 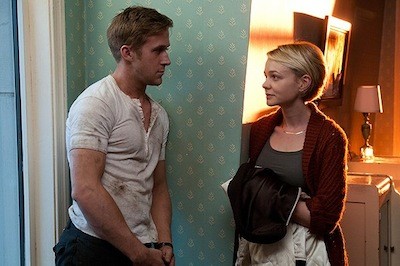 Opening the door for larger human relationships leads directly to trouble. A guy like the Driver can't ever know true happiness, and to start to desire it only brings complication. Shannon wants to buy a race car and put the Driver on the circuit, and to do so, he has to borrow money from a couple of gangsters (Albert Brooks and Ron Perlman). This puts the Driver on their radar. At the same time, the girl's husband (Oscar Isaac, Sucker Punch) gets out of prison and comes home. Only, he's into some bad guys for a lot of money, and if he doesn't pay up, those guys will hurt their family. To keep that from happening, the Driver will man the car when the husband robs a pawn shop. Along for the ride is an added passenger, as insisted on by the toughs who set the whole thing up. (She is Christina Hendricks, and if I have one complaint about Drive, it's that there isn't nearly enough Christina Hendricks. She's barely in the movie.) This is the first step in a big double-cross. Much violence is to follow.

If the plot sounds complicated, it isn't. For all the characters and narrative twists, the script by Hossein Amini (The Wings of the Dove), adapting a novel by James Sallis, is extremely efficient and elegantly constructed. With a main character that barely speaks, it's easy to avoid unnecessary exposition, and thus the story doesn't get bogged down in pesky motivations or in trying too hard to explain itself. Instead, Refn just keeps everything moving forward, letting action and situation suggest what it is we need to know about the Driver. He is a man with dark impulses, ones that often are beyond his control, and as the spot-on music cues suggest, curbing those impulses and embracing his humanity is the path to heroic redemption. The Danish filmmaker embraces a full '80s aesthetic with Drive, complete with neon pink credits and synthesizer music (courtesy of Cliff Martinez (Contagion, First Snow) and the bands Kavinsky, College, and other electropop groups). If Bronson was Refn covering Kubrick, and Valhalla Rising had a warped Malick aesthetic, then Drive is the director's version of a Paul Schrader film. DP Newton Thomas Sigel even captures the gritty look of the period, somewhere between a music video and a low-budget grindhouse drama. Despite Albert Brooks delivering an excellent joke about 1980s shoot-'em-ups, one suspects Refn is completely sincere in his presentation of bygone junk culture. 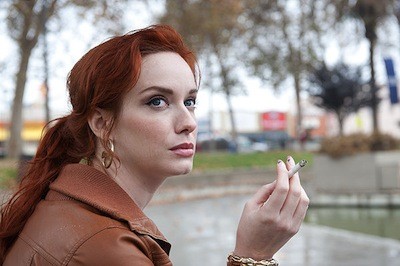 Refn keeps Drive so tightly coiled, that when he pops the springs, it can be truly unsettling. Quick dashes of gory violence are cringe inducing, with an onscreen aftermath that shows the characters are just as anxious about it as we are. Similar explosions in Ron Perlman's acting don't fare as well, he's hamming it up too much. On the other hand, Albert Brooks gets it just right. He steals every scene, using his well-known funnyman persona as a perfect counterbalance to the very bad way of doing business of the bad guy he's playing. Bryan Cranston is also good, showing tremendous reserve and avoiding caricature, and both Carey Mulligan and Christina Hendricks play against the macho posturing by making intelligent choices that allow them to be feminine without being weak damsels in distress.

Top of the heap, though, is Gosling, who sheds whatever tricks he might use in other films to play the Driver as blankly as possible. This is a man who gives nothing away, but that doesn't mean the performance lacks expression. Gosling is always within the moment, his eyes are constantly scanning the scene. He knows every piece on the board and where he stands amongst them. As the Driver's character arc slowly reveals itself, Gosling takes assured, deliberate steps to get to where he's going.

Drive is a perfect example of genre cinema's endless capacity to reinvigorate itself. For whatever familiar trappings Nicolas Winding Refn gathers around, what he builds from that collection is something wholly new and inspiringly original. Drive is one of the most compelling films of the year, establishing an unshakeable tension in its very first scene and never letting go of the mood until everything is done. You will inhale early, and it all happens with such speed and force, you won't even have time to notice you've been holding your breath until its done. 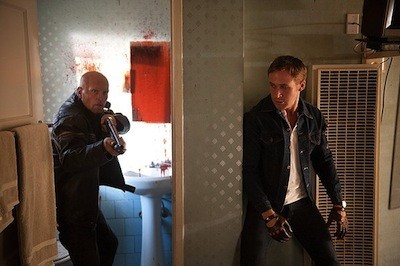