Please Note: The screen captures used here are taken from an earlier DVD release, not the Blu-ray edition under review. 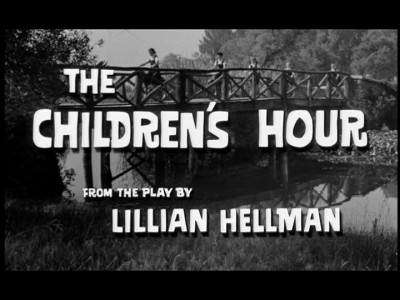 Often, well-meaning films that deal with issues important to their time lose their bite over the years. Certain social problems either lose their relevance or simply the manner in which they were dealt with no longer speak to audiences who have moved past a particular prejudice or problem. When older movies that tackle real-world situations manage to still be effective despite decades having passed, it's either because the original work is so good that the drama is timeless or, more tragically, because the real world hasn't improved enough to render its central conflict irrelevant.

The Children's Hour is one of those rare and wonderful--and, in its way, horrible--cases where both is true.

William Wyler (The Big Country) directs this 1961 adaptation of a play by Lillian Hellman (The Little Foxes), who collaborated on the screenplay with writer John Michael Hayes (Peyton Place). The Children's Hour stars Audrey Hepburn and Shirley MacLaine as Karen and Martha, two driven young women who have built their own private school for young girls in a well-to-do American community. Though the early years have been hard, the dual headmistresses are seeing their endeavor turn a corner toward success. With more than twenty students, they are finally in the black. The newfound stability even allows Karen to finally set a date for her wedding to the gregarious Dr. Joe (James Garner), who has been patiently waiting to walk down the aisle and start a family. 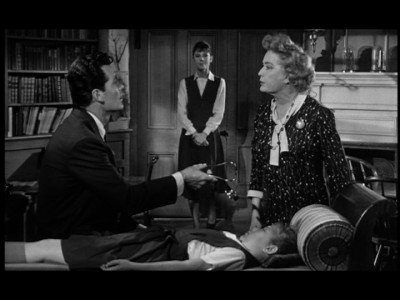 Good fortune turns to bad at the drop of a hat, however, when a vindictive young student (Karen Balkin) stumbles into her ticket out of the penalty box. One night, little Mary hears Martha arguing with her aunt (Miriam Hopkins), a past-her-prime actress who has been teaching at the school. The older woman accuses Martha of not wanting to share Karen with her fiancé. She labels their relationship "unnatural." Not knowing exactly what she heard but knowing it's bad, Mary tells her grandmother (Fay Bainter) that there is something between the two teachers. She also blackmails another girl (Alien's Veronica Cartwright) into backing her up. The suggestion that the relationship between Karen and Martha is more than professional quickly grows into a rumor and then a full-blown scandal. The parents in the tight-knit community pull their children from the school, and the accused women have their whole lives turned upside down.

Hellman's script walks many delicate lines. The nature of the accusation is only explicitly stated twice--once by Hepburn, once by MacLaine--but there is never any mistaking what is really going on. The righteous indignation, the fevered defense--it all falls under the sad fact that people want to believe the gossip. Impassioned debates about the truth only get at part of the matter, however, as one important fact has yet to come to light. What if one of the women really might be gay? Would that make the public accusations and shaming any more justified? The Children's Hour makes a case that it clearly is not, and somehow manages to avoid any debate over whether homosexuality itself is right or wrong, indicting the bigots by letting them be exactly who they are. 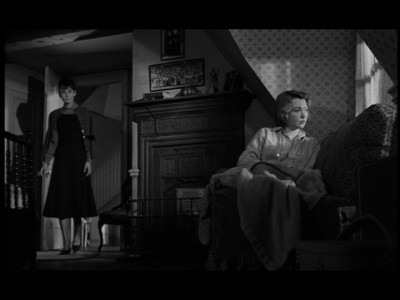 Granted, part of why Hellman and Wyler maybe don't tackle the notion head on is that it was the sort of thing that wasn't generally discussed at the time. (Though, given that only a year later Advise and Consent dealt with how similar accusations affected a male politician, clearly something was in the zeitgeist.) Even so, as with a rumor, the veiled suggestion can be all the more dangerous in the right hands. Wyler creates a feeling of dread using extreme compositions, with threatening characters--particularly that bratty little Mary--appearing in the extreme foreground while others are carefully arranged in the background, as if trouble looms and innocence must recede. Other times, the arrangement spotlights pain or confusion, putting the accused in the hot seat. Elsewhere, when all things are equal, a revelation is made with a perfectly balanced frame: one person confessing on one side, the other listening on the opposite edge of the screen. Wyler proves himself agile and willing to bend to the moment. In The Children's Hour's dramatic climax, he employs cinema verité/nouvelle vague editing techniques to add to Audrey Hepburn's panic, followed by shots that prove he is as good at visual suggestion as his writers are at verbal suggestion.

And that penultimate sequence should shatter you. It shatters me. Wyler knows his best tool is Audrey Hepburn's face, and if there is a dry eye or an unbroken heart left in any house where The Children's Hour plays when Karen sees what she sees, I am not sure you want to go on knowing that person. The true consequences of prejudice and bigotry are that someone is made to feel as if he or she is "other." As in, something other than normal, something other than what everyone else is, something other than "okay." The hurt and the isolation that entails can have a devastating effect on the person made to feel separate. While we have advanced in many ways and become more progressive, it doesn't take too long browsing the news to see neither prejudice nor homophobia are diseases we have cured in their entirety. 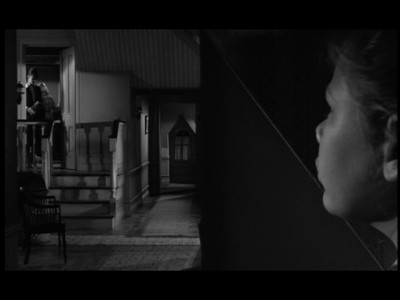 Which is what allows The Children's Hour to remain sadly potent, even in these more understanding times. It illustrates, though, that the best drama can still enlighten, and through smart storytelling, offer a way for us to empathize and to hopefully understand. It helps, too, to have as amazing a cast as Wyler has assembled here. Everyone is just fantastic. This may be Audrey Hepburn's finest dramatic performance. She offers strength and sympathy, but also heartbreak. MacLaine is also note-perfect, approaching Martha's struggle with nuance and understanding. It's impossible not to care about these women and what happens to them. Hellman doesn't take any easy ways out, either. All the characters make difficult choices, and not ones we will always agree with. James Garner's Joe is loyal and strong-willed, but not perfect. That he eventually falters hurts just as much, if not more, than any harsh words thrown at the ladies, precisely because he tried so hard to do the right thing.

I think this is only the second time I've seen The Children's Hour. Maybe the third. I do know that it's been over a decade. The DVD edition came out in 2002. This is despite being a huge (read: obsessed) Audrey Hepburn fan. The movie is just that powerful, it destroys me too much. At the same time, that last shot, framed tightly on the same face that will bring you to tears, manages to deliver hope. The defiant confidence of being right, it turns out, can be just as powerful as the hurt that precedes is. 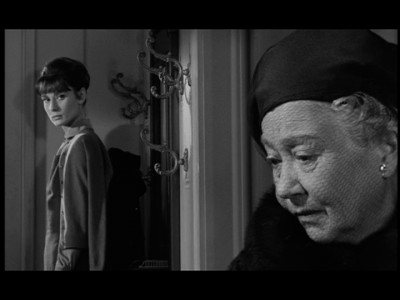 The Children's Hour comes to Blu-ray as a 1080p transfer at its original 1.66:1 widescreen aspect ratio. The black-and-white digital print is very good, with nice balance between light and dark and a clear picture. Quibblers will find the resolution a tad soft at times, and other instances where grain overtakes the image and the picture looks faded, but overall, the disc is free of blemish or any persistent problems. At best it's excellent, at worst inconsistent.

The DTS remaster of the original soundtrack sounds great, with clear tones and no real problems to speak of. Everything can be heard clearly and sounds as it should.

The Children's Hour is powerful social drama and just powerful drama period. The 1961 movie details what happens when one lie grows in a community, and the consequences it entails, especially when it touches on an unrevealed truth. Audrey Hepburn and Shirley MacLaine lead an amazing cast as two teachers at an all-girl's school accused of being lovers. William Wyler's cinematic adaptation of Lillian Hellman's stage play deals with the tough emotions and difficult questions that arise, keeping the focus on the humanity at the core, on the two people who would otherwise get lost in the misguided prejudice and hate. The Children's Hour remains an upsetting and crucial movie more than half a century since its initial release. Highly Recommended. 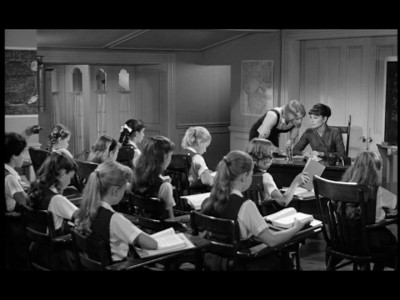