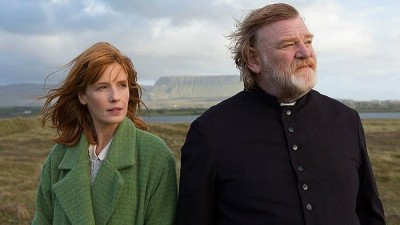 A priest and a man with a grudge walk into a confession booth. The priest opens the partition between and asks the man what he'd like to confess. The confessor tells the padre of the abuse he suffered by another member of the clergy, and how even if that despicable man hadn't already died, killing him wouldn't be satisfying as he was condemned and reviled anyhow. For people to really take notice, this fellow reasons, a legitimately good priest needs to die instead. The confessor with the grudge gives his counsel one week to put his house in order. Then that priest will be murdered.

This is the first scene of Calvary, the new film from John Michael McDonagh. It's the second part of a black comedy trilogy that started with the hilarious and tough-minded The Guard in 2011. All three films are meant to tackle different aspects of Irish life, and all of them will star Brendan Gleeson, who here plays the priest. Father James is a complicated man. A recovering alcoholic, widower, and father, he joined the Catholic Church late in life, following the death of his wife and his getting sober. Though presumably a true believer, he has the practical approach of a man with some life experience. He is well liked in the small seaside town where his parish rests.

Calvary covers the week between the warning and confrontation, if indeed there will be one. (Ah, ah, ah--no spoilers!) We follow Father James on his rounds, meet some of his parishioners. There is the adulterous wife (Orla O'Rourke) who is either being beaten by her husband (Chris O'Dowd, Bridesmaids) or her boyfriend (Isaach De Bankolé, The Limits of Control). There is the American writer (M. Emmet Walsh, Raising Arizona) contemplating the end of life, and the besotted financier (Dylan Moran, Shaun of the Dead) all alone with his money and treasure. There are also the guys down at the pub, like the socially dysfunctional Milo (Killian Scott) and the self-proclaimed atheist medical doctor (Aidan Gillen, Game of Thrones).

Adding further to his complicated week, James' daughter Fiona (Kelly Reilly, Flight) has come to stay following a suicide attempt. If you want to get a handle on how dark some of the humor in Calvary goes, both father and Gillen's doctor, Frank, make a joke about how Fiona made the classic error of cutting across her wrist and not slicing down the vein. This apparently is what passes as Irish sympathy. There are lots of savage moments like those, and also a plethora of quirky characters, but I wouldn't exactly call Calvary a comedy. 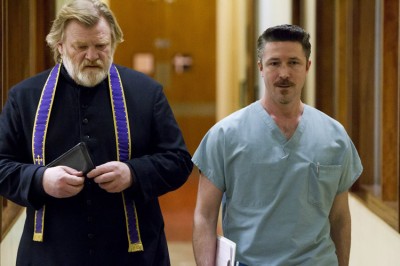 In fact, my one major quibble about the movie is how McDonagh sometimes overplays those small-town exaggerations. Aidan Gillen's showboating is distracting, as is the cartoonish male prostitute (Owen Sharpe) who speaks like he's reciting lines from a James Cagney movie. This caricaturing doesn't jibe with the deeper narrative. Cavalryis an emotionally complex, difficult film, and while the levity may be an attempt at gallows humor, it works better when McDonagh doesn't hang the jokes so high.

Luckily, a man with the gravity of Brendan Gleeson can bring any film back down to earth. The actor is in fine form here. He is prideful, and yet empathetic; insistent on what is right, yet capable of mercy. He has traded the weight of his past for the weight of the world, and he's got plenty of love to give even as he doesn't really let any of the townspeople get away with their tricks and shenanigans, whether the joke is on him or on themselves. He can't correct their behavior, but he can gently (or not so gently) remind them that it's wrong. The week that McDonagh has constructed for Father James will test the man's faith and his resolve. Whether he meets the killer or not is entirely his choice. He believes he knows who it is and could just have him arrested. He also could just not show up at the appointed place and time. Yet, when it comes down to it, what Father James wrestles with is how he might still help the troubled soul that is threatening his life. A crisis of faith requires either a refutation or a reconfirmation.

Some of this can get a bit messy, at least thematically, as McDonagh clumsily allows for some detours into meta dialogue. Father James, Fiona, and Dr. Frank all make references to dramaturgy and story structure, noting their own particular place within the story. I suppose it's meant to challenge our notion of free will. As a fictional construct, James' fate is predestined, as some religious folks think man's is, as well. It's an unnecessary conceit, and poorly constructed. This is real "first draft of your first college screenplay" territory, and not clever at all.

Despite the bum notes, McDonagh deserves some praise for his ability to show the eccentricities of his characters and his world without taking the piss out of them. He is amused by their actions and is maybe guilty of a little pity, but his jokes don't belittle the people or their way of life. Rather, seeing them through the Father's eyes, the audience is allowed to have sympathy for the hurt that leads them toward bad behavior and self-harm. The capacity this man has to love the imperfections of the folks in his care is what really makes Father James a great character. He won't take their crap, but he'll not dismiss them for it either.

Which only makes the impending doom, and some of what happens throughout the week, all the more heartbreaking. The emergent theme in all of Father James' counseling is for people to care about themselves and those around them. In the film's penultimate conversation, James and the rich man talk about detachment. It's what McDonagh will never allow his audience to experience. One you are in, you can't jettison yourself, you can't detach, no matter how touchy the events you are watching. To do so would be to betray the humanity on display.

And when you do make it through--and you will, I believe in you--check your eyes to see if they're still dry. 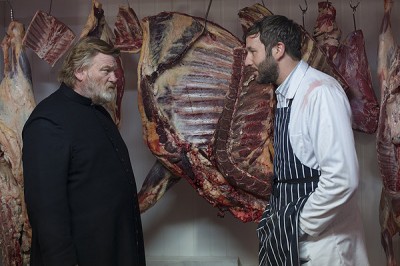