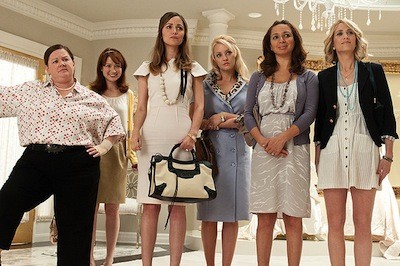 Much has been made of the dude-centric nature of the many comedies that have come out of the Judd Apatow laugh factory in the last several years. I'm not sure there's another modern producer who has carved out as known an identity as he has. Even as a fan, though, it's been hard to deny that in a lot of the movies he's made, including those he wrote and directed, the ladies get short shrift in terms of character development, even if I didn't quite agree to the severity of the problem. His name being in the credits for the new film Bridesmaids should go a long way to shutting that criticism down. Because not only is it all about the ladies, but Bridesmaids is damn funny and full of everything that makes Apatow productions so great. Honestly, it shouldn't be about what is inside the characters' pants, anyway, but what comes out of their mouths: good writing to make you laugh, period. Let's move on.

SNL regular Kristen Wiig, who also co-wrote the script, stars in Bridesmaids as Annie, a good-time gal who has seen better days. Her bakery shut down recently enough that the sign is still hanging on the empty storefront, and though her regular bootie-call buddy is none other than Jon Hamm, his nonchalance doesn't exactly make her feel good about herself. They don't call it a "walk of shame" for nothin'.

So, when Annie's best friend Lillian (Maya Rudolph, Away We Go) announces her engagement, Annie has a hard time being as happy for her as she should. To make matters worse, Lillian's new friend, the rich and beautiful Helen (Rose Byrne, Get Him to the Greek), wants to bump Annie out of being maid of honor, and she's organized enough and has the resources to do it. Annie's got to get it together or lose it all.

As the title implies, most of Bridesmaids focuses on the collective effort of Lillian's friends to make preparations for the upcoming nuptials and the parties that are supposed to come before. Also in the group are an overly naïve newlywed (Ellie Kemper from The Office), a sexually frustrated mother of three (Reno 911's Wendi McLendon-Covey), and the groom's sister, an obnoxious free spirit with a lot of gas. Melissa McCarthy from the TV show Mike and Molly plays Megan, and though the tag "a chick Hangover" is a mostly superficial and altogether stupid comparison, the role of the sibling tagalong does remind one of Zach Galifianakis' similar role in that film--particularly since McCarthy runs away with most of her scenes. Her go-for-broke energy is infectious. 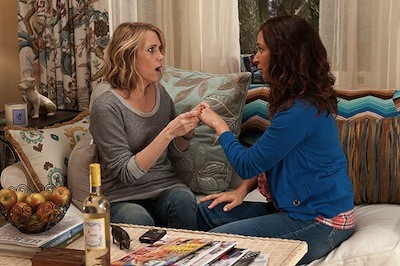 Which is also a good word to describe most of Bridesmaids. This is a comedy that really works an effortless magic, bringing the audience into the proceedings and basically turning it into one long vacation with friends. Bridesmaids is directed by Paul Feig, who has helmed a lot of quality TV, including directing an impressive amount of episodes of The Office and Arrested Development and producing Freaks and Geeks. Feig adapts well to feature-length comedy, showing a good instinct for how long to let a joke run and giving his performers free reign to find the humor in each scene. At the same time, he's not afraid to dial it down and let them be people. The best of Apatow-produced comedies balance the big gags with personal moments, and they manage to inject real emotion into the storylines so the movies are about something more than just getting chuckles. And when it's done well, as it is here, it doesn't feel forced or cloying. Bridesmaids, for all its poop and sex jokes, is a comedy about friendships, and the bonds between the characters are ones we can actually believe.

It helps, of course, that the cast is so impressive. It's about time Kristen Wiig got her own starring vehicle. For years she has impressed on Saturday Night Live and in bit movie roles (Knocked-Up, Adventureland) with her oddball characters and her knack for awkward line deliveries. She has a natural sweetness that works well here, alongside her ability to go for the joke no matter how embarrassing it might be. Wiig and Rudolph have a fantastic chemistry together, and their scenes have a loose improvisational feel that make them work as genuine friendship moments. There is also a heartfelt romantic subplot, with Annie having a flirtatious relationship with a nice guy police officer (Chris O'Dowd, The IT Crowd). There's a lot going on in Bridesmaids, but all the different comedic paths criss-cross nicely and Feig keeps the whole thing balanced so that you get just enough of everything. Bridesmaids is an R-rated comedy, and the filmmakers take that rating seriously. The humor is adult, but the writing is mature--it's a movie that really is for grown-ups.

When it's all said and done, Bridesmaids is a super entertaining, thoroughly likeable comedy. The male/female question really doesn't matter when the work is this good. Since when should movies be an either/or opportunity, anyway? Expect to laugh a lot and to care about what happens to these characters. That's the true Judd Apatow formula, and that's all you really need to know.