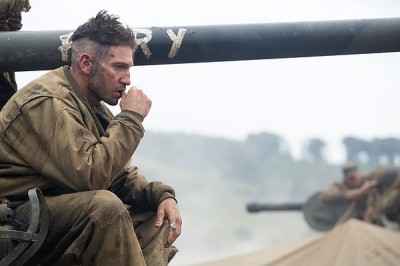 In case you haven't heard, war is hell, and in case you forgot, there's no more grisly reminder than the new World War II drama Fury.

The title of the movie refers to both a state of mind and to the nickname given to a resilient tank driven by its five-man crew. I nearly typed "its equally resilient five-man crew," but at the start of Fury, the team is down to four, having lost their gunner in what appears to be a particularly brutal battle. The guys return to base, led by their hard-as-anything sergeant, Doug (Brad Pitt), himself nicknamed "Wardaddy." The guys are tired and dirty and have long since left their innocence in the mud and blood of various battlefields; on the other hand, the replacement for the dead man is fresh and clean, and the wholly inexperienced Norman Ellison (Logan Lerman, The Perks of Being a Wallflower) was trained to be a clerk, not a tank driver, but now he finds himself in the middle of Germany as the Allies give a big push toward Berlin in hopes of ending the war.

Fury's two-hour-plus running time follows Wardaddy and his men as they aid that push, providing back-up to infantry and somehow staying a tread or two ahead of the explosions even as the other tanks around them succumb to German fire. Rounding out the platoon is Bible (Shia LaBeouf, Transformers), a true believer trying to maintain his faith in the face of so much death, and two hard customers by the name of Grady (Jon Bernthal, The Walking Dead) and Gordo (Michael Pena, Gangster Squad). The veterans attempt to toughen up the rookie, who barely has time to catch his breath before he's in the thick of it. His hazing is fairly standard for this kind of thing, though with added emphasis on how Norman's failure will end up getting his countrymen dead. 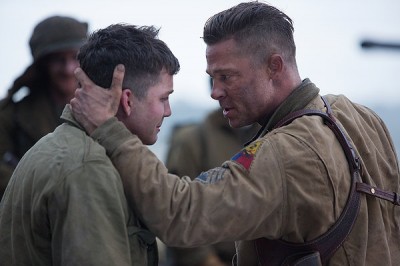 Writer and director David Ayer avoids the humorous camaraderie of more traditional World War II movies, instead lending real edge to the gallows humor amongst the troops and heaping doses of gore and brutality on the combat sequences. Fury is not for the weak of heart, nor for those looking for cheerleading or glorification of war. While it's clear the filmmaker's point of view is that these men are heroes, he is more concerned with the price their heroism tasks on their souls than he is inflating the nobility of their cause. The true distinction between Norman and the men he is joining is not how many kills they've tallied, but how many other men they've seen die and the knocks they've taken themselves. They all bear physical scars, and they share bad memories. Yet their true skill appears to be in denying that this stuff matters in the moment.

Plot-wise, the drive here is fairly relentless. The Fury goes from location to location, with one pause for R&R. This respite costs a heavy price of its own, of course, and the day that Wardaddy and Norman spend with a couple of German girls "playing house" turns ugly, if only to underline that good men do bad things and it's best not to rest on one's laurels when the next mortar shell could be being loaded as they speak. This mid-section provides both the finest sequence in Fury and one of the most awful. The aftermath displays all of Ayer's worst instincts. He is desperate for Fury to mean something, to not just be another war film, but to also allow him to exercise his literary pretentions and really say something. Of course, this is a visual medium, and someone should make "show, don't tell" T-shirts for the crew to wear on Ayer's next endeavor. I've seen my fair share of Andrzej Wajda films, too, don't go trying to sneak a white horse by me, fella. 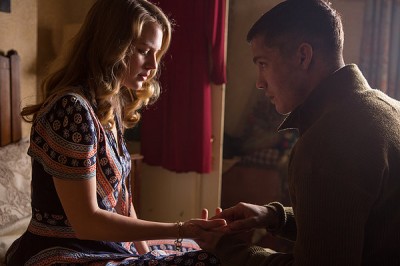 Fury falls flat every time one of the characters speechifies, every time Wardaddy reminds his soldiers why they are fighting or when Norman has to make a tough decision to show he's becoming one of the guys. These heavy words are further burdened by Steven Price's obnoxious scoring. The Attack the Block composer lays it on thick here, pushing the big moments harder than necessary. Brad Pitt is already taking lots of guff for producing a starring vehicle seemingly designed to attract nominations during the coming awards season, but it's Price who really baits the hook.

It's all a little too overwrought, and it ends up working against what Ayer is otherwise accomplishing. Fury is an intense war film. The firefights are dirty and chaotic, favoring ass-clenching terror and the occasional strategic maneuver over balletic choreography, and the consequences are obvious. We don't need to have them explained, they are devastating enough on their own. The technical wizardry Ayer and his team employ to make the warfare appear tense and dangerous is fantastic and horrifying. The carnage speaks volumes, as do the pauses that follow, when the men struggle to hold it together while the adrenaline drains from their bodies. These are the moments when the actors really earn their paychecks, not when they are making grand proclamations or even when they are horsing around.

Fury can be a difficult movie to assess. It's a dreary experience, shot under perpetually gray skies and with very little genuine cheer. This is as it should be, though; victories of this kind are hard-won. Yet, some might find the blood and guts stuff as off-putting as I found all the self-congratulatory back patting. Fury is not for the squeamish nor for those who like clear-cut morality rendered in easy to discern hues of black and white. I think the movie's strengths definitely outweigh its weaknesses, but it's also not a movie I'm going to rush out and see a second time, at least not without a flask or something else to steel my nerves. 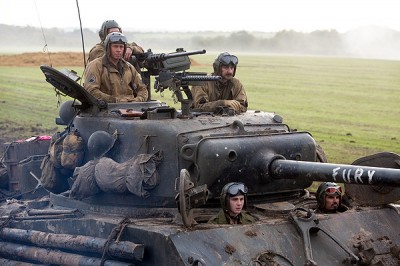