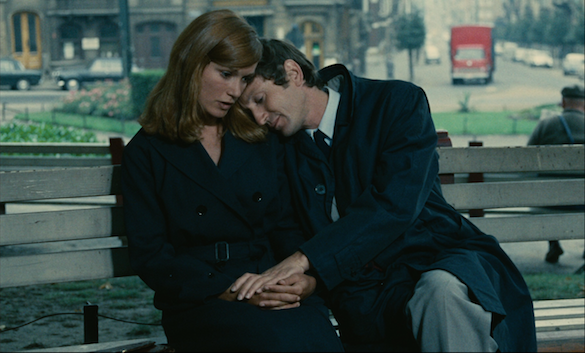 The Blu-ray roll-out of neglected gems from French director Alain Resnais (Hiroshima mon amour, Last Year at Marienbad) continues with this exemplary restoration of Je t'aime je t'aime ("I love you I love you") from 1968. Je t'aime je t'aime is a time travel movie with more in common with the minimalism and romantic melancholy of Chris Marker's La Jetée than it has with, say, 12 Monkeys*.

One main aspect of Je t'aime je t'aime that distinguishes it from most time travel stories is that the main character can only travel to the past, and he is unable to change it. This character is merely afforded the opportunity to relive a time he has lived before. It's a conceit that calls to mind the scripts of Charlie Kaufman, and unsurprisingly Michael Gondry has stated that this film was an antecedent to Eternal Sunshine of the Spotless Mind.

After a failed suicide attempt, Claude Ridder (Claude Rich, The Bride Wore Black) is recruited by a group of scientists to try out their new time machine, untested on humans. Claude has failed to get a new lease on life, post-self-inflicted gunshot, so he figures why not? If the experiment goes wrong, he wanted to die anyway.

The plan is to send Claude back exactly one year, to revisit one minute. Claude is given a sedative and laid into an apparatus that resembles a giant, lumpy, hollowed-out head of garlic that has been made out of beanbag material. The scientists go to work, and suddenly we see Claude snorkeling over a patch of coral reef. Success... right?

Except the moment keeps repeating, like a stutter in time. And soon, Claude is flitting in and out of the past, finding himself back in other moments from his life. The experiment has gone wrong!

Resnais and writer Jacques Sternberg use this set-up to provide a mosaic of moments from roughly the past decade of Claude's life. Not coincidentally, this time period neatly contains Claude's long-term romance with the beautiful but often depressed Catrine (Olga Georges-Picot, Successive Slidings of Pleasure). Each revisited moment usually consists of a single shot that ranges in length from a few seconds to over a minute.

Following this approach, the story has been thrown together meticulously. Sternberg reportedly wrote nearly a thousand little vignettes in the life of Claude Ridder, and then gave it to Resnais to distill and organize as the director saw fit. There's usually not a chronological connection from moment to moment, but there are sometimes thematic connections. These connections clearly demonstrate Resnais exercising his authorial intent, but they also effectively suggest that Claude's unconscious desires are having a significant impact on the way that the experiment malfunctions.

We soon find out that Catrine is dead, and not too long afterward we find out that Claude considers himself her murderer. Is he really to blame or does he just blame himself for whatever happened? Resnais lets his central mystery linger and build, and he only gives us drips and drabs throughout the film relating to Claude and Catrine's final night together.

The murder (or potential lack thereof) helps color the other elements of this patchwork portrait. Claude is a published author, we learn, but then we see him spend years and years of his life prior to that, wasting his energy in exhausting, boring day jobs. Claude and Catrine banter sweetly about the supremacy of cats over all other species, and they fight about Claude's infidelity. Claude is prickly, darkly funny. Catrine is contemplative, sad. Time and its passage resurface as fascinations for Claude at different points, which hints at the notion that this whole time travel scenario is actually an Occurrence at Owl Creek Bridge-type last thought of a regretful dying man after he pulled the trigger (the film neither explicitly confirms nor denies this interpretation).

Claude Rich is phenomenal in this film, delivering a subtle, well-observed performance that gives us a sense of the changes in his character at different ages purely through behavior (I don't think they even bother to give Claude a different haircut at any point in the film as a visual signifier). In his booklet essay accompanying the new Blu-ray, critic Jonathan Rosenbaum notes that Resnais felt that he made a mistake in casting Olga Georges-Picot because she comes off too one-note and same-y as Catrine. I can understand that impression, but I found her portrayal quite truthful and touching, and it certainly does not derail the drama or the story.

Je t'aime je t'aime is an extraordinary film that was largely forgotten during the tumult of May '68 in France. Its reputation has grown over the years, and here's hoping that this outstanding new restoration will offer the opportunity for the film to gain a significantly larger fanbase.

*See what I did there? I thought you might have. 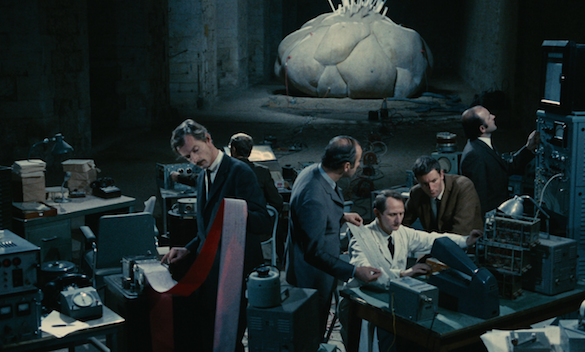 The Blu-ray
The Blu-ray is packaged with an attractive booklet, featuring an essay on the film by critic Jonathan Rosenbaum.

The Video:
Je t'aime je t'aime was recently restored for select theatrical engagements, and this stunning AVC-encoded 1080p 1.66:1 transfer reaps the benefit of that meticulous work. The image is clean and vibrant, with excellent fine detail and a consistent film grain structure. The palette tends to be a bit cool, but the colors are nicely saturated. Shadow detail is decent, but cinematographer Jean Boffety seems to be intentionally letting the light drop off sharply in darker shots. No noticeable digital compression issues or crushing.

The Audio:
The French DTS-HD MA 2.0 audio (with optional English subtitles) is also nicely cleaned up, with no discernible flaws or damage. A pretty narrow soundstage, but Resnais definitely exploits dramatic shifts in room tone to create a sense of displacement in time and location. The choral score by Krzysztof Penderecki is haunting and effective, to say the least.

Special Features:
Apart from the HD trailer, these all seem to be HD upconverts of SD-quality bonuses originally featured on a 2008 French DVD of the film.

Final Thoughts:
Je t'aime je t'aime is one of director Alain Resnais's greatest films, but the majority of film viewers don't know it yet. Quietly brain-teasing and emotionally affecting, it paved the way for films like Defending Your Life and Eternal Sunshine of the Spotless Mind, which view romance through the lenses of memory and regret. The new restoration looks and sounds wonderful, and the bonuses are pretty good too. Chances are, you've never heard of this film. You need to fix that problem now. DVD Talk Collector Series. 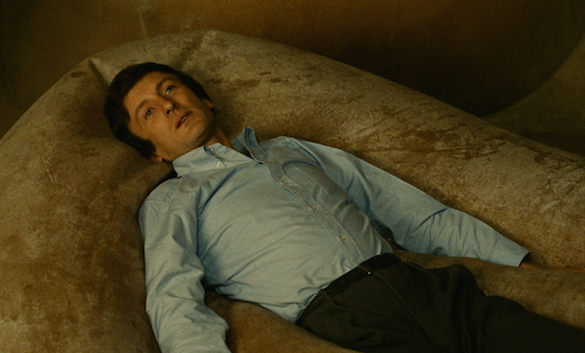