Wild in the Streets 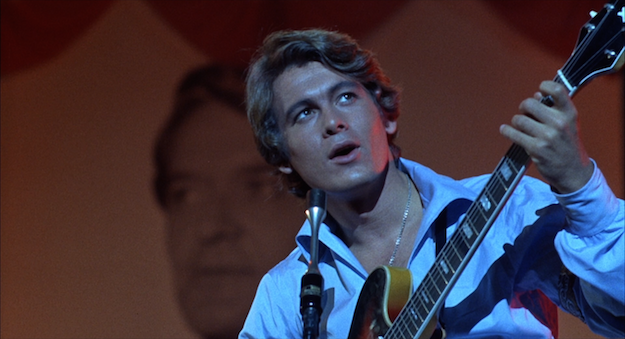 Wild in the Streets is a weird little teensploitation flick-cum-cultural satire from 1968. It's pretty effective as entertainment. It's absolutely fascinating as an artifact. But it's a bit too coy about its point-of-view to be effective as a social critique. Writer Robert Thom (Death Race 2000, The Witch Who Came from the Sea) adapts his own short story into an inventive yarn about a misfit who becomes a pop star and mogul, then decides to enter the political arena as well.

If that sounds a little bit like Budd Schulberg and Elia Kazan's satirical masterpiece A Face in the Crowd, well, it kind of is. Except the twist here is that our lead character, Max Frost (Ryan's Daughter's Christopher Jones), wants to enfranchise young people and give teenagers as young as 14 the right to vote and to hold office, since they make up the majority of the U.S. population. He wants to turn the tables so that "old" people, which here means anyone over the age of 30, are the ones who are marginalized instead of the smarter, hipper, and in-touch kids.

It's fascinating to examine the generation-gap conflict at the center of Wild in the Streets and recognize its evergreen qualities, considering the way people over 30 currently dismiss and denigrate millennials, and presumably vice versa (I'm "old" now, so I only can speculate). But it's even more fascinating to think about how the "young" Baby Boomer majority at the center of this flick have aged nearly 5 decades and mostly didn't "die before they got old," to paraphrase The Who's anthemic "My Generation." Both Thom and director Barry Shear (Across 110th Street) were roughly 40 when Wild in the Streets came out, so they no doubt intuited the folly of young folks reflexively mistrusting age and experience -- saying, "30 is death!" -- even as the filmmakers simultaneously zero in on the reasons for youth rebellion with a decent amount of sympathy.

It's this pseudo-even-handedness that makes the film hard to track thematically. Starting with a prologue where our anti-hero's decidedly suburban parents (played by Bert Freed and a top-billed Shelley Winters) warp Max's mind with their sexually repressed attitudes and outsized obsession with material objects, the film appears to have its tongue planted firmly in its cheek. This vaguely kitsch vibe continues as the film segues into a proto-Beyond the Valley of the Dolls look at Hollywood pop star decadence. Max heads up the hottest band in the nation, which is peopled with outsized personalities, like the always-nude former child star Sally LeRoy (Diane Varsi), smarmy one-handed guitarist The Hook (Larry Bishop, later the auteur of the misbegotten Mad Dog Time), gay (but not flamboyant) child prodigy Billy Cage (Kevin Coughlin), and, dig this, a black drummer named Stanley X (a sadly under-utilized Richard Pryor). When they're not captivating crowds with fairly credible rock songs, many written by famed duo Barry Mann and Cynthia Weil, Max's band indulges their hedonistic urges in his palatial spread. 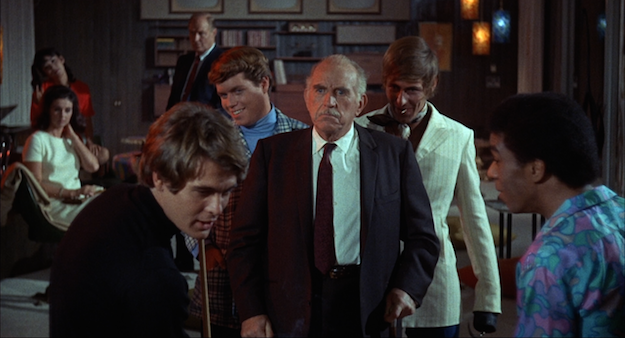 Pop stars wield a significant amount of sway over their young fans, which is why ambitious politician Johnny Fergus (Hal Holbrook) latches on to Max as a political ally, who can get his "troops" to support Fergus and bolster his young, progressive image. But Max doesn't buy the 37-year-old Fergus as "young," and uses Fergus as an entry point to gaining political power for himself, his friends, and his pro-youth, pro-hedonism ways. He inspires dissatisfied teenagers to take to the streets and protest for control of their own lives. Somewhat inevitably, this leads to a clash with police that results in the death of many non-violent protesters; it's a sequence that would seem like an on-the-nose takedown of the Kent State shootings, where 4 students were killed and 9 were wounded by the National Guard, if not for the fact that Kent State happened two years after this movie came out.*

Wild in the Streets is probably best remembered for its Twilight Zone-ish final act, where Max and his friends seize power and force all the over-30s into re-education camps to be force-fed acid and made to let go of their hang-ups, baby. The main drawback is, that while these concluding passages are the most striking, they also make the least damn sense. Sure, absolute power corrupts absolutely, but is that really what this flick was getting at the whole time? It didn't seem like it before. It doesn't help that our central character, Max Frost, is so aloof that it's hard to get a bead on him. Is he a well-meaning kid at his core, or a Machiavellian tyrant-in-waiting from the start?

This ambiguity would be more interesting if it seemed intentional, rather than a product of Thom and Shear's scattershot tonal approach. Shelley Winters feels like a cartoon of an overbearing mother for most of the film -- even going so far as to hippie-fy her lifestyle to regain the affection of her boy -- but we're supposed to feel bad for her when she is dealt her comeuppance. Ed Begley plays a stuffed-shirt politician opposed to Max's crew, who nonetheless makes some arguably valid points in moments where his character is supposed to be painfully out of touch. Writer Thom's then-wife Millie Perkins is also on-hand as the politician's wife, possibly to evoke Jackie Kennedy or maybe just to remind viewers of her role in The Diary of Anne Frank during the film's fascist finale.

So... It's a muddle, but it's not exactly a bad flick. As he demonstrated in his TV work, like Here's Edie, director Shear has an eye for interesting compositions, and the Oscar-nominated editing by Fred R. Feitshans, Jr., and Eve Newman gives the film a jazzy rhythm. The performances are fine, and the story is unexpected. It would certainly make an interesting triple bill with A Face in the Crowd and Ken Russell's Tommy.

*This is not the film's only eerie foreshadowing of real-life events. In one scene, Kevin Coughlin's character Billy says he figures he won't live much past 30. In real life, Coughlin was killed by a hit-and-run driver shortly after his 31st birthday. 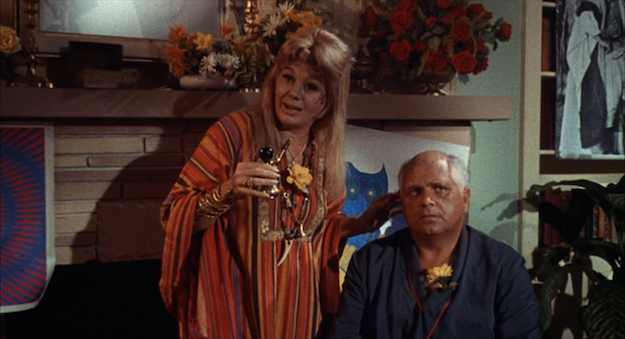 The Video:
Detail fluctuates throughout this AVC-encoded 1080p 1.85:1 transfer, with some shots looking crisp and detailed, while many shots look essentially soft. Colors are consistently saturated, although skin tones skew toward a ruddy brown. Film elements are in pretty good shape, with only sporadic dirt and debris appearing onscreen.

The Audio:
There is no noticeable damage to the DTS-HD MA 2.0 mono audio, although the mix is particularly narrow and limited. In general, the music and dialogue blend together well, although sometimes the dialogue gets a little lost in mumbly line readings. Thankfully, the English subtitles track is much more accurate than in some of Olive's initial efforts at subtitle-making.

Final Thoughts:
Wild in the Streets is an intriguing Vietnam War-era cultural artifact that attempts to merge counterculture exploitation with social satire. It doesn't totally pull it off, but it offers plenty of interesting visual moments and one legit hit single, "Shape of Things to Come." Recommended. 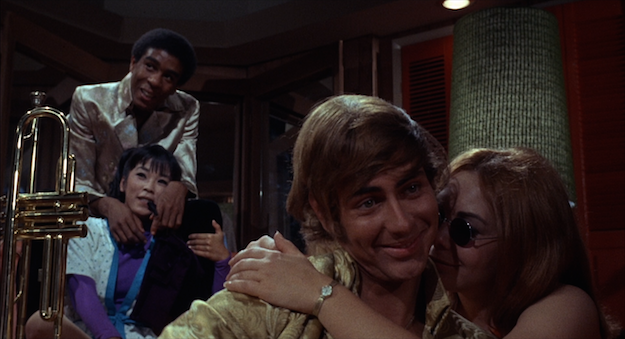