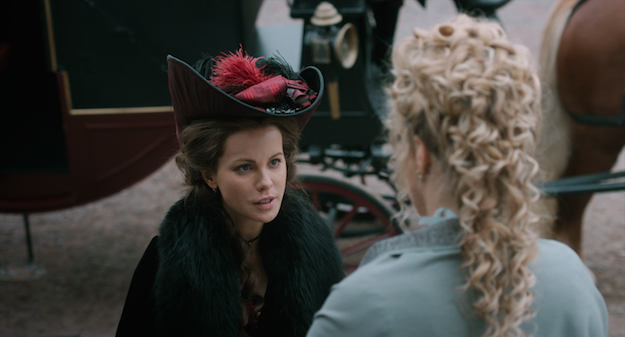 We are long past the great Jane Austen movie boom of the 1990s, which delivered such gems as Emma Thompson and Ang Lee's Sense and Sensibility, Amy Heckerling's Clueless, and Patricia Rozema's Mansfield Park; and while movie-makers have remade and riffed upon Austen's writing in the intervening years, it seems like they have mostly stuck to the hits (i.e.., four versions of Pride and Prejudice, by my rough count).

Now, along comes Whit Stillman, the modern master of the comedy of manners, who has been essentially making Jane Austen movies this whole time without going to the trouble of making a straight adaptation. Leave it to Stillman to dredge up a lesser-known Austen novella (Lady Susan), pair it with an unrelated Austen title (Love and Freindship, although he fixed the spelling), and make it the basis for his newest film.

Unsurprisingly, it's a match made in movie heaven. Lady Susan is the exact kind of likably unlikable character that Stillman excels at writing, and Love & Friendship is stuffed full of eloquent, tart dialogue. Stillman also reunites with his Last Days of Disco leads, Kate Beckinsale and Chloe Sevigny, and they fit as successfully into Austen's upper crust, turn-of-the-19th-Century England as they did in Stillman's haute bourgeoisie 1980s New York.

Beckinsale plays Lady Susan with a tricky mix of strategic cunning and a total lack of self-awareness that allows her to extemporize in the same measured vocal cadence about how much she adores her family and friends before confiding about how she intends to get the better of them. Lady Susan is refined, spoiled, dastardly: a con woman who most enjoys tricking those who believe they have caught on to her tricks.

Just such a person is Reginald DeCourcy (Xavier Samuel), a handsome young man who knows of the widowed Lady Susan's reputation as a schemer and nonetheless falls under her spell. Reginald's family, most particularly his sister Catherine (Emma Greenwell), try to untangle Reginald from Lady Susan's web, but his only hope is that Lady Susan's affection for the extremely married Lord Manwaring (Lochlann O'Mearáin) might somehow inspire her to loosen her grip.

In the meanwhile, Lady Susan wants to make certain that if she cannot yet guarantee her own marriage to a wealthy man, then she can arrange it for her daughter Frederica (Morfydd Clark). Unlike her mother, though, Frederica is a sweet, intellectual girl, who has no interest in being married off for money. It certainly doesn't help that the rich man Lady Susan has selected, Sir James Martin (Tom Bennett), is a total idiot who doesn't recognize the novel "tiny green balls" on his plate when peas are served to him at dinner.

Love & Friendship eschews many of the trappings of the romamtic comedy, but even so, it should come as little surprise that the film begins to find its sense of purpose as it hints at a possible compatibility between young Reginald and young Frederica -- even as Lady Susan derives pleasure (as do, one suspects, Jane Austen and Whit Stillman) from thwarting the easy coupling of these two.

Chloë Sevigny appears as Lady Susan's American confidante, Alicia Johnson, who savors hearing about her friend's exploits and sometimes is complicit in her schemes. Her older English husband, played by the ever-delightful Stephen Fry, is fed up with their acquaintance and threatens to send his wife back to Connecticut if he catches the two women together again.

In a film full of note-perfect performances, Tom Bennett steals the show as the boneheaded James Martin, whose unselfconscious blurts of wrongness arguably make him as fascinatingly bold as Lady Susan herself. Bennett's timing, however, wrings maximum awkwardness from all of his exchanges while delivering something smoother and more satisfying than much of today's cringe comedy.

Better Austen adaptations often successfully dodge the stereotypical stuffiness of period-set films, but even your first-rate Austen flick rarely reaches the level of acidic wittiness achieved by Love and Friendship. If you are a fan of Austen's work, this film certainly comes recommended; but if you're looking for sweeping, hard-fought-and-won romance, then maybe you should look elsewhere. 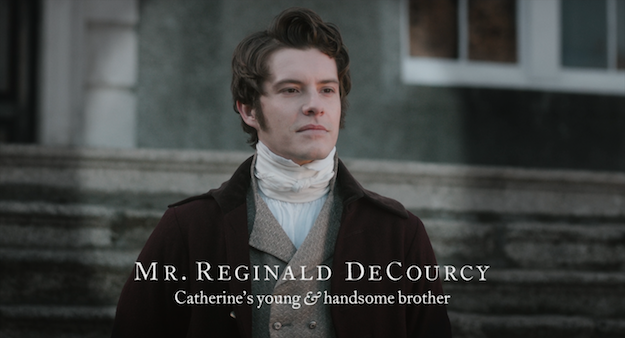 The Video:
Sony does not drop the ball in translating this new production to home video. The AVC-encoded 1080p 1.85:1 image is pristine. Color saturation and the level of detail are both excellent, and there are no major compression or motion issues.

The Audio:
Naturally, with a Whit Stillman film, dialogue is the primary component of the DTS-HD MA 5.1 surround audio, but it comes through with complete crispness and clarity. Gentle atmosphere in the surrounds and interstitial music cues give the back speakers something to do. On the subtitle front, the disc offers English SDH, as well as regular English and Spanish subtitles.

Special Features:
Apart from a number of coming attractions previews for other Sony releases, the disc only offers...

Final Thoughts:
A superb comedy of manners from Jane Austen and Whit Stillman. Any Stillman fan who felt slightly let down by the uneven Damsels in Distress will be heartened to find that this relatively infrequent filmmaker has successfully shaken the rust off and crafted an exquisite gem as good as his 20th Century output. Highly Recommended. 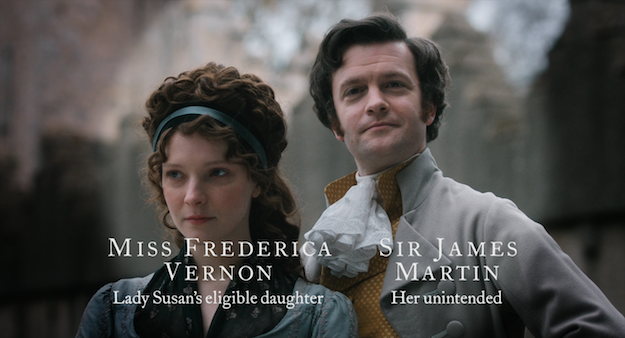