Shout Factory // PG // April 16, 2019
List Price: $29.99 [Buy now and save at Amazon]
Review by Adam Tyner | posted March 26, 2019 | E-mail the Author
In the space of just a few short days, Karen (Susan Strasberg) has watched a distended growth on the back of her neck grow to a borderline-nightmarish size. The doctors she's sought out aren't quite sure what to make of this tumorous bulge. With every passing day, it grows larger and larger still, and....hmmmm, it almost feels like whatever's inside is moving.


With a medical oddity like this, it's always helpful to get a second opinion. The diagnosis...? Wait for it. Wait for it! 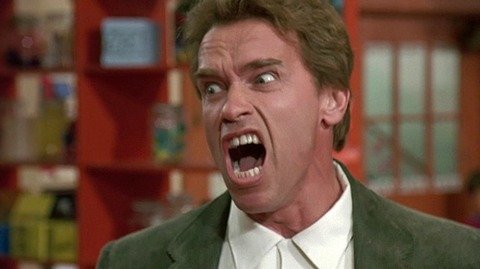 No, indeed, it is not a tumor. It's four hundred year old medicine man Misquamacus! Sure, right now, he may be a wee little fetus attached to Karen's neck, but before you can say "pana witchy salatoo" – and believe me, you will, a lot – he'll emerge a full-grown man with mystical powers the likes of which we cannot begin to conceive. The most mighty efforts of famed oncologist Dr. Jack Hughes (Jon Cedar) to remove...whatever this is are repeatedly thwarted, whether it's a surgeon slicing his own wrists with a scalpel or a surgical laser gone amuck.


"Yeah, but a wooden Indian with magical powers...?"

Where science has failed, perhaps magic will prevail! Thankfully, Karen has in her corner two doggedly determined men who know their way around mysticism. There's her maybe-not-her-ex-anymore Harry Erskine (Tony Curtis), a Tarot card reader who's quick to use his sarcastic-finger-quotes-talents to grift sweet old ladies. He in turn convinces John Singing Rock (Michael Ansara), one of the last surviving medicine men, to risk his life to face the soon-to-be-reborn Misquamacus in battle. Which...yeah. Easier said than done.


Look, no one's going to mistake The Manitou as some sort of unheralded classic. It's forty minutes too long. We're talking about a horror movie devoid of anything resembling a scare, and there's really only one successful jolt* – the bit with the scalpel, for anyone keeping track at home – which even then is twenty minutes in. Interminably long stretches of nothing in particular await. Oh, but every so often, you're treated to something off the wall like this:


...and it's all worth it. I mean, around the ten minute mark, you get Tony Curtis with a fake moustache and a wizard robe grifting a grand old dame, then he strips down and unleashes some disco moves on his way to pouring his brewski into a wine glass.


You've got another one of Harry's marks chanting "pana witchy salatoo" as she floats down the hallway of his apartment building, taking a violent tumble down the stairs as Harry darts down the hall in slow motion. There's a carnivorous lizard demon:


Thrill to a séance with Old Chief Wood'nhead's noggin slowly emerging from a dining room table. An exploding typewriter. Alka-Seltzer that plop-plops but doesn't fizz-fizz. Something close enough to a zombie. And, I dunno, a leg-less Misquamacus doing whatever this is:


...culminating in a Star Child mindfuck with bared breasts, laserblasts, and meteor assaults or something. The Manitou transcends our mortal notions of a good movie or schlock. It's...well, I don't know what the hell it is, but I'm still appreciative that Scream Factory has seen fit to bring The Manitou to Blu-ray. I'm not quite sure I'll ever be the same after this, but still, Recommended.


Video As the original camera negative for The Manitou has long since been lost, Studio Canal scanned the only remaining element – an interpositive – for this new remaster. The disclaimer before the film notes that it's a 4K scan; the flipside of the case says it's 2K. In any event, while the scope image does look quite lovely at times:


...it more often is soft and hazy, occasionally to excess:


I don't doubt that definition and detail are as robust as they could be, given the surviving elements and presumed stylistic intentions. Its inescapably '70s palette looks respectable enough, and the AVC encode ably shoulders all that coarse film grain. Though there is a fair amount of speckling and the like, it's never really to the point of distraction. While The Manitou isn't exactly the sort of disc you'd grab to show off your ritzy home theater, I'm still pleased with what Studio Canal and Scream Factory have assembled. So long as you go in with the right expectations, I don't think you'll walk away disappointed either.

The Manitou has been reborn on a dual-layer Blu-ray disc at its theatrical aspect ratio of 2.35:1.


Audio The Manitou's original stereo audio has been newly restored for this release, and both it and the accompanying monaural track are presented in 24-bit DTS-HD Master Audio. If you'd like to get a taste of what each sounds like, I've recorded a quick comparison:


While the restored audio doesn't belie the film's age or anything, I'm again not left with any real complaints. Frequency response is expectedly limited, and a couple of brief moments in a hospital stairwell are clumsily recorded, but that's nothing all that unusual and certainly nothing specific to this Blu-ray release. The audio is free of any dropouts, clicks, pops, or intrusive background noise. I spotted murmurs on another forum about excessive warbling that supposedly rendered the audio unlistenable, and...nope, no idea what that was about. Well-done, at least to my ears.


Also included are an audio commentary and a set of English (SDH) subtitles.

There's no slipcover or newly-commissioned artwork this time around. The cover is reversible, though, and – oh boy! – nudity.


The Final Word "Guard well the pips, and the fruit shall grow without let." Y'know, Harry's mystic motto kinda tracks! Because the pips are the surviving film elements of The Manitou, and the fruit is...this Blu-ray release? That's the explanation I'm going with, anyway.


All those well-guarded pips and un-let fruit growth have paid off, as Scream Factory has resurrected The Manitou once more with a terrific selection of extras and as strong a presentation as could be hoped for. I mean, yeah, it's a challenging movie to recommend sight-unseen as it chaotically swings between unhinged what-the-fuck-am-I-even-watching-right-now and extended tedium. But...whew, if you have a taste for the offbeat, The Manitou's most surreally inspired moments prove to be well-worth the occasional slog to get there. Recommended.