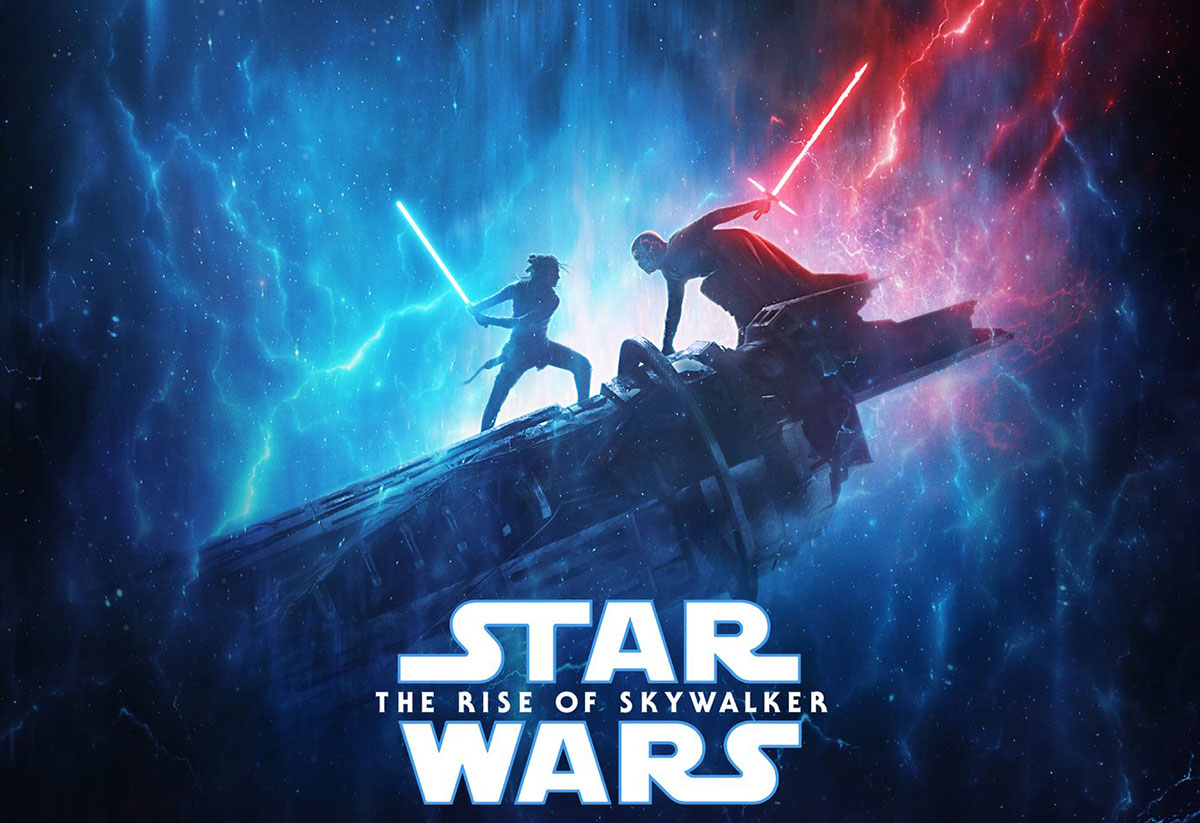 Director J.J. Abrams no doubt knew that returning to the franchise to helm this final installment of the Star Wars sequel trilogy would open him up to much criticism, no matter how well he stuck the landing. I will be the first to tell you I am not a franchise fanboy; I like the films and have fond memories of being introduced to the original trilogy as a child, but I do not know the lore inside and out as some fans do. Star Wars: The Rise of Skywalker is now upon us, and Abrams has ultimately crafted an OK conclusion to this story that better serves as a sequel to his Star Wars: The Force Awakens than a follow-up to Star Wars: The Last Jedi, which is the previous film in this storyline. There is plenty of fan-baiting going on, and lots of big finishes for popular characters. The film also moves at such a breakneck pace that it is easy to overlook its flaws until after the credits roll. The Rise of Skywalker entertains as a big-budget, sci-fi epic, but it lacks the soul of better Star Wars films.

The Rise of Skywalker picks up in the days following the events of The Last Jedi; well, sort of, since this film works hard to erase a couple of controversial plot devices from that film, often to the detriment of this story. I was lukewarm on The Last Jedi when I saw it in theaters; I liked it a lot more at home, awarding it 3.5 stars out of 5 stars in my review; and now appreciate the film even more. I do not return to reviews to revise my scores, but I would likely give that film at least four stars if reviewing it today. Abrams stepped away from the franchise after The Force Awakens and gave the reins to Rian Johnson, who actually did a damn good job building franchise mythology in The Last Jedi. Johnson had the passion and vision to take the series to new places, even if it meant adopting a darker tone and trashing some of Abrams' original narrative ideas. Where does The Rise of Skywalker pick up (now that I have digressed)? Spoilers ahead! Emperor Palpatine (Ian McDiarmid) is alive and vows revenge on the Resistance, so Rey (Daisey Ridley), Finn (John Boyega) and Poe (Oscar Isaac) attempt to locate and kill him, as Rey also prepares for a definitive confrontation with Kylo Ren (Adam Driver).

Supreme Leader Snoke (voiced by Andy Serkis) is one of the most interesting characters in this trilogy, at least until now. One of my least favorite decisions Abrams makes here is the early revelation from Palpatine that he created Snoke as a puppet to bring Kylo Ren to the Dark Side, thus eliminating the mythology that Snoke crafted the conflict between Kylo Ren and Rey. This revelation feels like the popping of a balloon with a pin, and it kind of set the tone for the rest of the film for me. One of the best parts of The Last Jedi was the shocking twist in which Kylo Ren killed Snoke instead of Rey, hinting that he was not completely lost to the Sith. The Rise of Skywalker undercuts that scene's effectiveness with these new revelations, and Abrams seems unsure whether his budding villain is worthy or redemption or not. Among the other controversial changes Abrams makes here to rewrite cinematic history is resurrecting Luke Skywalker (Mark Hamill) as a "Force Ghost" that can lift entire space ships out of the water and crowning Rey the granddaughter of Palpatine whose parents only pretended to be "nobodies."

I was less enamored with seeing Luke Skywalker again than getting one last glimpse of General Leia Organa (Carrie Fisher). The late actress died in December 2016, and Abrams used leftover footage from previous films, as well as Fisher's daughter, Billie Lourd, to stand in as the character. This allows Leia a proper send-off, and her character departs the franchise during a pivotal meeting of Kylo Ren and Rey. I initially criticized The Last Jedi for making little forward progress on the overarching story, a decision for which I am now less critical. The Rise of Skywalker more than makes up for that, absolutely flying from scene to scene and planet to planet as it clambers toward its climax. Poor R2-D2, Rose Tico (Kelly Marie Tran) and General Hux (Domhnall Gleeson) are given little fanfare here, but C-3PO (Anthony Daniels, who has appeared in every episodic Star Wars film) is given a powerful hero moment, as he must be reset to uncover a hidden inscription imbedded in his memory. That moment works better than one where Chewbacca (Joonas Suotamo) appears to go down in a fiery spacecraft crash caused by Rey.

Remember when the Resistance was all out of fighters and even Jedis with the power of the Force appeared to be inadequate to beat down the First Order? Well, that is all thrown out the window when Lando Calrissian (Billy Dee Williams) arrives with a massive army of individual crafts during a pivotal battle. It is narrative decisions like these that made me scratch my head. Is Abrams just thumbing his nose at fanboys, or does he hate The Last Jedi that much? Not everything is bad here, honestly, and this review will largely consist of my criticisms of the film, which still provides adequate entertainment. I'm glad we get to say goodbye to Leia; and I'm glad the film reunites its heroes, Rey, Poe and Finn, who is unfortunately relegated to almost professing his affections for Rey during the majority of the film. Perhaps if Abrams had given Johnson a bit more direction on where he wanted this story to end up, the aforementioned issues might not have existed.

At the end of the day, The Rise of Skywalker does at least an adequate job of wrapping up the character arcs from this trilogy, complete with the expected confrontation with Palpatine and some redemption for Kylo Ren. Yes, there are plenty of loose ends, and the film has the bad habit of telling rather than showing for important plot points like Rey's heritage and skills. I still really like the cast here, particularly Ridley and Driver, who continues to have a blast playing Kylo Ren, even when the going gets tough. Logic gaps aside, I enjoyed the telepathic fights and conformations between Kylo Ren and Rey, even the out-of-nowhere, in-person assault on Pasaana that leads to Rey getting a lesson in temperance from Kylo Ren. Abrams still does a nice job with the practical sets and visual effects here, and the cinematography from Dan Mindel remains strong. The force of deeply saturated colors is strong with this one. I suspect there could be an extended version of this film somewhere; one that allows these concluding storylines to breathe a bit more. That may improve the film, and it may not. As it stands, the film's constant forward motion allows you to mostly overlook its flaws…mostly.

The 2.39:1/2160p/H.265 native 4K image with HDR10 looks fantastic, with detail and texture as abundant as the numerous characters and locales of the Star Wars Franchise. I missed this film in cinemas, but this presentation appears to beautifully replicate the in-theater experience. Grain is perfectly resolved and natural, and black levels are deep and inky, a significant improvement over those on the included Blu-ray. Fine-object detail is off the charts: Take a gander at space-ship interiors; costumes, Chewbacca's fur and intimate facial features to be impressed. Wide shots are gorgeous and deep, without a hint of compression artifacts. Visual effects are wonderfully blended with live-action elements, and CGI characters are impressively realistic. The entire image embodies that 3D, natural, crystal-clear pop viewers expect from modern 4K presentations. The image is certainly darker here than in 1080p, but contrast, skin tones and colors are more lifelike. The HDR pass gives colors a pleasing, organic boost; lightsabers are blinding, sunsets lush, and explosions startling. Overall, this is a fantastic presentation from Fox and Disney for this film.

But, of course, this Dolby Atmos mix, which I sampled in 7.1 Dolby TrueHD, is mastered at a lower volume than most. This is Disney, after all. That said, once I turned up the volume a few notches, I was satisfied by this mostly aggressive mix. Each element is balanced appropriately, and the soundtrack never becomes crowded or overwhelmed during the frenetic action sequences. Dialogue is crystal clear, whether delivered from the center channel or directionally; ambient effects like crowd and space chatter are pleasingly lifelike; and action sequences benefit from frequent sound pans. The LFE does offer reasonable support during these action sequences, but I do think the low-end response could have been slightly improved overall. A lot of the impressive sound pans make use of the entire sound field, but feel like they deserve a bit more rumble from the subwoofer. Despite this one issue, this is an overall strong mix that provides a three-dimensional experience for viewers. French and Spanish 7.1 Dolby Digital Plus mixes are included, as are English SDH, French, Spanish, Danish, Norwegian and Swedish subtitles.

This three-disc set includes the 4K disc, a Blu-ray with the movie; a Blu-ray of bonus content and a Movies Anywhere digital copy code. The discs are stacked in a black 4K case with only two hubs, and the case is wrapped in an attractive slipcover with artwork more impressive than the busy, underlying cover artwork. Disney once again labels this an "Ultimate Collector's Edition," a title that usually means little, but a number of strong bonus features do appear for The Rise of Skywalker. The most impressive is The Skywalker Legacy (2:06:11/HD), a feature-length, making-of documentary that explores both the making of this film and the franchise as a whole. Participants are abundant, and include Abrams, his principal cast, editors, effects wizards, sound mixers, dialect coaches, etc. You also get archival footage of George Lucas, Hamill, Fisher and others discussing the franchise, which is a nice treat. This is not exactly a linear documentary, but it proves a nice companion to the film. You also get Pasaana Pursuit: Creating the Speeder Chase (14:16/HD), a closer look at making the action sequence; Aliens in the Desert (5:59/HD), a spotlight on the film's desert locations; Warwick & Son (5:37/HD), a discussion with actor Warwick Davis about his character; D-O: Key to the Past (5:33/HD), about a droid character here; and Cast of Creatures (7:46/HD), covering the work of effects and puppet-masters throughout the series. There are also several digital exclusive featurettes, which I did not view, available using the included digital-copy code.

Perhaps J.J. Abrams' The Force Awakens is appreciated largely because it eased viewers' collective distaste for the Star Wars prequel trilogy by providing new content in the spirit of George Lucas' original films. If anything, this conclusion to the sequel trilogy cements my belief that side stories, like Rogue One, Solo and Disney+'s "The Mandalorian," take more dramatic chances and are generally more interesting than this three-film narrative. Abrams attempts to rewrite some of The Last Jedi's history in this busy, acceptable follow-up that moves quickly enough that viewers may not notice problems with the narrative, character arcs and mythology until after the credits roll. The film is far from perfect, but the 4K Ultra HD package offers strong picture and sound and some nice bonus content, allowing me to Recommend it.