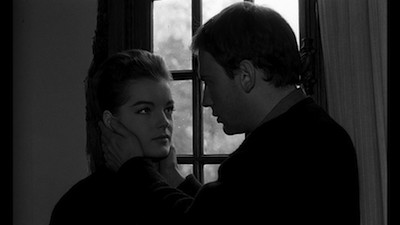 Though Alain Cavalier came up around the same time as many other young French filmmakers of his day, he never earned the name for himself that the more boldly experimental directors of the Nouvelle Vague garnered. Cavalier began as an assistant director for Louis Malle on many of his earlier films, and Malle returned the favor by being a sort of supervising director on Cavalier's debut feature, 1962's Le combat dans l'île (a.k.a. Fire and Ice). Yet, the pupil hadn't really caught up with the teacher.

Le combat dans l'île is a reactionary picture. It was made amidst the political turmoil that was erupting in France in the early 1960s at the end of the Algerian occupation. Cavalier's story is one of a young man duped into some dirty fighting for conservative extremists. Clément (Jean-Louis Trintignant, Z) is the angry young son of a wealthy industrialist, and the family business is under assault by unions. This may be part of the reason that Clément joins the right-wing cause, he's taking action to get back at his father for failing to retaliate against the liberals. Clément is part of a cabal of twelve who plan to use terrorism to keep France from caving to the commies or sacrificing its imperialist power.

Clément governs his personal life with the same fiery temper as he does his political life. His wife Anne (Romy Schneider, What's New Pussycat?) is a former actress who likes to have a good time, and her alleged flirtations incite Clément's wrath. They split at the start of the picture, but she returns the night Clément is to assassinate a politician (Maurice Garrel) on the other side of the fence. The mission fails, and Clément and Anne must go on the lam. They hide out at the country home of Clément's childhood friend Paul (Henri Serre, Jules et Jim), and when Clément decides to leave Anne there to pursue revenge against an ally who betrayed him, her affection shifts to Paul. These men are the fire and ice of the title: Clément runs hot, Paul runs cool. The latter advocates peace and change whereas the former is all about violent rigidity.

Le combat dans l'île was written by Cavalier, with dialogue by Jean-Paul Rappeneau (The Horsemen on the Roof). It was shot by cinematographer Pierre Lhomme (Army of Shadows), and the black-and-white photography coolly balances the light and dark aspects of the narrative. The classic color scheme of hero and villain is subverted in that Clément is more fair, and he dresses in a bright trench coat, while Paul has dark hair and wears dark clothes. Both have a quiet stoicism that is typical of French leading men, but the actors work it to different effects. Trintignant uses silence and carefully parsed words to create an air of danger, whereas Serre's use of Paul's soft-spoken acceptance gives Anne a safe place to retreat . Romy Schneider is lovely, and she brings abandon and passion to the role, which she then softly massages into domestic bliss with Paul.

While his contemporaries were experimenting with cinema verité , Cavalier took a much more traditional approach to Le combat dans l'île. Outside of some choppy editing, the movie sticks to the rules of classic narrative. Actions have future consequences, and each scene logically rolls into the next. The political backdrop is just that, an exotic locale against which a rather conventional love triangle can take shape. By the end of the film, Clément has entirely abandoned his ideals, instead pushing for a showdown straight out of a western or a crime movie--though like most of the rest of the movie, this duel is too neatly arranged to inspire fear or get the blood boiling. The pieces all fit together nicely in Le combat dans l'île, and everyone has constructed their portion of the puzzle with the utmost of craft, but the image that Cavalier leaves us with isn't all that memorable. It's a neither/nor kind of movie--neither truly classic nor boldly modern. It's a journeyman's movie made by a neophyte: good storytelling, but not much of a story. In cinematic history, Cavalier was whispering while all those around him were shouting.

Le combat dans l'île never had a proper release in North America, and this DVD comes on the heels of a recent revival. Some are heralding it as a lost treasure, which leans toward hyperbole. I'd say Le combat dans l'île is more of an attractive curio. If 1960s French cinema is your thing, the movie should be right up your alley, but it's not going to knock any of its peers off the shelf any time soon.

Video:
The DVD release of Le combat dans l'île preserves the film's original aspect ratio of 1.66:1. The image quality of this restoration, supervised by Pierre Lhomme, is nothing short of fantastic. The picture is free of any dirt, scratches, or grime, the contrast between the dark and the light looks wonderful, and the overall resolution is pristine.

Sound:
The original French soundtrack is mixed in mono and sounds very good. There is no hiss or volume problems, and all the dialogue rings through with clarity. Optional English subtitles show up on the screen in white and are easy to read. 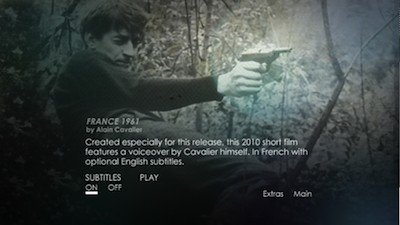 There are two extras on the disc itself. One is a photo gallery from the production, including images from Louis Malle's archives. The other is a new short film Alain Cavalier made to reflect back on the making of Le combat dans l'île. "France 1961" is just over 13 minutes long and is basically Cavalier filming photos from the production and the time around the making of the movie and talking through the memories inspired by what he sees. The information is good--it's like a mini commentary--but it doesn't seem particularly well planned since some of the photos are hard to see due to the glare of overhead light. It ends with Cavalier panning over to a wall decorated with some of his more contemporary inspiration.

The "French Cinema Trailers" section features previews for Regular Lovers and Irma Vep, both available from the same company that put out this disc.

FINAL THOUGHTS:
This interesting archeological find takes viewers back to one of the more exciting times in cinema history and shows us one of the more quiet digressions of the French New Wave. Alain Cavalier's 1962 political melodrama Le combat dans l'île expertly crafts a love triangle between an extremist (Jean-Louis Trintignant), his sensual wife (Romy Schneider), and their more even-handed friend (Henri Serre). Neither the script nor the cinematic style broke any real ground, nor was Cavalier adequately adept at the classic storytelling he emulated to make Le combat dans l'île an absolute must-see, but it still deserves a screening or two for cinephiles who have a passion for the period. Recommended. 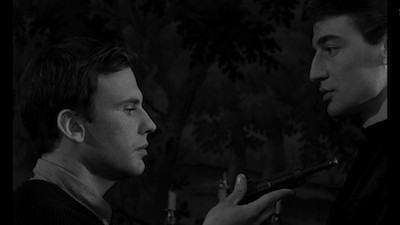