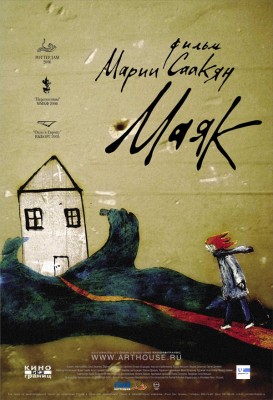 What to say of a film that, on the surface, seems like something I would love, yet is somehow less than the sum of its lyrical, free-associative parts? Such is the case with Maria Saakyan's The Lighthouse (Mayak), and "on the surface" is probably the key phrase. Though it is an impassioned and, most of all, beautiful film, it takes on a more profound subject--the loss of home, normalcy, and people's history that results when war encompasses a community--than its superficial visual strategies alone are up to, and it lacks the depth, substance, and focus it needs to make the kind of impression it clearly means to.

The Lighthouse's story concerns a young woman named Lena (Anna Kapaleva), who returns from Moscow to her home village somewhere in one of the heavily disputed, sometimes anarchic, frequently war-torn former Soviet Republics. This (unnamed) village has, indeed, been ravaged by the warring ethnic factions trying, since the collapse of the Soviet Union, to claim the region in which it's located. The reason for Lena's return is never specified, but we can guess that it has a great deal to do with the village meaning home and family, as we witness her happily seek out her family and friends, move in with her aunt, and vacillate between settling in to life back home and (when the bombs, helicopters, gunfire, and unreliable electricity remind her that home is a war zone) the desire to flee back to the safety of Moscow, perhaps taking her constantly endangered family with her. However, getting out (which most of the town seems to try off and on to do) proves exceedingly difficult, as there is no fuel for the cars and the trains are in the same shape as the area's electricity. The community, seemingly having no real, personal investment in either of the sides or military contingents that are destroying its infrastructure with their daily engagements, tries to go on as best it can, eking out some semblance of normalcy in the shadow of unpredictable but omnipresent fear and violence. Images of flocks of birds are a strong, recurrent visual motif; the film opens and closes with Lena reciting a poem to herself about birds, their freedom, and the fact that their home is always transient, and we are not sure whether Lena--who is flying back "home" but is perhaps destined to flee elsewhere, along with the rest of her flock--identifies with the birds or is envious of them, or both. 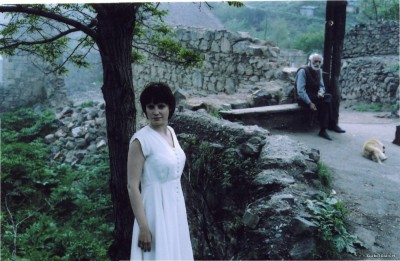 Perhaps The Lighthouse loses its way by mistaking the merely vague for the profoundly universal. What dilutes it, however, is not its intentional lack of historical or geographical specificity; though we might make an accurate guess in pinning down the time to the early 1990s and the place to the former Soviet Republic of Armenia (where director Saakyan is from, and where such events as those in the film occurred in the '90s), such a circumstance--and, more importantly, its devastating human cost--is unfortunately common enough that it is appropriate to withhold the specifics in aid of implicating us further and denying us the ease of consigning such horrible scenarios to some other place and time. Saakyan knows better than anyone that this could happen anywhere--that it has happened, and continues to happen, all the time, all over the world. This strategy actually does work for the film, bringing us closer to the everyday, basic concerns of people whom we cannot label as this or that ethnicity, nationality, or religion, but only as human.

The counterproductive (for the film's purposes) vagueness actually comes from Saakyan's execution--the images, the montage, and the music, all of which work against the film's affecting us in the way it is clearly meant to. The noticeably saturated/desaturated approach that Saakyan and cinematographer Maksim Drozdov adopt makes for some eye-catching images, but they call too much attention to themselves and their unusual qualities (especially when they are inexplicably intercut with documentary footage, which also diminishes the aforementioned, effective non-specificity). And Saakyan goes in for editing that is more elaborate than it needs to be. For one thing, there is too much of it, so we often cut away from a shot before it seems to have completely unfolded or achieved its full effect. For another, the portentous, slow-fade-out/cut-in to the next scene loses its power through overuse; this technique seems to be brought in randomly, another self-consciously "interesting" technical device that calls more attention to how arbitrarily it is deployed than to what is going on in the film. Finally, and worst, there is the music. Whether we're talking about Crash, Hotel Rwanda, or this, I find it clichéd to use pseudo-"traditional," wailing-vocals-and-strings music swelling up louder and louder over a wrenching scene for the purpose of trumping up its drama and significance; this is a convention so typical, so cheesy, that it can bog practically anything we are seeing onscreen right down into mediocrity and banality. 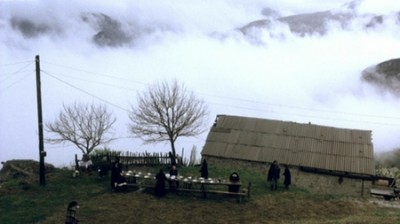 All this means that the The Lighthouse overall has a slick, self-conscious style that, when brought to fun, light confections like Amélie, can resonate in all the right ways. But it is woefully wrong for something like The Lighthouse, with all its higher aspirations to profundity. It wants to move us, but it frustratingly settles for trying to impress us by wearing its film-school know-how on its sleeve, thwarting its purpose with overeager stylistic maneuvering.


The anamorphic transfer on the feature (the short included as an extra, Farewell, is presented non-anamorphically), at the original aspect ratio of 1.78:1, is quite good; the film's high-contrast aesthetic comes through very well. There is some occasional interlacing, edge enhancement, and flicker/grain to the image throughout that suggests a less than entirely thorough restoration. Still, the visual quality overall is good, and what flaws there are are no deal-breaking distraction.


The restored stereo soundtrack is excellent; the sound is well-balanced and clear at every level, letting every aural dimension of the film assume its intended, sometimes too prominent place (see review) in the viewing experience.


A 2003 short film by Saakyan, Farewell, explores a young girl's vague, half-conjectured memory of her father, a talented artist who was troubled all his life and who has, finally, passed away. Farewell offers a good preview of the aesthetic that dominates The Lighthouse, with an almost obsessive experimentation with saturation levels and a penchant for editing that announces itself and is meant to lend a significance it cannot always achieve. But it a more successful work than The Lighthouse, perhaps because Saakyan's sharp eye for the striking image, combined with her relatively desultory interest in making her images add up to something is better suited to the abstractness of the short form, at least as it is conceived here--as a dreamy, surreal flow of images.


In showing us a war-torn world where most inhabitants just want to go about their daily lives and find some way of being comfortably at home with those closest to them, The Lighthouse is doing something very interesting and important, but it does not quite pan out, and the blame for that has to be laid at director Maria Saakyan's over-aestheticizing of the experience. She certainly knows an arresting object or landscape when she sees one; but, unlike her self-professed influence Andrei Tarkovsky, she does not have the patience or overall conceptual focus and control to make those images come to anything other than the beautiful and evocative, and beauty and evocation do not seem quite adequate for the kind of exploration The Lighthouse undertakes. In this context, they seem to drain a significant amount of power from what we are being shown, with Saakyan's sensibility (which accommodates a conventionally overused and overdramatic musical score) obtruding itself between us and any emotional response we might have to the astutely chosen and well-composed images on display. She almost seems to distrust what she has shot, requiring fancy editing, color manipulations, and a restless camera to distract us from what she really means to show us, which ultimately undermines anything greater or more meaningful the film could have been.

Nevertheless, The Lighthouse is worth a look just to take in what are, despite everything, some inspired, gorgeous cinematic moments. One has the impression that the further Saakyan moves away from telling a "story," exploring deep philosophical themes, or otherwise burdening herself with the obligation to create meaning out of her imagery, the freer she will be to pursue her most evident talent, which is more for the purely visual and which be better applied to a more experimental or non-narrative mode. Rent It.