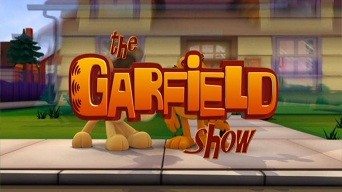 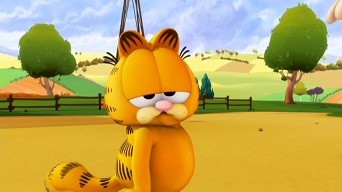 Note: A year ago, I reviewed a single-disc collection of six episodes of The Garfield Show for DVD Talk entitled Odie-Oh. Vivendi Entertainment, since that time, has periodically released similar one-DVD packages of thematically-linked installments of this CG-animated take on the infamous fat cat from the newspaper comics section, with Dinosaurs & Other Animal Adventures being the latest in the line. Contextual portions of my last review are going to get carried over here. Why reinvent the wheel? 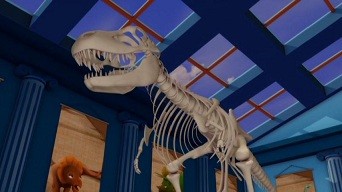 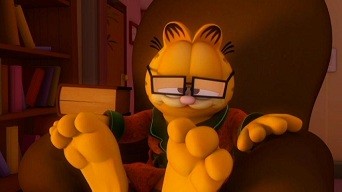 The Garfield Show appears to be the latest incarnation spinoff of this legendary character. It's a breezy, CG-animated production whose episodes run a kids-attention-span-friendly 12 minutes each. The premise of the show heavily reflects the universe established in the long-running comic strip, and in this sense it should please though not necessarily inspire long-time fans. Garfield is as sarcastic as ever, self-absorbed and lazily spending his days in owner Jon's house. Odie, Jon's dog, lives a blissfully dumb existence - and Jon is still awkwardly geeky. Garfield's comments and pranks provide the main thrust of the storylines here, and while they're mainly humorous, they sometimes flirt on the mean-spirited.

This particular volume of The Garfield Show is a bit disingenuous: Its title and packaging emphasize dinosaurs (and what little kid doesn't like dinosaurs?); however, only one of the six episodes contained within deal with dinosaurs. "Bone Diggers" has Odie digging up brontosaurus bones in the backyard, a discovery that draws the attention of an aggressive natural history museum that wants to obliterate Jon's home in the name of science to complete the fossil. Truthfully, there are no dinosaurs at all - just fossils.

The other five shorts encompass the Other Animal Adventures of this DVD's subtitle. "Down on the Farm" has Garfield trying to convince Doc Boy's animals to get cable TV; "The Pet Show" sees Odie in a competitive pet show; "Underwater World" plunges Garfield and Odie to the watery depths during a fishing trip with Jon; "Fish to Fry" centers on Garfield's appetite when Liz leaves her pet fish with Jon; and arguably the best of the bunch, "History of Dogs" features Garfield narrating, as the title suggests, a history of dogs.

Many of the strip's supporting characters make appearances - though they're wisely not jimmied into every episode. As suggested in the previous paragraph, this includes Doc Boy, Nermal, and Liz, Garfield's vet and Jon's love interest. The humor is juvenile and clearly aimed at little kids, like previous Garfield media projects - though there are occasional nods to the adults. One of my favorite gags in this collection, for instance, occurs in the episode "The Pet Show" as Odie runs in an obstacle course - with the k-k-k-k-k sound effect from The Six Million Dollar Man. Kids would find Odie's antics amusing, but it's only us old folks who would get the allusion.

Collectively, this single-disc collection of The Garfield Show sports the six 12-minute episodes listed above for a total runtime of only 72 minutes. It'd be nice if Vivendi would just release a full series collection of the show for its fans - but I guess this distribution strategy provides more revenue for them. The Garfield Show isn't some great work of art, but it efficiently delivers cartoon animal fun that little kids would probably enjoy. The animation is a tad rudimentary and clunky at times, but it's good enough to pass muster for cartoon fare of this type. As such, I'd recommend the show. However, unless you need the discs right away, I'd suggest holding off to see if a "complete series" collection materializes down the road. So, I'll go with a "Rent It" recommendation for this volume. 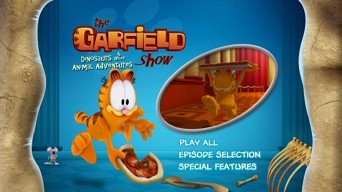 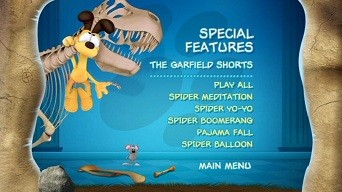 The sole extra is a series of brief minute-long cartoons called The Garfield Shorts. Think of them as animated versions of weekday newspaper comic strips. The titles are "Spider Meditation," "Spider Yo-Yo," "Spider Boomerang," "Pajama Fall," and "Spider Balloon."

The Garfield Show: Dinosaurs & Other Animal Adventures provides six breezy 12-minute episodes of the latest CG-animated incarnation of this popular newspaper comic strip fat cat. The emphasis here is on the "other animal adventures," as only one of the six shows deals with dinosaurs. While this cartoon is hardly exemplary children's programming, it provides enough talking animal antics to keep kids entertained. However, fans of the series may want to wait to see if a "complete series" DVD collection materializes after these individual DVDs have been released. The show itself is recommended, but this 72-minute DVD with sparse extras gets a "Rent It" suggestion.