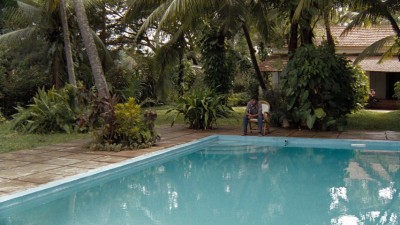 American filmmaker Chris Smith has a name almost exclusively associated with documentaries -- 1999's American Movie being his beset-known and most successful, the terrifying, doomsaying Collapse (2009) his most recent -- so his 2007 film The Pool is a double anomaly and risk. For one thing, it's Smith's first, and so far sole, foray into bona-fide narrative fictional filmmaking (his 1996 debut, American Job, was a hybrid in which the "actors" were regular folks playing themselves in re-enactments from their own lives), and documentarians have not automatically proven to be natural-born dramatic (or comedic) directors, as Michael Moore, whom nobody has ever introduced as the auteur behind Canadian Bacon, could certainly attest. Secondly, Smith made the film in India with local, Hini-speaking non-actors in the lead parts, despite its story of a poor boy spying on and envying the lives of the better-off having originally been set, by scenarist and Smith's co-writer, Randy Russell, in Iowa -- a transposition between cultures, societies, and languages that might've struck less brave and adventurous filmmakers as too fraught with potential logistical and cultural problems to consider viable. But the film that resulted, though not perfect, is a more honorable, and mostly quite successful, experiment in cross-cultural cinematic storytelling than one might have feared. Working from the inside out, Smith and company have made a movie that only rarely feels like an act of tourism, and for the most part reveals a way of life and a set of circumstances genuinely foreign to most of its behind-the-camera participants with an admirable degree of insight and respect. 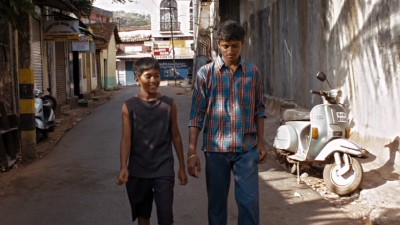 Smith's main resource, what really carries and saves the film, is his casting the main roles with local non-professionals actually acquainted with hard-laboring, poverty-level survival on the streets of Panjim (the Southeast Indian coastal city in whose teeming slums and luxuriant outlying hills Smith has set and shot the story), playing "characters" with their same names -- Venkatesh, an 18-year-old boy from true rural poverty who's left his mother and sister and come to the city out of economic necessity, and the effectively orphaned little boy Jhanir Bhadshah that Venkatesh has taken under his wing; the enterprising two sell plastic bags to shoppers on the streets together after they've completed their days' work, Jhanir as an all-purpose kitchen boy at a restaurant, Venkatesh as a housekeeper for a hotel. Venkatesh and Jhanir go about their endless, low-level work with good humor, teaching each other and enjoying together what little leisure time they can find, but Venkatesh's eye is diverted by one of the fancy, walled-and-gated residences he and Jhanir pass in their wanderings through the well-off hills surrounding the city. This apparently unoccupied palace has an in-ground outdoor swimming pool, and he's gotten into the habit of climbing a tree just outside to longingly survey the pool, garden, and house, fantasizing the life of ease and freedom they must represent. When Jhanir tells Venkatesh to just sneak in and take a dip if he's so impressed, Venkatesh says no, he plans to one day earn his way into the pool. 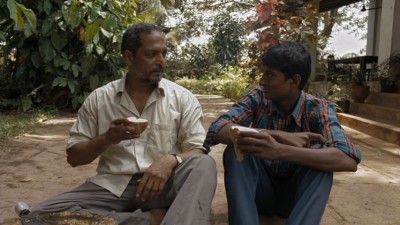 He gets his chance when the house's residents -- a middle-aged man from Bombay (well-known Bollywood screen star Nana Patekar) and his petulant teenage daughter, Ayesha (Ayesha Mohan) arrive to what Venkatesh disbelievingly learns is merely their vacation home, bringing their inexplicable bourgeois-familial dramas and intergenerational enmities with them. As Venkatesh slowly and honestly insinuates himself into their lives, offering his services as a gardener (a skill he spontaneously but handily teaches himself when he sees the need exists) to the gruff but tenderhearted man and gradually befriending the adolescent-angst-filled but kind and genuine Ayesha, a contrast of cultures and classes plays out, with a surprising calm and good nature that nonetheless faces down the real divisions between the lives of Venkatesh and Jhanir and Ayesha's and her dad's gated, fraught existence. By any standard Venkatesh has ever known, Ayesha is spoiled and useless, though he (and we) can see that's not entirely true, whereas Venkatesh's arranged future marriage to a village girl selected by his mother and currently 10 years old -- precluding any serious thought of romance between him and Ayesha -- is something he can't quite satisfactorily explain to the upper-middle-class, educated big-city girl, though he deeply and sincerely believes in the tradition to which he's bound, and she accepts it without overt criticism. It's actually the opportunity Venkatesh thought he wanted, rather than the macrocosmic culture clash of his presence inside the walls of Ayesha's house, that's the catalyst for the real conflict in his life and the film's ultimate dramatic tension: When he's offered a life with Ayesha and her father in Bombay and a chance for a materially better life -- after he's been exposed to the comparatively frayed, cold familial connections and strange complications that seem to come with such a life, and now acutely aware that it would mean leaving his countryside home and family even farther behind than tough-appearing but dependent Jhanir -- he realizes the paradise that that swimming pool seemed to represent has become a proposition whose real meaning for him is one of sacrifice and ambivalence. 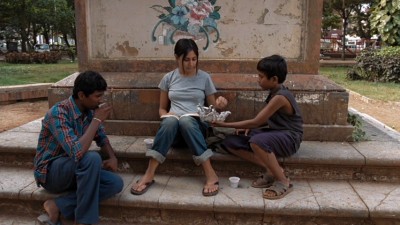 This is all handled by Smith with, for the most part, the highest subtlety and delicacy: Each character emerges as a human being, never a caricature derived from their class or conditions, through the relaxed, naturalistic style shared by and joining together the performances and the filmmaking, an updated Neorealism well served by Smith's documentary experience; the director did the main camerawork himself, for a handheld intimacy that never overdoes the shakiness or strives too hard for "rawness," striking a visually pleasing balance between compositional symmetry and spontaneous, immediate dynamism that takes in both the utilitarian reality of Venkatesh's life and environment(s) and their potential visual interest, particular character, and beauty (a gentle reminder that the postwar Neorealist style, while "gritty" for the time, was rarely so haphazard or hard-pressed as to forgo visual pleasure or the conventions of cinematic grammar/continuity altogether). When The Pool stumbles, it's because it momentarily veers away from its commitment to simply observe and respect its people and their lives (it pulls off very well the rare feat of actually depicting and honoring the real, hard work being done by its principal characters, without a trace of pity, trivialization, or sentimentalization), which would've more than sufficed for an excellent movie, to lean too hard on unnecessary story convolutions: It would seem that a mid-film subplot involving Venkatesh inadvertently getting a coworker fired is meant to add a shade or two of gray to him, thereby avoiding the patronizing characterization as some sort of unlikely poverty-class saint that his final, selfless compromise does run the risk of imposing; the obvious solution would've been to avoid either somewhat contrived-feeling extreme and leave the film lower-key but more authentic and whole. Still, those momentary disruptions aren't blunt or overdone enough to break The Pool's overall spell, and it works quite well in the end as a genuinely, convincingly humanistic film, one whose wisely-chosen aura of observant, sensitive modesty and sincerity allows it to juggle with grace -- fully acknowledging without presuming to pretend to solve -- the class inequities, familial connections weakened by the modernization and personal advancement, and interpersonal barriers of economics and social circumstances that bring its characters into each other's orbit but threaten to leave them adjacent but disconnected, lonely planets after all. 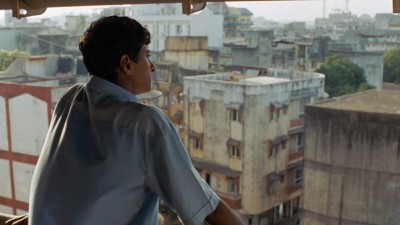 
The transfer, which presents the film at an anamorphic-widescreen aspect ratio of 1.78:1 (slightly modified from its theatrical AR of 1.85:1), is nicely done; all of the colors, contrasts, and observantly captured light and texture of the teeming city of Panjim and its more natural-beauty-laden environs present in Smith's and Parvez Pathan's immediate, loose, but never "raw" cinematography shine through vividly and in detail, with solid darks and the variegated richness of brighter scenes well intact, with no aliasing and only occasionally noticeable edge enhancement/haloing, and a respectably cautious use of digital noise reduction (DNR) that leaves a healthy amount of the film's natural, celluloid-like texture and grain intact.


The film's Dolby Digital 5.1 surround track, in Hindi with non-optional English subtitles (with an alternate Dolby Digital 2.0 stereo option), is unfailingly clear, crisp, and rich, rendering the film's surprisingly sophisticated (for a location-shot, small-budget movie) sound mix faithfully in all its rich detail, with all the sharp highs and deeper lows of Didier Leplae's and Joe Wong's score integrated into an overall fidelity and resonance, free of any imbalance or distortion, that makes everything from the noises of the city to the ambient quiet of a garden or forest to all incidental sound and dialogue immediately present and sonorous.


--The Making ofThe Pool, a 55-minute documentary directed by Chris James Thompson that offers an expansive and in-depth view -- through interviews with director Chris Smith, his producers, and his cast of nonprofessional young actors as well as an ongoing, all-access and candid behind-the-scenes video diary of the shoot -- of what emerges as a skin-of-the-teeth, head-first movie project as impressive for its conceptual and logistical audacity as for the streamlined, humane neo-Neorealist narrative and aesthetic simplicity it attains.

--About 15 minutes' worth of deleted scenes, mostly interval events and further slices of Venkatesh's life that were apparently trimmed in the interest of hewing slightly closer to the narrative thread and advancing it a bit more quickly.

--The film's theatrical trailer, along with several other previews for Kino-Lorber DVD releases. 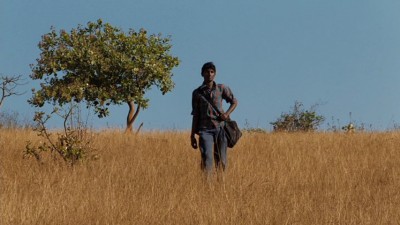 Deceptively sweet, small-scale, and simple, Chris Smith's The Pool is a film about our globalized, accelerated, increasingly unequal world that finds its apt approach -- a quasi-documentary, actually quite beautiful and deliberately constructed style at one with post-war Italian Neorealism -- in the past and captivatingly proves the continued relevance and durability of that style. The film is centered around the hardscrabble life of a young Indian man, Venkatesh (Venkatesh Chavan, like most of the cast a carefully chosen nonprofessional basically playing a version of himself) whose very poor, always-laboring subsistence in the crowded Indian city of Panjim is actually a step up from the truly survival-level life of his rural origins. But this is a character whose happy-go-lucky view of his life -- an affable mix of optimism and fatalism -- is an attitude shared, at least in part, by the film itself; the most harrowing parts of Venkatesh's present and past experiences are left to our imagination, and the clash between India's different cultures and classes -- represented by the swimming pool, initially inaccessible to Venkatesh, of the title -- that come to bear on his evolving situation is a quiet conflict that, rather than manifesting as an outward or explicit struggle, tears Venkatesh inwardly between his roots, friends, and family and the promise of a better-off life that would sever him from his roots. That could've been much more problematic than it is, but Smith and his co-writer Randy Russell honor, for the most part, Venkatesh's complicated reality, only rarely going off track or missing the point, and their use of a candid shooting style that at once captures the squalor and the beauty surrounding Venkatesh, as well as Smith's perfect casting of non-actors in the principal parts, lends the film a rich, appealing intimacy. For an American filmmaker to visit India and make a fictional movie about a poor young man could've resulted in a terrible, insulting fiasco of a movie, but The Pool, though simple-fable-like, is mostly mercifully free of any fumbling, simplistic outsiders' presumptions, projections, or escapism. As views from outside go, it's not quite Phantom India (French filmmaker Louis Malle's agonized, extremely far-ranging and in-depth, six-hour documentary series on the country), but when it works, as it does for the most part, it makes for quite a nice, conscientious, respectful antidote to Eat Pray Love. Recommended.