It seems like exquisite timing to see athletes like soccer's Robbie Rogers and basketball's Jason Collins are currently breaking down barriers for homosexual athletes in professional sport, considering the cinematic release of 42, detailing Jackie Robinson's struggles to be the first African-American player in baseball. With any luck, there will be a dramatic retelling of Rogers'/Collins' experience in dealing with locker room reluctance from teammates much in the same way Robinson's story has through the years, but how does 42 stack up against some of those?

Written and directed by Brian Helgeland (The Order), the film focuses on the period from the time Dodgers owner Branch Rickey (played in the film by Harrison Ford, Cowboys & Aliens) identified Robinson (Chadwick Boseman, The Express) as a candidate to play for the Dodgers to Robinson's rookie year, about a year and a half in total. Notable events that occur during this period aside from Robinson's debut include his marriage to his wife Rachel (Nicole Beharie, Shame), some of the feelings he experienced in the locker room from guys like Pee Wee Reese (Lucas Black, Jarhead) and Ralph Branca (Hamish Linklater, The New Adventures of Old Christine), and rough experiences with teams he played against. The ‘signature' experience may very easily be when he played the Philadelphia Phillies, and their manager Ben Chapman hurled epithet after epithet at Robinson from just outside the dugout. Chapman is played by the normally comedic Alan Tudyk (Wreck-It Ralph) and man, the vitriol that is dialed upon to make the sequence so palpably tense is something. The supporting actors do get a moment or two to shine in various ways and Tudyk certainly makes Chapman memorable for his hatred. 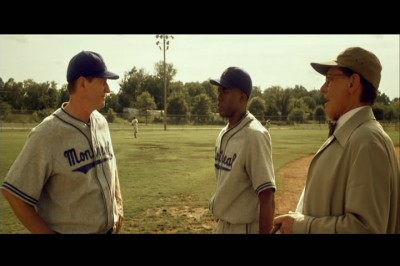 Making a movie whose protagonist has been examined in dozens of different ways like Jackie Robinson is admittedly a difficult task because there is very little new ground to mine. For me, I think my encompassing emotional Jackie Robinson cinematic experience was a mid-‘90s HBO film titled Soul of the Game, which spent a large portion of time on Robinson's playing days in the Negro Leagues and the resistance he may have had to signing a contract with the Dodgers. 42 tends to hit some of the same emotional notes, from the animosity on field to the scorn off of it at hotels, right down to the young kid that learns about Robinson's impact before making his own footprint (Soul had Willie Mays, while 42 had Ed Charles).

With many of these same notes being hit, the focus for me shifted to the execution of these characters. Boseman is okay, if not unspectacular. Robinson had to weather a lot of abuse and had to turn countless other cheeks, and Boseman communicates this well, with occasional moments of venting to friends or family. When it comes to Ford though, while the bushy eyebrows and prosthetic nose initially distract, getting past that the performance is a little too Zen and disappointing. Every time I expect him to try and do something that surprises or garners a lot of praise, nothing comes back in response. On the flip side though, his work as Rickey qualifies him as the first guy to portray both Han Solo and Yoda in his career.

So the main cast does not do all that much to breathe life into older, more well-known moments. Strangely enough, on the few times when new moments are created they are actually not bad. A scene when a young white kid goes to a game with his Dad, only to witness him hurling N-bombs at Robinson, is quite good and those type of moments are fleeting in 42. Limiting themselves to such a narrow timeline does not help matters to be sure, but for most of the film, Helgeland seems to hit the viewer over the head with the outrage of Robinson's treatment, when simply letting the outrage speak for itself would have likely been more effective. 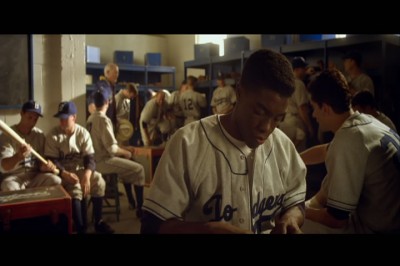 I really wanted to like 42 and there were moments that I did, but those moments did not produce the level of emotion that they deserved. This is a fault directed at the story, performances and direction, which makes the overall experience feel like a waste. Rather than make THE Jackie Robinson movie, Helgeland has made ANOTHER one, which when it comes to biopics (or heavily historically influenced ones) adds to a growing pile of disappointments.

Warner's AVC-encoded 2.40:1 high-definition presentation of 42 is quality viewing to be sure. Yeah, the stadiums and crowd shots are all computer generated and/or enhanced, but when it comes to the living, breathing subjects at hand, coarse grains of dirt in the field and fabric in the uniforms is easily discernible, and one can almost feel the sweat on the summer days that the players had to endure with those uniforms. Colors are reproduced accurately, whether it is the browns of Rickey's office or the greens of a field, and flesh tones look good without any unnatural color pushing.

The film's DTS-HD MA 5.1 lossless track also puts in some heavy lifting too. There are quite a few moments through the film which include low-end activity, but other crowd-focused scenes in the various baseball stadia, crowd noise is present and all-enveloping. Directional effects are ample too; a moment when a train whistle went off in the rear channels made me say audibly ‘what the hell was that?' Conversely, quieter moments where dialogue is more centric are clear and require little if any compensation. The disc is quite solid technically.

One would think 42 would be adorned with a ton of supplements, but that is not the case with only three quick featurettes. "Stepping Into History" (9:14) focuses mainly on the cast, their approach to the parts and Helgeland's thoughts on them. "Full Contact Baseball" (10:05) covers the more technical aspects of the sport for the actors and the attention to detail, both historic and athletic. "The Legacy of the Number 42" (9:17) looks at Robinson's stint from a real-life perspective, featuring interviews with current baseball commissioner Bud Selig and Hall of Famer Hank Aaron, and some former teammates of Robinson, all of whom sharing their thoughts on the player and the man. A standard definition copy of the film is on a second disc, along with a redeemable code for an Ultraviolet copy of the film for your consumption.

The key towards gauging an individual's appreciation of yet another retelling of a historical figure may very well lie on how much familiarity the individual has with said figure before seeing the movie. For those not familiar with it, it is an average retelling, but with little else going for it. Technically the disc is superb and flat out sucks for bonus material, so I would take this as more of a rental (and a loose history lesson) than anything else.