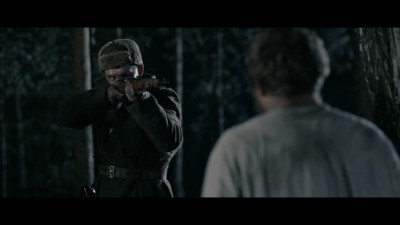 If only the world paid as much attention to Russia's frequently great cinema as we do to its imperious, jingoistic prime minister, its political/economic shadiness, or its legislated-homophobia public-relations disasters, we might have a more balanced or favorable view of our former Cold War adversary. Consider Sergei Loznitsa, the young Russian auteur who -- continuing a venerable tradition of unabashed poeticism, historical hyperawareness, and narrative innovation in Russian cinema that stretches from Eisenstein through Klimov and Shepitko to Sokurov -- a couple of years ago gave us My Joy, a dense, mournful elegy for Russia amid contemporary chaos and doubt. Loznitsa, who began his filmmaking career as a celebrated documentarian, has now cemented his standing as a maker of fictional films with In the Fog, which returns, like many fine Russian films before it (Klimov's Come and See, Shepitko's The Ascent, Tarkovsky's Ivan's Childhood), to a founding trauma of the former Soviet Union's late-twentieth-century political climate and cultural sensibility: The German invasion and occupation of their country, and the ferocious Russian resistance (viciously enforced by Stalin), during World War II. 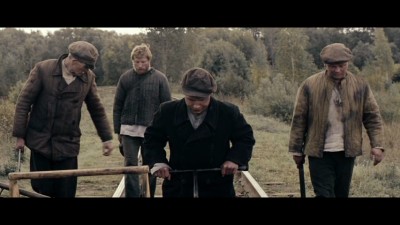 Loznitsa opens the physically and metaphysically brutal journey that is In the Fog (which he has adapted from a novel by respected Russian writer Vasili Bykov, also author of the book from which Shepitko made The Ascent) by throwing down a narrative and stylistic gauntlet, leading us intimately with his camera via a very long, unbroken traveling shot through the small German-held Belarussian village where the film takes place, close in with Hitler's soldiers as they march three Russian prisoners down the main road, through the wailing, desperate village and toward their fate, a public gallows where they will be hanged as an example of what happens to Russians who would conspire to resist German conquest. This is a prologue, before the opening titles; the remainder of the film shifts back and forth, in non-chronological order, in the chain of events whose central link is represented by the hanging: The arrest by partisan Russian soldier Burov (Vladislav Abashin) of his fellow villager Sushenya (Vladimir Svirskiy), ordering him discreetly away from his peasant wife and son to kill him, as Sushenya was a colleague and fellow prisoner of the men who were hanged and presumed to have betrayed them to the Germans; the persecution of Burov at the hands of Russian collaborators with the German occupiers, which radicalizes the formerly apolitical mechanic into an act of sabotage that sets off his career as a rebel in the Russian resistance; the nefarious reasons why the German-approved traitors in charge of the village allowed Sushenya alone among his group to survive; and the ultimate realization, by both Sushenya (whose mandated murder is disrupted by a German attack that wounds Burov instead) and his captors, of the ever-unconscionable brutality, mistrust, and despair bred by war no matter which side you are, or are presumed to be, on. 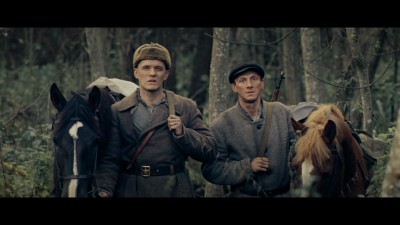 Wisely, Loznitsa has once again recruited cinematographer Oleg Mutu (who shot My Joy and several excellent Romanian films, including 4 Months, 3 Weeks, and 2 Days), who lends the film's static, alternately vast/sweeping and nearly abstractly cloistered landscapes (the clime and the land, here as in so many other Russian films, are vital and paid great heed) and close-in handheld movements a pristinely clear immediacy that also seems effortlessly to encompass any and all beauty that might be present in any given shot. Along with editor Danielius Kokanauskis (who also cut My Joy), Loznitsa uses Mutu's often quite long shots to crate a measured, spellbinding tempo within the film's chronologically disordered segments, and slowly fades down as one "episode" climaxes and slowly up again to mark the beginning of a new, disorientingly unfamiliar one, as if each was a movement in some symphony deliberately and masterfully conducted symphony conducted always with an eye on the range and fineness of impressions it's supposed to leave and responses it's meant to elicit. 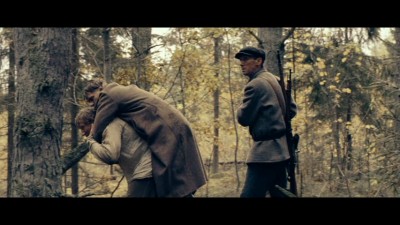 We all know, of course, that "war is hell," that the waste and mayhem and gore of even the most justified war are intolerable. But, without ever diminishing the realities of physical violence and destruction experienced by the Russian people during the clash it depicts, Loznitsa's telling of Bykov's tale goes past the immediate, gut repellence of combat and torture to explore the more insidious tearing of the fabric of daily human life that war inflicts in the hearts, minds, and homes of anyone in its path. Sushenya's conundrum (as conveyed through Svirskiy's beautiful performance; his eyes say every bit as much as the dialogue) has him falsely accused, facing down life and death through no fault of his own, and it's both tragic and scaled away from saintliness, rendering the character recognizably frail and vulnerable in his all-too-commonplace nightmare. The film is ultimately Sushenya's story, and as such, it's potentially the story of virtually any one of us, what our circumstances might turn out to, what we might face if war were to enter, unbidden, into our routine and ordinary lives. The impact that In the Fog makes is thus as unsettling as it is profound: It's a wrenching cry of "oh, the humanity" that reminds the viewer at every turn that humanity includes him or her, too. 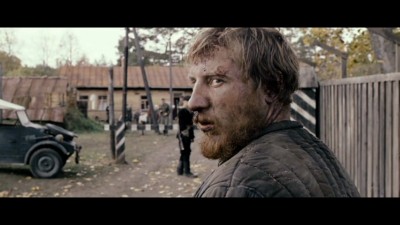 
It anamorphically preserves the original theatrical widescreen aspect ratio of 2.35:1, and the colors, blacks, and skin tones come through passably well, but otherwise, the transfer of the film is only fair to relatively poor; quite a bit of aliasing and a sort of subliminally stuttering, YouTube/delayed feel to the images (possibly driven by an unusually low bit rate) are present throughout. One hopes that In the Fog will be released in an edition of the quality it deserves at some future point; this one is watchable in the meantime, but with noticeable flaws.


The disc's Dolby Digital 5.1 surround track (in Russian with burned-in (non-optional) English subtitles) does a good, subtle job with the film's almost entirely score-less but carefully naturalistic sonic environment, with all dialogue sonorously immediate and full, and no distortion or imbalance at any point.


None, except for the film's theatrical trailer. 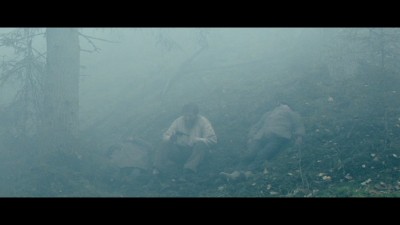 Sergei Loznitska follows up his excellent contemporary philosophical journey My Joy by taking a similarly-minded jaunt into his homeland's past with In the Fog, a film set in rural Russia during WWII that fits beautifully into a long tradition of Russian movies that both capture the specific local horrors of that specific war (which still scar and linger in the Russian mind) and traverse the most delicate existential, moral/ethical, and political questions ultimately faced by us all. Loznitska's patient, asymmetrical, reflective unspooling of novelist Vasiki Bykov's story regarding a presumed Russian collaborationist, his assigned partisan assassin, and the circumstances that force their paths unwillingly to cross makes for a dense, tense, sobering and meaningful work. The picture quality of the DVD leaves a bit to be desired, yet the film demands to be seen regardless; it beautifully enfolds the foregrounded doom and despair of war to riff poetically (in both the visual sense and in the narrative, dialogue exchanges, and performances) on the eternal philosophical questions like some perfectly calibrated cinematic reiteration of Waiting for Godot, and comes Highly Recommended.