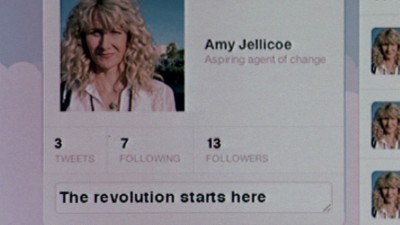 The down-to-earth smartness and sideways-glancing, sardonic humanity of Mike White (actor, screenwriter (The School of Rock, and co-creator of Freaks and Geeks -- the one who in retrospect deserves the credit for balancing that show away from full Apatow-ness) seems to be especially well-suited to the theme of true, searing, single-minded idealism hitting the impenetrable wall of humdrum, decidedly non-idealistic reality: Whether it's the adult, played by White himself, clinging to a perfect but long-gone childhood crush/co-experimentation (Chuck & Buck), Molly Shannon's newly-converted, increasingly assertive animal protectionist in Year of the Dog, or, now, Laura Dern's corporate-reforming Amy Jellicoe in the HBO series Enlightened, White has a way of looking at the characters he writes, their needs and concerns, and the world itself that usually comes across initially as unpresumptuous, self-possessed, modest, and calm -- "light" -- only to sneak up and shake you with unexpectedly complex provocations and moral conundrums. White sees things from multiple angles, but never fantasizes that "objectivity" is possible or even desirable; he convinces us that his sometimes self-righteous, deluded, or self-aggrandizing crusaders' intentions are, indeed, good and right at the same time he exposes the limits of good intentions and being right. And he lets us laugh at his people, their various oddities and foibles, without ever judging or condescending to them. At its best, White's vision and deceptively simple-appearing storytelling approach make for very affecting tragicomic morality tales that genuinely provoke without shock tactics, and inspire you to think and query the status quo without ever preaching. 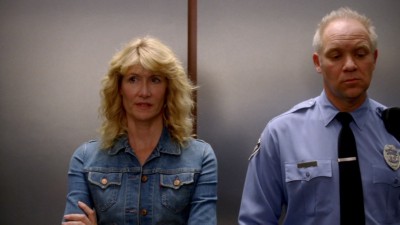 The second (and, unfortunately, final; the show was then canceled) season of Enlightened, White's series for HBO, finds his sensibility and craft mostly "on" for the eight-episode arc, a bit more so than in the intriguing but shaky first season, which sometimes flirted a bit with an Office-style workplace-sitcomminess that didn't tap the best comic and dramatic potential of White's writing or his cast. The focus in season two is less on the dynamics of the colorful coworkers of Amy Jellicoe (Dern), demoted in her company to the basement department of tech-geek rejects and misfits after a breakdown and a stint at spiritually-awakening rehab got her fired and rehired at Abaddon, a huge SoCal-based corporation the civic and social irresponsibility of which she was determined, in season one, to mitigate from the inside. Now, after the daily grind and a bombshell glimpse of corruption at the top has convinced her of the irredeemable rottenness at the core of Abaddon (and, by extension, the pride of place held by endlessly-increasing corporate profits in America's list of political priorities) and is engaged, along with reluctant comrade-in-arms Tyler (White) in a corporate-espionage and whistleblowing plot meant to publicly disgrace and destroy Abaddon by revealing the payoffs from CEO/oligarch Charles Szidon (the pretty much always-wonderful character actor James Rebhorn) to prominent politicians in return for the company's hushed-up immunity from the rules of law, ethics, and common decency. 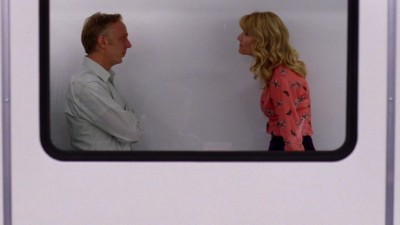 But the show is no procedural; its focuses and tone are much more on that crazy, unstable intersection where the social, the emotional, the psychological, and the political play out at the mundane, daily-life level, where Amy Jellicoe's always sincere but sometimes pompous or deluded zeal is faced with the prosaic complications of being so deep in debt she has to live with her altogether too practical and fantasy-deflating mom (Diane Ladd, Dern's actual mother); working in a basement with a bunch of oddballs decidedly less idealistic than she (a group that most memorably includes, along with White's self-deprecating, painfully unassuming Tyler, who this season has at long last some romantic connection in his life courtesy an executive secretary played by Molly Shannon, actor Timm Sharp's as Dougie Daniels, the cocky, Tourette's-mouthed boss with a heart of gold); and choosing between the elusive glamor of an affair with the hot, smart, and admirable investigative journalist (Dermot Mulroney) she's enlisted to amplify her whistleblowing, and her much less pure but much more available ex-husband (a perfectly hangdog, taciturn Luke Wilson), who's followed Amy's advice to attend her life-saving rehab sanctuary and now wants to atone and start over with her. White's writing (and, on many episodes, directing as well) and a bevy of well-cast, insightful performances manifest his unique tonal magic throughout; he really does have us laughing unequivocally with, never at, these people, for whom he clearly has deep but not blind affection, and there are moments of fairly sublime sweetness and affecting drama that balance nicely with White's proprietary brand of humor. It takes a near-surgical calm, patience, and observational wherewithal to dig through and examine people's weak, uncertain, compromised spots without ever mocking or neutralizing them, and these are all qualities White possesses both bountifully and in a most unusual ratio. 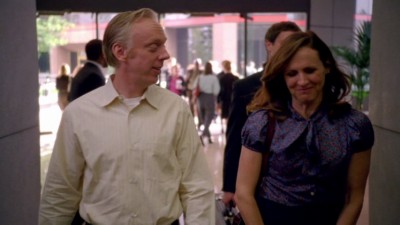 If there's one level at which White's general commitment to being unpresumptuous and to character-centric storytelling risks becoming complacent on Enlightened, it's at the stylistic level; with direction on some episodes by such notable filmmakers as Nicole Holofcener (Please Give) and Todd Haynes (I'm Not There) and the commercial-free, premium-cable pedigree of the program, the cinephilic viewer possessed of the delighted conviction that new-golden-age TV shows like Mad Men are more cinematic than many contemporary theatrical films could be pardoned for finding Enlightened a bit underwhelming and anachronistic -- too ready to follow TV-show conventions of pacing, editing, music cues (though the score by Mark Mothersbaugh is often used to nice comic effect) and visuals (some thoughtful, inventively tailored shot setups and camera movements sit alongside many more that range from plain/serviceable to uninspired). Still, if one occasionally has the impression that those behind the camera aren't quite taking advantage of all the creative possibilities afforded by HBO (which has brought us such real-movies-for-the-small-screen as Mildred Pierce, The Sopranos, and Behind the Candelabra), it's never enough to seriously diminish the well-played, amusing and moving tension between Amy Jellicoe's utopian vision of her life and its much more complicated and contradictory realities. White has a vision of the human fate as a struggle that's unlikely ever to reach full, positive closure, and he's allergic to pat optimism or unqualified happy endings, but his sweet, eagerly interested acceptance of everyone and their failings makes for a very pleasing, unlikely back-and-forth between breeziness and substance. He's fully willing and able to let you cringe when necessary at Amy's missteps, naivete, and accidental pettiness, but he never lets you wish she'd consider just giving up and going along; in the world of Enlightened, that would be the only truly unforgiveable mistake. 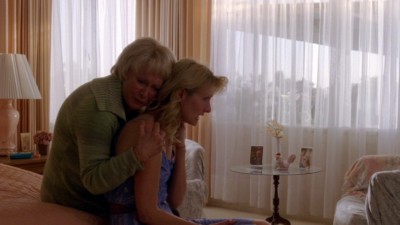 
Presenting each episode anamorphically at its original widescreen broadcast aspect ratio of 1.78:1, the two discs of Enlightened mostly do better than passably by the series; the stark-white opening credits seem to come up a little aliased-y and soft each time, but things quickly solidify, and there are no noticeable problems of aliasing or other compression artifacts other than perhaps some very slight edge enhancement/haloing overall. The colors look good and vivid, skin tones good and darks solid, but it seems like another sad sign for this orphaned series that no high-def (Blu-ray) edition has been released, because things do look a bit (normally, but somehow nigglingly) muted in standard-definition for what is often cinema-grade cinematography over much of what meets the eyes here.


The discs' Dolby Digital 5.1 surround sound track is absolutely everything it needs to be, with all dialogue and ambient sounds ringing true, clear, full, and immediate, and Mark Mothersbaugh's sometimes hilariously terrifying, prominent score coming across especially effectively, in all its dimensions. No imbalance, distortion, or muffling mars the pristine and rich sound at any point. 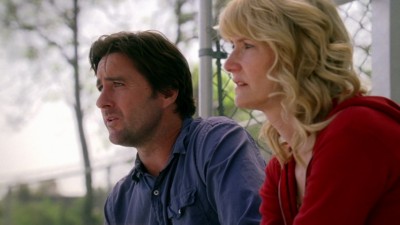 
--Audio commentaries for selected episodes (a total of three for eight episodes, but each well and conscientiously crafted -- quality over quantity) featuring, where most appropriate (i.e., the particular episodes most prominently featuring the performer or producer in question) actor/producer Mike White, producer Dody Dorn, and actors Laura Dern, Luke Wilson, Molly Shannon, and Dermot Mulroney. It's all as affable and lighthearted (the actors, especially, self-deprecate and tease each other), yet intelligent, affectionate, and multidimensional, as you'd expect from a team that's aimed so atypically high to give you various rich layers of their series' themes and characters -- well worth a listen.

--"Inside the Episode" promotional segments (1-3 min. each) HBO does for all of its series that, in typical high-quality fashion for the premium-TV channel, goes conscientiously beyond promotion, sitting down briefly but insightfully with creator Mike White for a mini-explication/discussion of each episode.

--A Season 1 recap that succinctly and helpfully gives the background ahead of time for those who'd like that rather than inferring it as you go through the second season, though that's entirely doable as well. 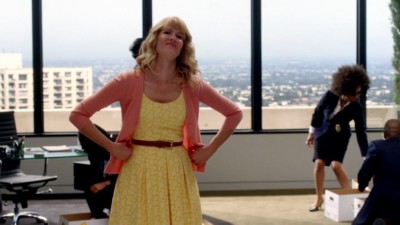 Of course they had to cancel it just when it was getting good, but we'll always have season 2 of Mike White's quietly bold, provocative, complex, and very sardonically funny Enlightened. This time, the series takes a healthy turn away from the ensemble-sitcomisms that bogged it down too often in season 1, and opts instead for a well-advised focus on its principal protagonists, particularly Amy Jellicoe (the ever-excellent Laura Dern), a middle-aged woman returned from rehab and engaged, from the inside, in right-on anti-corporate subterfuge the motivations of which slide indiscernibly from the most noble to the most homely (if not outright petty). The series's mix of oft-pedestrian (if fully competent and never ingratiating or too bland) style in visuals, editing, music, etc. and a not at all pedestrian approach to character, story, and performance doesn't always gel or go as far as it might, but it's a perfectly enjoyable and unusually smart story-in-episodes that plays out in an ultimately very engrossing and satisfying way, all while maintaining a surprising degree of nuance and complexity (even, at times, branching off from a resolutely straightforward visual style to do something more expansive and cinematic). It has all the courage of its progressive-leftist sociopolitical convictions, but it never stoops to or stops at preaching to the converted; in consistently, beautifully acknowledging that you can at once be right and confusedly all-too-human, it's another worthy iteration of Mike White's patented, genuine, unadorned, surprisingly deep humaneness. Recommended.