Expect opinions to be divided about Jonathan Glazer's return to directing after a decade away (Birth was released in 2004). With Under the Skin, division is exactly what he's going for. Everything about his adaptation of the violent science-fiction novel by Michel Faber is designed to work on two levels: the audience's expectation and Glazer's undermining of the same. It's a violent movie with virtually no violent acts committed on screen. It's a movie about sex that avoids titillation. More importantly, it's about seduction, but Under the Skin seeks to repel you as a method of drawing you in.

The unfortunate nature of movie reviews is that most people reading them are looking to get some sense of what a movie is about. Under the Skin is a difficult film to describe, however; it's like one giant spoiler. Glazer opens the movie within a void, slowly plugging his viewer into the cinematic obstacle course that awaits. There's no explanation for that first startling image--yet, we intuitively understand how and why Glazer is showing how that peg fits into that hole. This is the way it is with the whole of the film. The filmmaker is building something, piece-by-piece, scene-by-scene, but no one ever stops to tell you what that something is. Under the Skin has the patience of a Tarkovsky film while being a serial killer mystery with all the investigation and, as a result, the exposition, excised. Even the trailers have been carefully crafted to give nothing away. That's how deliberate the execution.

The short form explanation is that Scarlett Johansson plays a mysterious woman who roves Scotland in a van picking up young men walking alone. The why of this activity is revealed, in part, over time, as is the outcome of each encounter. With each successive instance, Glazer teases out a little more. We see where the woman takes them, and start to understand what she does with them--though in an abstracted sense. Stepping inside Johansson's lair is akin to going through the monolith in 2001: on the other side is something we recognize, but it's presented as a dreamlike puzzle. Are we in some kind of sci-fi abattoir, or is it all just symbolic of the dangerous tar pit of lust that each man willfully wades into? 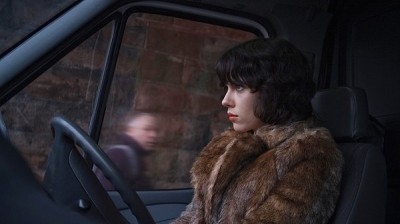 Glazer developed his chops through the 1990s and the early '00s as a music video and commercial director, helming memorable videos for UNKLE, Radiohead, Blur, and Massive Attack. His narrative work still bears the marks of this training ground. Under the Skin is a perfect melding of sight and sound. It's both about how we see what happens and what we hear as the events unfold. Shooting guerrilla style on the Scottish streets, often ambushing real, unsuspecting pedestrians, Glazer and cinematographer Daniel Landin (44-Inch Chest) create a jittery observational platform. The voyeuristic point of view, as others have suggested, mimics the look and invented fantasy scenario of a lot of amateur porn, where allegedly random nobodies are plucked from the sidewalks to participate in X-rated activity. This kind of predatory undertaking only works for the hunter when the prey is seen as anonymous and disposable. The moment Johansson's character stops to think about whom she is with, that's when things start to change.

Recently when I reviewed Denis Villeneuve's Enemy, I wrestled with trying to decide if the music in that film was an effective tool in the director's creepy arsenal or too on the nose. After hearing Mica Levi's bizarre, ambient score for Under the Skin, I'm no longer on the fence. This is how it's done! The frontperson for Micachu and the Shapes has created a discordant soundscape that works on one's nerves, plucking at the audience in a manner that is sometimes invasive, keeping us uneasy and as off-kilter as Glazer would intend. The entire sound design of Under the Skin chafes against the film's imagery. The industrial noises and atonal scratchings sound as if they are beamed in from another dimension, disrupting the reality of the street scenes like a foul wind. When we cross the threshold into Johansson's domain, only then does the sound open up, becoming large and enveloping. If Levi and the entire audio department doen't end up competing with the kind of big-budget effects movies that generally take the awards for sound effects, I'm going to turn over some tables.

Likewise, if Scarlett Johansson doesn't get noticed for her considerable performance. As a long-time fan and Johansson defender, I feel the variety of films she can currently be seen in, and the quality of work she does in each, vindicates my advocacy. In cinemas right now, you can also see Johansson as a butt-kicking super spy in Captain America: The Winter Soldier or hear her as the voice of the artificial intelligence in Her. As Black Widow, she is commanding and visible; as the operating system, she is warm and friendly, managing to create a fully realized persona with just her voice. One performance is almost purely physical, the other the complete opposite. Her work in Under the Skin lies somewhere in the middle. She tells this woman's story almost completely through body language and behavior. Rather than having her physical presence stripped away, she has had all personality removed. Her character starts at zero and builds, learning from observation and interaction. The subtle changes she goes through, taking her from a place of cold confidence to confusion and insecurity, show a clarity of thought and purpose. It's an intelligent performance, putting to use the actress' celebrity, turning our gaze back on us.

I could go on. Under the Skin is the kind of movie that obsessive cinephiles could talk about for hours on end. I've already had two great conversations with friends over drinks, picking apart each scene, comparing impressions, and decoding Glazer's considerable technique. It's also the kind of film that many moviegoers hate critics for loving. Many will be as antagonistic with the narrative as the narrative is with its audience. When Under the Skin pushes against you, it's best not to push back. Rather, let it bowl you over. 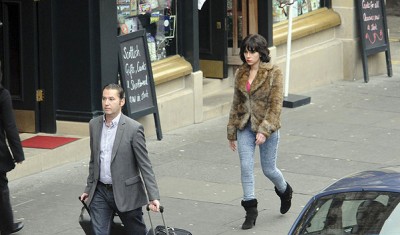