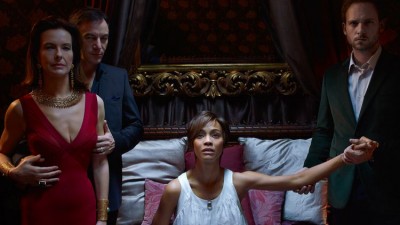 I'll admit, sometimes the deck is stacked. Even as we endeavor to walk into something like this 2014 television remake of Rosemary's Baby with an open mind, it's hard to shake that it isn't that other version that we like so much. Even if deep down we want to love it because it somehow recaptures the same qualities that drew us to the predecessor, we also secretly hope that it will be awful so we can dismiss it outright. Think, for instance, of the remaking of Robert Wise's The Haunting--fantastic becomes terrible. As opposed to, say, something like Scorsese's Cape Fear that puts its source in a mixer and shakes it up. Liking both is perfectly allowed.

More difficult to assess is a movie like last year's remake of Carrie. It's pretty much a straight cover version, its updates merely cosmetic. While this helming of Rosemary's Baby goes a little further in terms of how it alters and expands the story, it weirdly falls closer to the Carrie side of things than anything else. Made for television and billed as a miniseries, it's really one long movie--easily twice as long as it needs to be--with nothing to really hate about it, but no real exciting reason for why it should even exist at all.

Zoe Saldana (Guardians of the Galaxy) takes over as producer and star, casting herself as Rosemary, the mother-to-be whose struggles with maintaining her pregnancy have cast a melancholy pallor over her marriage. So much so, that by the time her and her author husband Guy (Patrick J. Adams, Suits) move to Paris--where the story has inexplicably been transplanted--they have all but given up on even trying. So much so, that it takes until the end of the first episode for Rosemary's infamous impregnation, complete with an altered version of the line, "This is no dream! This is really happening!" Now the cry is "This is real"--which is far more concrete than "really happening," if you think about--and it caps episode one.

Which will make you think, "Oh, thank goodness, finally," and get your hopes up for episode 2. Because you just spent an hour and twenty minutes watching Rosemary and Guy settle in Paris, struggle with the language, and get to hate and love and hate their new friends, the residents of the cursed apartment building where they eventually move in. It is owned by the overly friendly Margaux and Roman Castevet (Carole Bouquet and Harry Potter-villain Jason Isaacs), whose boundary issues are oogier than the Satanic cult they harbor in their back room.

While there are a couple of creepy moments, usually involving an untimely death, in the first part of Rosemary's Baby, the true horror should settle in during the second part. This is when Rosemary struggles with her difficult pregnancy (that is a demon child in her womb, after all) and starts to suspect that there is more going on than she thinks. More people die, everyone around her exerts ownership over her body, and she starts to fall into ill health. In truth, a lot of the time, you'd think Agnieszka Holland (The Secret Garden) secretly wishes she were directing a Lifetime movie about abusive husbands and a woman's right to choose rather than a horror movie, because her Rosemary's Baby has very little horror to it. Whereas Roman Polanski's 1968 original gleefully celebrated the goofier aspects of the story while exploiting the whole thing to a weird and wonky effect, Holland plays it safe, neither too sexy nor too scary. The hallucination sequences are slathered in crystalline light, as if covers to cheap romance novels and diamond commercials were the director's main source of inspiration. While her aesthetics do shift admirably toward the more visceral when there is violence, it's kind of telling that the most grisly gore is seen in the many hospital scenes. Too bad The Knick came along and trumped her close-up shots of open surgical entry points.

The whole thing kind of trundles along like this, with Zoe Saldana valiantly trying to retain the audience's interest and heroically maintaining her own. She is quite excellent on screen, exhibiting a natural comfort in front of the camera, giving Rosemary personality that extends beyond Mia Farrow's wide-eyed panic and psychosis. That may be the one benefit of the extended running time, we get to know Rosemary before she starts losing her grip. At the same time, Saldana's commitment to realism hits a couple of brick walls: namely, Adams' barely there personality playing her husband, and Isaac's cartoon-wolf take on your garden variety Satanist. His consistent expression is of being the cat who just ate the canary. Presumably just before he got on screen, as there are never any visible canaries about.

So, again, what's it all for? Beats me. Presumably Zoe Saldana saw a potential star vehicle for herself and made it happen. If so, she picked the wrong venue and the wrong support team. I know the conventional wisdom amongst studios is that things like Rosemary's Baby have a cultural caché and audience recognition, but given that the Polanski classic is streaming on Netflix and is otherwise easy to get hold of in this day and age, I'm not sure that matters as much as they'd like. Still, with that justification in mind, Rosemary's Baby: 2014 is an all right product as products go, but too clearly a product all the same. 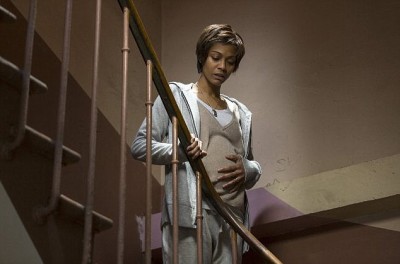 Video:
The 1.78:1 broadcast ratio of Rosemary's Baby is preserved here, AVC-encoded in 1080p for high-definition. The picture itself is excellent: crisp with strong details and amazing colors. Paris streets look phenomenal, with a deep view in wider shots that show the breadth of the city. The tiny details in the apartment building, be they in Rosemary's apartment or the more insidious backrooms of the coven, are really clear and easy to marvel at. The production design did their work, and the Blu-ray makes sure you know it. Likewise, for as much as I made fun of Holland's soft-filter erotica, the effects look stupendous on this single-disc release.

Sound:
As should be expected, a 5.1 DTS-HD Master Audio mix is provided, and the folks in charge make do with what they have. Volume levels are excellent and there can be some nice back speaker effects from time to time, but overall, this is another fault of the production: for a horror movie, the filmmakers don't do all that much with sound. No creepy gross-out effects, no well-placed bumps in the night. It's all pretty much up front and uncreative from the start, so there is only so much the guy behind the mixing desk can do.

There are Spanish subtitles and English SDH.

A digital code for watching Rosemary's Baby through the Ultraviolet platform is also included, in case you wanted to make an already dreary experience even worse.

FINAL THOUGHTS:
Rent It. There wasn't really any need to remake Rosemary's Baby, but hey, Zoe Saldana in a modern setting taking over the role of devil's concubine doesn't sound all that bad. Maybe there was more in the book they could mine by adding to the running time and making it a TV miniseries, right? Not really, no. Saldana is fine, and I guess it doesn't matter that this New York spook story is not set in Paris, but not much here really clicks. Tepid direction, undercooked supporting performances, and a decided lack of frights make this one almost a complete loss. 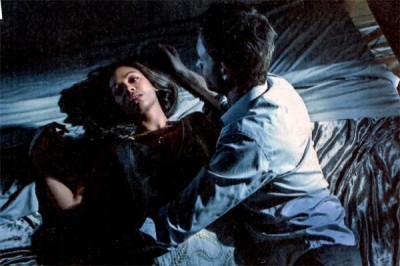