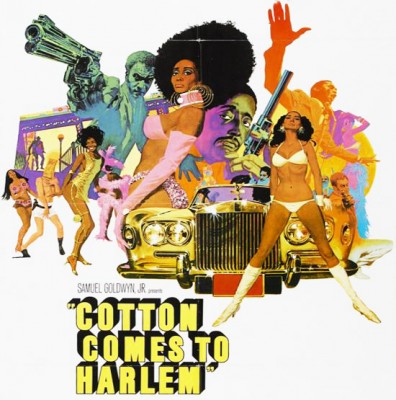 Sometimes you really do come across a movie and think, "Where have you been all my life?" Watching Ossie Davis' 1970 blaxploitation picture Cotton Comes to Harlem last night, I couldn't believe I had waited all this time to see it. I missed the memo that it was such a fun blend of energy, politics, and genre subversion.

Based on a book by Chester Himes, this spin on pulpy police stories features two New York City detectives on the hunt for money stolen from a dubious charity. Smooth-talking Reverend Deek O'Malley (Calvin Lockhart, Coming to America) collected $87K from Harlem residents promising them passage on a boat to take them back to Africa and away from the oppressive conditions of the American state. No sooner has the cash been gathered than armed robbers make off with it. Deek and his henchman chase the getaway van in their gold-plated armored car, and they in turn are pursued by Grave Digger Jones (Godfrey Chambers, Watermelon Man) and Coffin Ed Johnson (Raymond St. Jacques, The Green Berets), the police officers assigned to the Harlem beat.

Just about everything you need to know about Cotton Comes to Harlem is in these opening scenes. It's a mingling of life on the streets and black politics, with Black Panther stand-ins the Black Berets squaring off against police and taking exception to O'Malley's hokum even while everyday citizens cheer him on. There are bullish white officials hanging around, asserting their own agenda, and there are also lots of colorful characters, including a junk collector (Red Foxx), a pickpocket (Van Kirksey), and a street painter (Cleavon Little). Once the chase is underway, Davis, who is perhaps best known now as the actor who played Da Mayor in Do the Right Thing, throws all pretense out the window. He and cinematographer Gerald Hirschfeld (Young Frankenstein) take in everything along the escape route, letting the cars go on their merry way while they stop to look at what's happening on the sidewalk. The digressions are generally humorous--an undertaker puts on his good hat and jacket to await the oncoming business, a catcaller nearly has his head blown off while admiring three lovely ladies--and meant to give a flavor of the neighborhood. Davis is both playing with and celebrating African American stereotypes, taking a certain ownership of them while poking the white gaze in its eye. This is, after all, a pursuit where the cops spin out after crashing into a watermelon cart. Their frustration here and throughout Cotton Comes to Harlem is both with the perception of their community and how often members of it fall into the trap of conforming to negative stereotypes. These are guys just trying to do a job, but everyone and everything manages to get in their way. 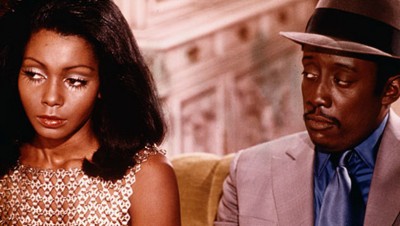 From there, Cotton Comes to Harlem has one major plotline--finding the money, which has been hidden inside a bale of cotton that went missing in the shootout--but Davis isn't afraid to go careening off in whatever direction strikes his fancy. Some of the action is predictable--a gunfight at the junkyard, for instance, follows certain expected standards--and others not so much. Davis' regular go-to for disrupting everything is O'Malley's spurned girlfriend, Iris (Judy Pace, Brian's Song). Neither a femme fatale nor a patsy, Iris is a self-determined agent of chaos. In one hilarious (and sexy) scene, she seduces a white cop in order to trick him into lettering her go; in another, she brains O'Malley's new mistress, and then nearly gets the Reverend locked up for it.

The Reverend himself is your typical snake-oil salesmen, but it's interesting that most of the resentment that comes his way is for missing an opportunity to be a true leader. Gravedigger and Coffin think he's scum not just because he preys on his own people, but he colludes with white crooks to do it. Though, this is also status quo: not only do the cops acknowledge that their hands are sometimes tied by their white bosses, so too does Harlem's leading crook (Maxwell Glanville) answer to an uptown mafia boss. Every choice that Davis and his co-writer Arnold Perl (Malcolm X) make is a political one.

Yet, Cotton Comes to Harlem is far from a message picture. Rather, it follows the grand B-movie tradition of nestling its more enlightened points within genre tropes, disguising the larger message with sex and violence. One could easily watch Cotton Comes to Harlem at face value and it's still a cracking good time. Weirdly enough, the anything-goes tone reminds me of anime, the way the storytelling flits from action to drama to comedy to scandal without ever really stopping to worry if the viewer is ready for the mood swing. It's the sort of film where you just have to strap yourself in and prepare yourself to accept whatever comes next. Because, geez, it's a blast getting where you're going, and so worth it once you realize where that is.

Video:
Kino releases Cotton Comes to Harlem in widescreen, preserving its 1.85:1 aspect ratio. The 1080p high-definition transfer is very nice, with excellent colors rendered with a pleasing grain that maintains the look of the original celluloid. Resolution is mostly sharp, though brightness can be inconsistent. There is only occasional surface noise on the picture.

Sound:
The soundtrack has a new 2.0 DTS Master-Audio mix that sounds great. Tones are clear and there is no distortion or extraneous interference. Music sounds strong, dialogue is easy to hear.

FINAL THOUGHTS:
Highly Recommended. A highpoint of blaxploitation and of 1970s action movies in general, Cotton Comes to Harlem is smart, rollicking crime picture that never takes itself too seriously even while it has very serious things to say. Ossie Davis' movie features two police detectives on the hunt for stolen cash. The money trail leads them through all aspects of the African American community, pitting them against would-be black leaders and the self-important white bosses who think they are calling the shots. With lots of detours and a gonzo sense of comedy, Cotton Comes to Harlem kicks the wheels off standard narrative structure and goes for it whole hog. The result is an exciting, often uproarious example of genre done right. 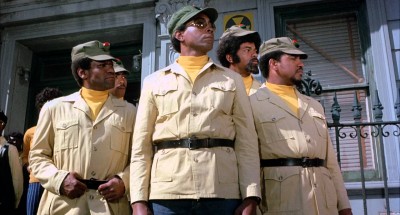