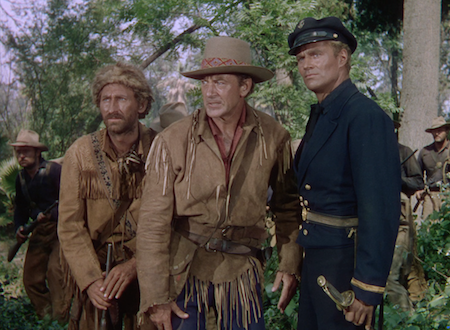 Gary Cooper stars in 1951's sort-of-western (southeastern?) Distant Drums, an independently produced action thriller that plops a small group of soldiers in the middle of the Florida Everglades during the Second Seminole War. Forced to cope with the harsh swamp, while dodging hungry gators and murderous Seminoles, the soldiers trudge their way back to their ship after successfully blowing up a Spanish fort that had been the Seminoles' firearm stockpile. The plot could be a precursor to Walter Hill's The Warriors or, perhaps more accurately, a pseudo-remake of the 1945 Errol Flynn vehicle, Objective, Burma!. (That second comparison is particularly tempting since both Burma and Drums share the same director, genre ace Raoul Walsh.) Distant Drums, however, is far simpler than either of those films.

That simplicity might be the most glaring flaw of this otherwise entertaining film. While it helps for an action film to be lean and mean, Drums feels oddly undernourished. For instance, the film opens by introducing us to Navy Lieutenant Richard Tufts (Richard Webb), a capable seaman who is nonetheless a little young and unseasoned, and a gruff, fuzzy-faced scout named Monk (Arthur Hunnicutt). Both of these characters provide a little color while we get filled in on the back-story and are hyped up for the entrance of our hero, the laidback but incredibly capable Captain Quincy Wyatt (Cooper). Once Wyatt is introduced, both gentlemen dutifully start to blend into the background, resurfacing only here and there when the story demands it.

Even Wyatt's love interest, a rescued prisoner from the fort named Judy Beckett, seems peripheral during the majority of the film. This is certainly not the fault of the actress playing her, Mari Adlon, who is a capable performer and a head-turner to boot. The script, credited to Duel in the Sun novelist Niven Busch and Martin Rackin, just doesn't find much use for her, apart from coaxing more back-story out of our hero. When she must decide whether to return to her old life or start anew with Wyatt in Florida, it comes off as too much of a plot contrivance to be emotionally engaging.

If the film tends to lose track of its characters that are not played by Gary Cooper, it doesn't flounder in other areas. Walsh's direction is taut and suspenseful, making the action scenes brisk and exciting. The climactic underwater knife fight between Wyatt and the Seminole chief is literally like nothing else I have seen before. The Technicolor cinematography by frequent Walsh collaborator Sid Hickox is lush without being fussed-over. Max Steiner's huge-sounding musical score gives the film a grandeur its presumably lower-than-average budget cannot always conjure visually.

The 50-year-old Cooper looks a little weary in certain moments, which can deaden the tension a bit and rob some of the romantic scenes of passion, but he soon snapped out of it. If Distant Drums is not well-remembered these days, Cooper's next film -- a little oater called High Noon -- has not suffered the same fate. 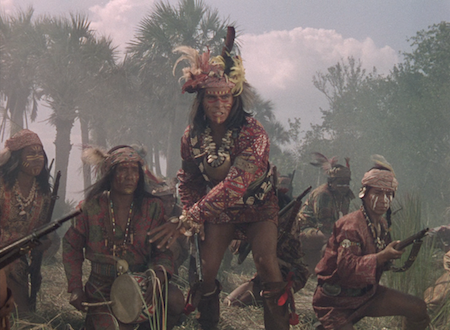 The Video:
Olive Films once again has offered a high-resolution transfer that picks up on the nuances of the original film image brilliantly -- but has not been digitally cleaned-up. This means that the AVC-encoded 1080p 1.37:1 transfer boasts gorgeous Technicolor images, which bring out the bright greens of the Florida swamp as vividly as the purplish blue uniforms on Wyatt's men, coupled with a pleasing film-grain structure and excellent fine detail reproduction. It also means that there is frequent speckling throughout the film. This damage is usually heaviest during what would have been the reel changes, during opticals (dissolves, etc.), or the far grainier stock footage that is sometimes incorporated to give the film more scope (and gators). These speckles, while sometimes distracting, are much more acceptable than the film damage present in Olive's disc of Stranger on the Prowl. Unfortunately, there is a one major digital hiccup: during quite a few of the outdoor night scenes (which were shot in almost monochromatic day-for-night), the sky is often rendered in inelegant, detail-obliterating blocks. It doesn't affect the main action of these scenes, but it seems like a QC slip-up or something, considering the overall quality of the encode otherwise.

The Audio:
Olive offers remarkably clean DTS-HD MA mono audio that highlights a deftly-mixed soundtrack, which smoothly blends Max Steiner's propulsive score with the dialogue and effects. And speaking of effects, Distant Drums is suggested by some historians as having the first usage of the Wilhelm scream (although our own DVD Savant suggests otherwise in his review of this film).

Final Thoughts:
Distant Drums is a flawed but quite watchable soldiers-vs.-Indians movie. The novelty of the Everglades setting and the snappy storytelling do a lot to make up for the flimsiness of the character development. The mostly excellent HD transfer puts this firmly in Recommended territory. 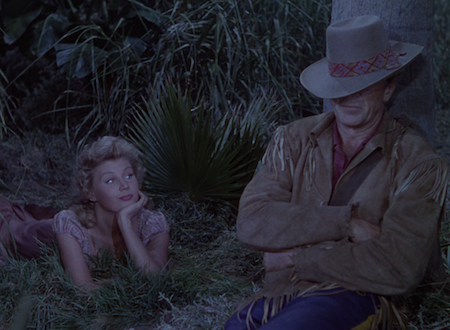