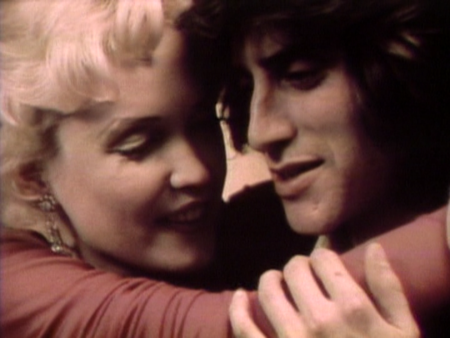 Although this newly released DVD set from stand-up comic and actor Richard Lewis has been titled Bundle of Nerves, it might have been more appropriate to call it Bundle of Crap I Found Lying Around My House. This new title would better speak to the lack of cohesion and consistency of the four selections spread across these two DVDs, as well as providing the only plausible reason they are seeing the light of day now. Lewis himself has been an amusingly neurotic part of the pop culture landscape for whom I've had a fondness since his late-80s/early-90s sitcom Anything But Love with Jamie Lee Curtis, so I went into Bundle of Nerves with high hopes. Soon, much like the title of the program on which Lewis has frequently guest-starred, I was forced to curb my enthusiasm.

), which, as Lewis kvells in two different introductions, was one of the programs Lorne Michaels chose to run in the typical Saturday Night Live time slot during one of the show's off weeks. It stars Lewis as a stand-up comic presumably not unlike himself called Billy Gondola. Billy decides it is time to make a real go at show business, so he hops on the bus from New York to Los Angeles, where he is greeted by all sorts of culture shock. Low on cash, Billy lives in a hovel with a next door neighbor who is an Australian Marilyn Monroe impersonator. He runs into real-life Hollywood oddballs, brain-washed cult members, self-deluded agents, songwriting cabbies, and even Dom Deluise and Nina van Pallandt. He struggles with his identity as a comic -- playing a drag show and attempting prop comedy -- before distilling it all into a more personal brand of joke-telling.

It's not such a bad idea for a 90-minute telefilm (67 minutes without commercials), but the execution is lethal. Director Gary Weis -- who did tons of film pieces for Saturday Night Live and had just co-directed Eric Idle's The Rutles: All You Need Is Cash before this project -- seems more interested in documenting those real-life oddballs, like the fellas doing shoeshines or the guys who made a business selling dinner table mats with foreign vocabulary on them or the dirty-minded old man in the health food store, than in seeing if his main story is, you know, funny. Though Diary kinda sorta finds its way eventually, the first 25 minutes have maybe two laughs in them. Lewis, who hadn't yet crystallized his persona as a neurotic Man in Black, has oddly written himself (along with co-writer Bennett Tramer) into a Bob Newhart-like straight man role, where he is left to react to the bizarreness around him. It's not a good fit.

In addition to Deluise and van Pallandt, there are also brief appearances by the likes of Stacy Keach, Oscar nominee Michael Lerner, George Jessel, and Bill Macy. Loudon Wainwright III also provides a theme song, "The Ballad of Billy Gondola." 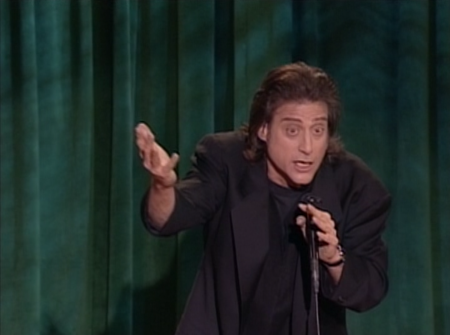 Now, we jump from Lewis's time as a struggling up-and-comer to nearly twenty years later, after he has long been established, with the 1997 HBO stand-up special The Magical Misery Tour (

). Lewis put out a DVD set of stand-up specials called Concerts From Hell back in 2005, but this one was excluded (maybe because it seemed too new?). It makes one wonder how much differently this particular special would play in that context, because it frankly suffers coming after Diary of a Young Comic. After Diary, I was in the mindset: "OK, I made it through that first one. Now I need to laugh." In Magical Misery, the energy is better and the jokes are sharper, but I never found myself laughing. Lewis's observations on topics as varied as public restrooms and his erections are all clever and amusing, delivered with the jazz-y verve of mid-career Lenny Bruce and flavored with the self-conscious neurosis of stand-up-era Woody Allen, but the laughs presumably rely on the audience getting swept up in Lewis's perpetual self-enveloping whirlwind of dysfunction rather than on big killer punchlines. And this time around, I had a little bit of trouble getting on Lewis's page. Again, this might be because I felt a little drained by the first feature, but I also suspect the lack of focus -- an issue Lewis somewhat addresses by pulling out a comically oversized list of topics he could potentially tackle -- might be part of the problem too. Overall, Magical Misery is a solid special, and one I am tempted to eventually re-watch outside of the context of this collection. 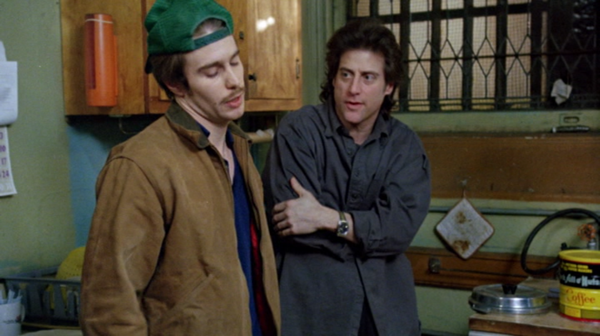 On Disc 2, we switch gears with the 1995 independent drama Drunks (

), the only film in this set I had seen before -- back when it hit VHS in '97 or '98. Back then, it was one of many star-filled indie films that lined my local video store's shelves, hopefully defying the common rule of thumb that if a movie has a bunch of people you recognize in it and you've never heard of it, it probably stinks. Drunks did not quite defy that rule then, but watching it now, it is apparent that the film has many more strengths than I initially understood.

Adapted by Gary Lennon (.45) from his stage play Blackout, Drunks takes place at an Alcoholics Anonymous meeting in New York City and unfolds almost entirely as a series of monologues. Though presumably the idea is to illustrate the great variety of people who find themselves addicted to alcohol, the effect is that of an acting competition, with seasoned pros squaring off against up-and-comers. Amidst some solid and some questionable acting choices, the only actor who successfully pulls off a Big Emotional Moment is Howard Rollins from TV's In the Heat of the Night; he plays a blackout drunk whose behavior led to the death of his own son. Meanwhile, Faye Dunaway puts in great effort as a harried mother whose son is a shoplifter, but she is easily outshone by Dianne Wiest, underplaying her role as a doctor who has a taste for scotch and demerol cocktails. A pre-fame Calista Flockhart hams it up while a pre-fame Sam Rockwell works on his quiet, squirmy charm. Parker Posey does a variation on her typical funny-bitch image from this era, while Amanda Plummer does a similar variation on her own awkward, agitated image.

The late Spalding Gray might be the film's MVP, playing a visitor who claims he is not an "alcoholic" but came into the AA meeting because he thought it was choir practice night. Being familiar with the style and cadence of Gray's speech from his own long monologues and Steven Soderbergh's documentary And Everything Is Going Fine, it is clear that Gray has either significantly rewritten his character's speech or created it from whole cloth, because the words fit him like a glove. As he describes to his fellow drunks the blissful activity of watching beer poured and then drinking it, Gray's character not only feels the joy of describing his hobby but quietly appears to realize that -- oh no -- maybe he really is an alcoholic. It's an emotionally complex but simply executed performance that stands with Gray's best work.

Lewis meanwhile has the trickiest role in the film. His character is the first one to tell his story -- about kicking booze for his wife, only to have her die suddenly -- and then, feeling utterly dissatisfied, he decides to leave the meeting and start drinking again. On a practical level, his character is there to open the film up from its stage-like main setting and also to give us some feeling of a story arc. Unfortunately, the journey of Lewis's character -- stopping by liquor stores he hasn't frequented in years, attempting to hook-up with an old junkie girlfriend, trying to score heroin to chase his drunk -- isn't particularly revelatory or even all that interesting. Unsurprisingly, Lewis comes off much better when his character is in monologue mode -- telling his life story during the meeting or spilling his guts to a sympathetic bartender -- than when he is interacting with other people.

Scene by scene, Drunks is hit-and-miss, but the highlights are surprisingly strong, making this the best piece included in the set. 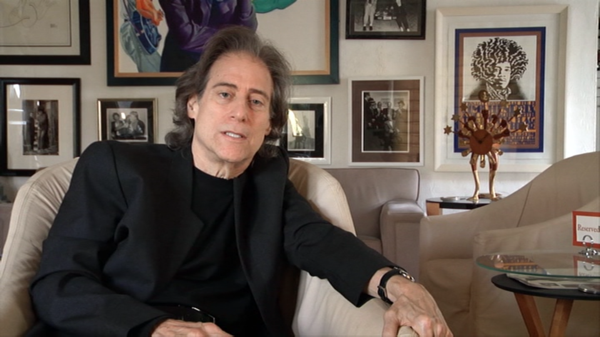 The final segment in this collection truly exemplifies the Bundle of Crap I Found Lying Around My House attitude. Titled House of a Lifetime (

), it is a 2013-shot documentary that follows Lewis around his house, showing off all the memorabilia and art he has collected over the years that he is now planning to get rid of. Some of the pieces are kind of cool, like vintage movie posters and cancelled checks from Jack Kerouac and Lenny Bruce, while other items paint Lewis as a hoarder (printed pixellated internet photos and random magazine covers).

Lewis banters non-stop, dropping names and sharing small anecdotes, making sure this pseudo-Cribs episode is perpetually charming and humorous, so there's no denying that House of a Lifetime is quite watchable. However, the general good vibes are not quite enough to justify the existence of this entire 46-minute short film. I don't want the time I spent watching House of a Lifetime given back to me, but I don't know that anyone but the most bored or Richard Lewis-obsessed need to sit through it -- that is, if they have not been assigned to do so.

The Video:
There's a variety of picture quality across the four programs here. Diary of a Young Comic has a fairly muddy standard 1.33:1 presentation. It looks like the program was shot on 16mm, but finished on tape. There are plenty of specks and scratches, plus a generally washed-out look that's lacking in fine detail. I expect, however, based on recent releases of the other film productions Saturday Night Live made at this time, that this is probably how the program has always looked. Magical Misery Tour has a marginally better standard 1.33:1 presentation. Shot on video, the special has a slick but dated look that allows for better color reproduction but still leaves something to be desired in the fine-detail department. Drunks is far and away the best-looking selection on the disc. I don't have the old 2000 DVD of the film to make a comparison, but I would not be surprised if this was an upgrade. On the website for Drunks, the filmmakers are selling a DVD version that they claim was encoded from a new HD master. Considering the excellent color, rich black levels, and great-for-SD level of detail on display here, I would not be surprised if this widescreen 1.78:1 presentation was also taken from that newer master. House of a Lifetime looks like it was shot with some kind of current prosumer camera. The widescreen 1.78:1 presentation is stable if unremarkable. Certain shots are noisy, but not excessively so.

The Audio:
All four programs feature simple Dolby 2.0 stereo audio mixes. The sound quality pretty much matches up with the video, with Drunks sounding the most impressive and Diary sounding the least.

- Richard Lewis provides five short introductions -- one for the disc set and one each of the programs. They are fine, but not really necessary.

Final Thoughts:
Bundle of Nerves is a jumbled mess. The indie drama Drunks is the clear highlight of this collection, and considering that the out-of-print 2000 DVD of that film is currently going for $30 and up online, it might be worth getting all the other junk just to check out that film. Well... I'm not totally convinced that's true either, so I say Rent It. 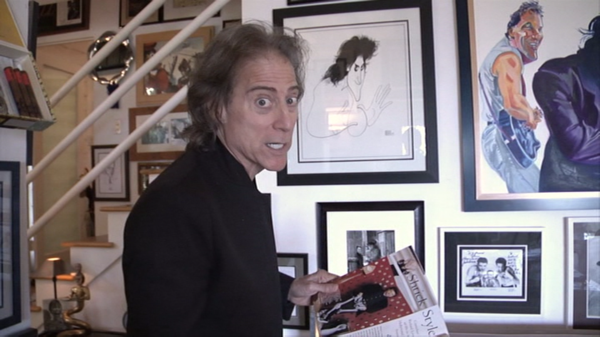