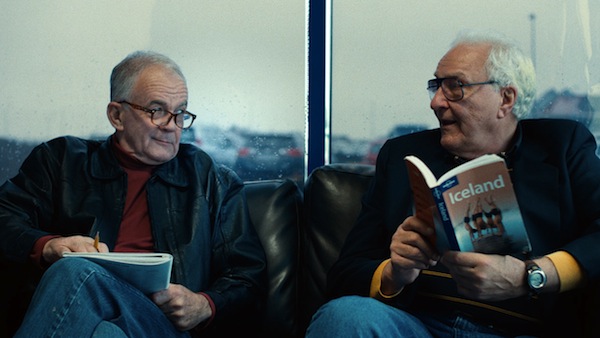 Land Ho! is mumblecore for the post-middle-aged. Co-directed by South By Southwest Film Festival alums Aaron Katz (Cold Weather) and Martha Stephens (Pilgrim Song), the film follows sixtysomethings Mitch (Earl Lynn Nelson) and Colin (This Is Martin Bonner's Paul Eenhoorn) on a trip to Iceland. Mitch is a brash American, somewhat childish and sex-obsessed, while Colin is an Australian expat who is more sedate and introverted. They used to be brothers-in-law by marriage, although Mitch has been long divorced and Colin's wife died years ago. Though the characters are given minor crises to deal with during the trip -- Mitch is a doctor who has just been forced into retirement while Colin has just divorced from his younger second wife -- there are no Hollywood-style redemption arcs coming for these characters.

Instead, Land Ho! is dialogue-driven and episodic, making it alternately boring, grating, amusing, and hilarious. Mitch and Colin don't bicker like a typical movie odd couple; it's more like Mitch bulldozes while Colin passive-aggresses. That means that often the scenes where Mitch and Colin are bouncing off of other characters are more palatable than the characters' two-handed scenes. The film immediately perks up when the pair run into Mitch's grad-student cousin and her friend, studying in Greenland and willing to teach the old guys a little bit about Jewish mysticism and Icelandic night clubs. A great moment of cringe comedy occurs when Mitch meets a honeymooning American couple and asks them how many times they've had sex since the wedding. And things turn downright sweet when the pair meets a vacationing Canadian woman whom Colin tries to woo with movie trivia and a bad Arnold Schwarzenegger impression. (Maybe celebrity impressions just occur naturally whenever two men take a Trip through Europe.)

In addition to all that yakking, the film is also a de facto travelogue that highlights the severe, overcast beauty of the Icelandic landscape. Mitch and Colin see lighthouses and geysers and waterfalls. They play on the beach, while Mitch points to a rock formation that reminds him of a giant penis. (The lighthouses and geysers make him think of sex too.) They swim. They get lost wandering the rolling hills at night, lit only by some glow sticks they picked up from a stoner.

The whole thing is punctuated by an oddly '80s-style score by Keegan DeWitt and the 1983 chestnut "In a Big Country." On the audio commentary, Katz and Stephens say they went for '80s music because they saw this film as being in the vein of an '80s buddy comedy like Planes, Trains, and Automobiles. That inspiration notwithstanding, Land Ho! plays more like a hybrid of last year's Old Goats and the deadpan films of Icelandic director Fridrik Thor Fridriksson than like anything Hollywood cranked out back in the '80s.

The self-conscious style and meandering structure mean that the film will never connect with a giant audience, but it contains lots of pleasant and charming moments throughout. I'm glad that films like Land Ho! exist, but I doubt I will ever bother to watch it again. 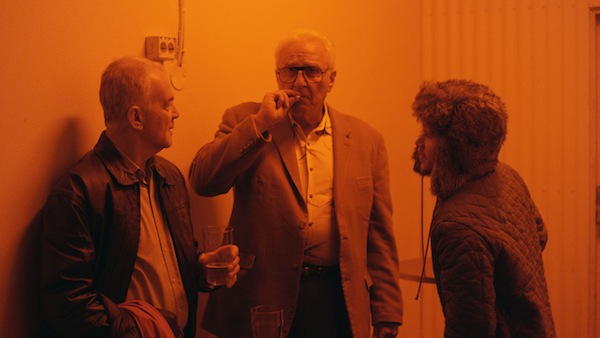 The Blu-ray
Land Ho comes packaged as a Blu-ray/DVD combo. Both discs contain the same options and bonus materials.

The Video:
Shot mostly on a Red One camera, Land Ho! has a clean, crisp digital picture that is nicely translated in this AVC-encoded 1080p 1.78:1 transfer. Though much of the film has a blue-gray, overcast look to it, the video also nicely reproduces the bright greens of the grassy hills and the warmer tones of many of the night-time interiors. Skin tones are consistent, and the black levels are suitably inky.

The Audio:
The main presentation is an English DTS-HD MA 5.1 audio mix that is clean and straightforward. Since the film is dialogue-driven, the majority of the sound is up front, with subtle atmospherics in the other speakers. All the channels do get a pretty serious workout during the music cues, which are typically louder and fuller bodied than the dialogue scenes. The contrast can be a bit startling, but it seems like an effect intended by the filmmakers. Other audio options include Parisian French DTS-HD MA 5.1, Spanish Dolby 5.1, and English Descriptive 5.1. The disc also offers English SDH, plus English, French, and Spanish subtitles.

- A high-spirited, semi-informative track. If there was any suspicion that Eenhoorn and Nelson were not playing characters in line with their own personalities, those theories are quickly dispelled within seconds after Nelson makes his first lascivious comment. Eenhoorn comes across as a little bit testier than he does onscreen, but for the most part, this is like a podcast sequel to the film. Katz and Stephens try to go behind-the-scenes most of the time but are sometimes waylaid in their attempts to tell production anecdotes by the gregarious Nelson. Still, everyone seems to be having a good time.

Final Thoughts:
As a fan of Cassavetes, I am pleased to see more and more low-budget filmmakers following his people-over-plots approach (whether intentionally or through osmosis). In that respect, Land Ho! is a solid experiment that yields plenty of great moments. I wasn't completely dazzled, but the flick has enough overall merit to be mildly Recommended. 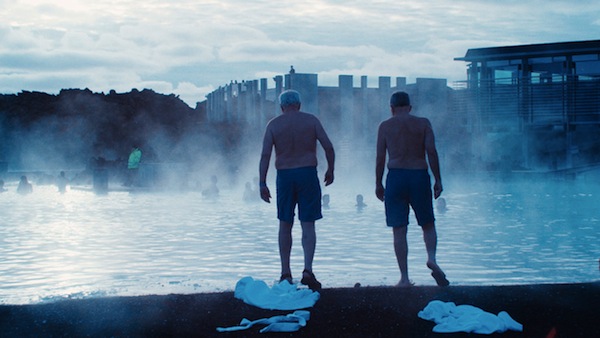