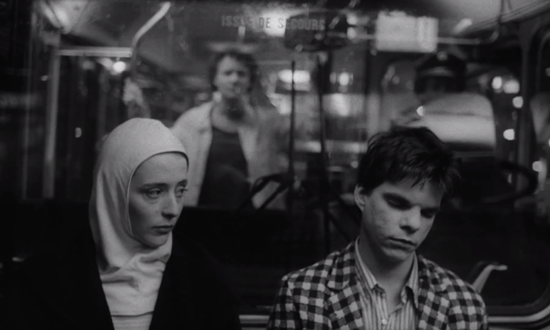 Leos Carax's debut film from 1984, Boy Meets Girl, feels simultaneously of its time and utterly timeless. Shot in luminous black-and-white by Jean-Yves Escoffier (Good Will Hunting) and sporting a bleak sense of humor, this rumination on romance can't help but call to mind Jim Jarmusch's similarly deadpan and color-free Stranger Than Paradise, which came out the same year, or Aki Kaurismäki's later La Vie De Bohème. But the echoes don't stop there. With its blend of poetry, blatant artificiality, and formal experimentation, it is clear that Boy Meets Girl is heavily influenced by three of French cinema's biggest Jeans: Jean Vigo, Jean Cocteau, and Jean-Luc Godard. There even seems to be a hint of influence from David Lynch's Eraserhead in the often surrealistic sound design.

And yet, in the midst of all these influences and references, Boy Meets Girl feels like an intensely personal story of heartache. It's probably no coincidence that the main character's name is Alex, which is the writer-director's real name (Leos Carax is an anagram of his first and middle names, "Alex Oscar"), and no coincidence either that Denis Lavant, who bears some physical resemblance to the director, was cast in that lead role.

The story of Boy Meets Girl is fairly simple. Alex is an aspiring filmmaker whose girlfriend has just left him for his best friend. Wandering the streets of Paris, listening to David Bowie's first album on a giant tape player with giant headphones, Alex is haunted by happy loving couples -- he throws change at one smooching duo, as though they were street performers -- until he happens upon a couple having a breakdown through the call box of their apartment building. On the street, Bernard (Elie Poicard) unloads his disappointments about the relationship into the tiny speaker while tap dancer Mireille (Mireille Perrier) sits upstairs in the apartment staring at the phone receiver. The Dead Kennedys' "Holiday in Cambodia" plays on a nearby stereo, saying all that needs to be said. Alex becomes more than a little fascinated with this unseen woman upstairs -- when he's not plotting to wreak vengeance upon his ex or, failing that, to reconcile with her.

Later, Alex crashes a party that he knows Mireille is attending. Carax peoples the event with lonely romantics, like an American astronaut who doesn't know French well enough to hit on the woman in front of him and a forlorn pianist, who plays a sonata he claims he just newly wrote for Mireille as she passes by. She goes into the bathroom and ponders slashing her wrist with scissors, but just ends up giving herself a Passion of Joan of Arc-style haircut. A deaf man tells Alex through an interpreter that young people don't talk to each other enough.

The party section of the film culminates in a nearly twenty minute sequence where Alex and Mireille are alone in the kitchen, drinking tea and talking about their desires. The sequence has a definite electricity, even if it is paced languorously. At first, it seems like this will be a pleasant resolution of everything that came before, and the damaged lovers might manage to heal their hearts together. Yet, while Boy Meets Girl is unabashedly romantic, it is also fairly cynical and not interested in easy Hollywood endings. Both Alex and Mireille make mistakes, and the ending isn't pretty. It'd be tempting to categorize the story as tragic, but that's too grand: it's more like youthfully pessimistic.

Still, Boy Meets Girl should not be judged solely on its story. After the house lights have come back up (or, the Blu-ray menu has reappeared), what lingers about the film is its series of oddly memorable, ravishingly shot moments. This is an art film in the best sense of the term. Nearly every frame of film could be isolated, blown up, and stuck on a gallery wall. Lavant and Perrier have a charming naïveté that suits their characters and makes them sometimes feel like fresh pieces of clay that Carax is able to mold, in hopes of achieving a greater effect, through meticulously choreographed physical action in tandem with the camera.

Is Boy Meets Girl pretentious? Yeah sure, it's a first film by a 23-year-old French guy. What else would you expect? It's also chock full of the kind of unabashed love for the history and culture of film that it makes a cinephilic viewer feel an innate kinship with the director. I never thought I'd say this, but maybe the world needs more pretentious 23-year-old French guys.

The Video:
Gorgeous, just gorgeous. Carlotta Films' AVC-encoded 1080p 1.66:1 presentation is spotless, with no dirt or damage. The clarity is jaw-dropping. There are no significant digital problems, and the original film grain structure is intact. Many of the shots feature low-key lighting, so the shadow detail drops off intentionally. But when it's supposed to be there, this transfer offers perfect nuance and subtlety. This and the disc for Leos Carax's Mauvais Sang are two of the best-looking Blu-rays I've had the pleasure of watching.

The Audio:
Though it doesn't come in a showy surround mix, the DTS-HD MA French mono audio (with optional English subtitles) sounds fantastic. As I mentioned above, the film has a somewhat surrealistic, carefully crafted sound design, and the restoration work that has been done here makes sure that no technical flaws or damage distract from the atmospheric soundscape.

(HD upconverted from SD, 8:08) - Video footage of Lavant listening on headphones to the early David Bowie orchestral pop song "When I Live My Dream," on repeat, while discussing his general thoughts and impressions of the script and his character. After the first repeat, he seems to genuinely get swept up in the sentiment of the song. This is a fascinating little morsel of video.

Final Thoughts:
For fans of early '80s indie and foreign cinema, this is a must-own. Considering the outstanding A/V quality and appropriately arty extras, I'm tempted to include this disc in the DVD Talk Collector Series. I worry, though, that it's still a bit too slow and weird to suit all tastes, so I'll stick with Highly Recommended. 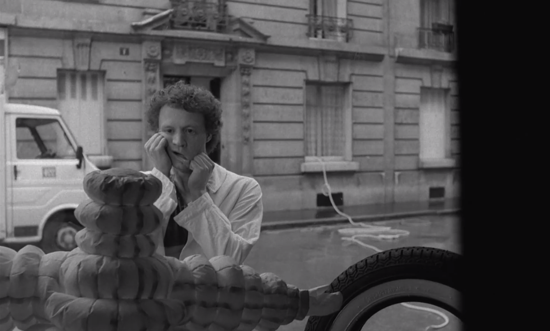