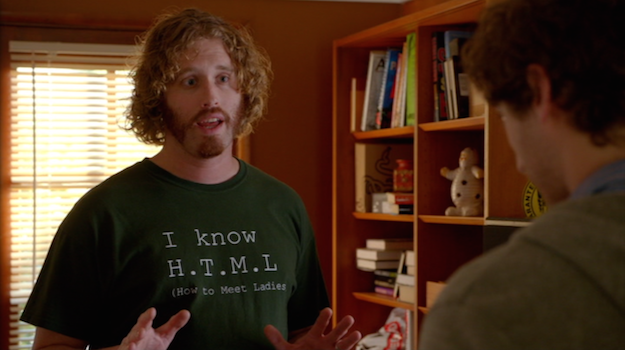 The first season of HBO's Silicon Valley is an example of the modern sitcom at its absolute best. The acting is smart and subtle, the plotting is swift and satisfying, and the jokes run the gamut from sly to silly without sacrificing the reality that the show has created. The show's co-creator, Mike Judge, conjures a corporate sphere similar to the ones he skewered before in Office Space and Extract, but while those movies felt like great ideas haphazardly executed (I feel the ire of Office Space fans rising, but come on, guys, it's hard to deny that that movie falls apart in the last half-hour), Judge and his collaborators have really stuck the landing on this one.

An ensemble of increasingly familiar character actors headline the show as a band of computer programmers living together in Palo Alto, California, in the hopes of launching the next major tech company. Thomas Middleditch is Richard, a lowly coder at Hooli (think Google, it's basically Google) whose fortunes change abruptly once it is revealed that he has hit upon an algorithm that can compress files smaller than ever with no perceptible loss of quality. T.J. Miller (Transformers 4) plays Erlich, a brash former tech guy who runs his house as an incubator for coders like Richard to conceive their new apps. Kumail Nanjiani, Martin Starr, and Josh Brener are the other coders in the incubator who decide to set aside their own fledgling projects to join Richard's start-up, after a sudden bidding war leads Richard to take seed money from seemingly on-the-spectrum tech giant Peter Gregory (the brilliant Christopher Evan Welch) instead of just selling out the idea for immediate millions to his self-aggrandizing boss at Hooli, Gavin Belson (Matt Ross).

Though Richard has hit upon an idea that could revolutionize the entire tech industry, the first season demonstrates that this fact is not so much a triumph as the source of all the troubles to come. Richard suddenly has to act like a businessman. When Peter Gregory asks to see the business plan for Richard's company, Pied Piper, the poor lost coder goes to Wikipedia to figure out what exactly a business plan is. When it becomes apparent that his best bud Big Head (Brener) doesn't have enough talent to stay in the house and be a part of Pied Piper, Richard wrestles with if and how to fire him. And, most daunting, Richard finds out that his old employer Gavin Belson is using his top techs to reverse-engineer their own version of Pied Piper and get it to market first, so that Richard and his backer, Peter Gregory, will be publicly humiliated.

Richard is not completely lost, though. Zach Woods plays Jared, a former assistant to Gavin Belson who decides to jump ship from Hooli to help Richard get his work off the ground. Slobby Erlich immediately rebels because he feels his importance as a consultant to the company being usurped, and the others bristle at Jared's attempts to professionalize their operation; they eventually accept him as a necessary evil. Also, Amanda Crew appears as the rare female presence on the show, Monica, Peter Gregory's assistant who wants Richard and Pied Piper to succeed.

In his Blu-ray review for this season, my DVD Talk colleague Francis Rizzo III called Silicon Valley, "the smarter, funnier The Big Bang Theory." That kind of nails it. The show presents a bunch of familiar computer nerd "types" living and working together but gives them believable dimension and rarely resorts to the easiest jokes. Middleditch's Richard is a swirl of confusion and passive-aggression, mumbling and fidgeting in a way that makes a character with whom he is negotiating take pity on him because he thinks Richard is mentally impaired. When the company's incorporation is held up because one of the founders is found to be not a legal citizen, the immediate assumption we're left to make is that it must be Nanjiani's Pakistan-born Dinesh, but the joke is that it's actually Starr's deadpan smartass Canadian Satanist Gilfoyle, who then, in a cleverly inserted detail, manages to become naturalized in a fraction of the time it took Dinesh. In fact, the entire Dinesh-Gilfoyle dynamic is beautifully realized, because these two guys are constantly competing and bickering among themselves, but they smoothly transition into a team whenever there is someone else in the house to oppose. Miller's Erlich is overbearing and self-satisfied, but the show gives him plenty of nice moments to prove that he has a bit of legitimate know-how to compensate. Woods's Jared is a seemingly humorless corporate drone, but a late-season character arc sends him hilariously and touchingly off the deep end.

The standout performance, in a season full of strong work, belongs to the late Christopher Evan Welch, who sadly died of lung cancer during production and does not appear in the last few episodes of the season. His realization of the off-center Peter Gregory is undeniably unique, playing as uncannily real and also somehow alien. After Peter asks his assistant to buy one of everything off of the Burger King menu, so he can better understand the company's seeming popularity, the way in which the character then studies the dozens of cold sandwiches assembled on his desk is like a scientist examining an unidentified culture under a powerful microscope. This isn't mundane fast food, despite what his uncomprehending underlings might think: this is the source of a potential breakthrough.

With the show's second season already begun on HBO, we can only hope that the creative team behind the show continues to uncover more of what makes their characters unique and appealing as they head toward tech-world domination or bust. 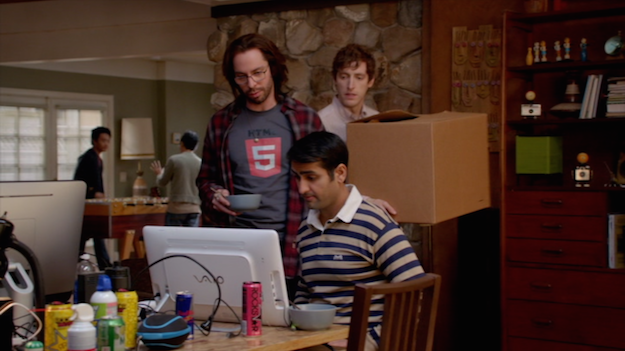 The DVD
Silicon Valley: The Complete First Season is presented on 2 DVDs, housed in a standard-size keepcase.

The Video:
Except for a few scattered bits of blockiness -- especially during the busy opening title animation -- this widescreen 1.77:1 transfer is pretty much perfect for a standard-def presentation. Colors and contrast are solid. Details are relatively crisp.

The Audio:
The main English Dolby 5.1 surround mix is great. Like most sitcoms, the show is pretty talky, and the dialogue here sounds consistently clean and present. The surround channels mostly get a workout during the sporadic music cues, which sound bright and energetic. The disc also offers French Dolby 5.1 surround and Latin Spanish Dolby 2.0 stereo audio options, plus English, French, Spanish, Portuguese, and Thai subtitles, in addition to closed captioning.

- Though these commentaries are not mentioned on the packaging for this DVD, they are easily the best bonuses on the disc. Mike Judge invites a rotating panel of commentators that includes fellow writer and director on the show Alec Berg (Seinfeld, Curb Your Enthusiasm), as well as the five main actors: Middleditch, Miller, Nanjiani, Starr, and Woods. There are a few dead spots over the nearly four hours of commentary, but mostly it's wall-to-wall joking and entertaining chat, often discussing what happened during the shooting of each scene or revealing the real-life inspirations for many of the moments in each episode. Starr was apparently chiming in via satellite and the absolute final moment of this season's commentary is a hilariously horrifying mismatch of Starr's delayed audio and what appears onscreen.

Final Thoughts:
HBO has another winner with Mike Judge and Co.'s note-perfect tech nerd comedy. The wonderful cast has winning cheminstry and they are well-matched to the thoughtfully silly material. I'm excited to see how the currently-airing season 2 further develops the story, but if you're wondering if it's worth going back and catching up, these first episodes come Highly Recommended. 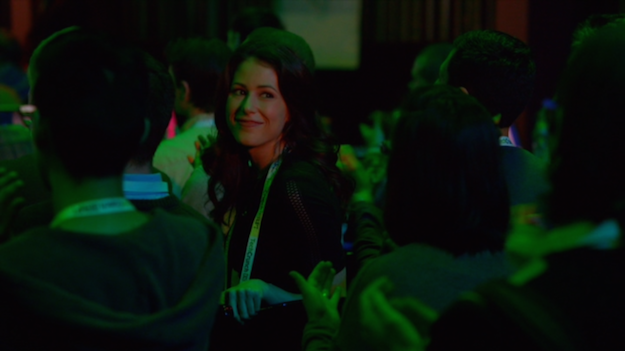