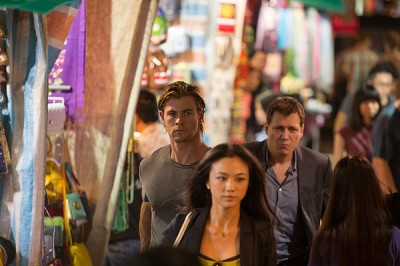 Forgive me if during this review I fall asleep at random intervals, but Blackhat was so deadly dull that the very prospect of reliving it for the next several hundred words is already making me a little drowsy.

The quick rundown: Blackhat is the latest in that quasi-genre of "cyberthriller." Namely, a mystery-type action-sorta movie about guys playing cat and mouse online before presumably someone gets punched in the nose IRL. In this case, a hacker wormed his way into a Chinese nuclear power plant and shut down one of the reactors and nearly caused a meltdown, while simultaneously driving up the price for soy and earning himself a small fortune. The feds in both China and the U.S. put their heads together to try to figure out who did it and why. Are these seemingly unrelated acts actually connected somehow? (Answer: not really, but kind of.)

The team leader on the Chinese side (Leehom Wang, Lust, Caution) thinks he recognizes part of the code as being a modification of a hacking program he co-wrote with his college roommate, an incredibly handsome and impossibly cut hacker currently serving more than a decade in prison for cybercrimes all his own. To catch the bad guy, they need a bad guy, and so Nicholas Hathaway (Chris Hemsworth, Sexiest Thor Alive) is offered a deal: catch the blackhat (computer jargon!) that nearly blew up China and he'll go free. Right on! The rebel is now working for the man!

Cue international chase sequences. And by "international chase" I mean going to another country and typing on keyboards and swapping USB thumbdrives around. And occasionally being threatened by thugs so that Nicholas can reveal he's not only a skilled hand-to-hand combatant, but a particularly brutal one. In slow motion, too. Because this is a Michael Mann. 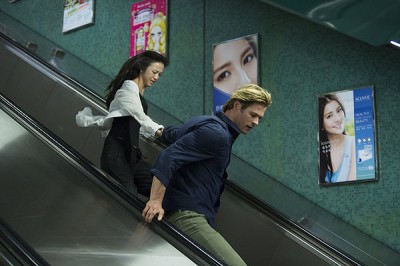 For those who don't know, Michael Mann is the film fetishist's film fetishist. He makes things look all pretty and neon. In his world, lights are blue and men look like they need a shower but yet never seem to sweat. You know, like in Miami Vice, a movie that looks the way Colin Farrell's clothes smell after a bender. Honestly, I think it was around Vice, which was released in 2006, that Mann stopped caring about pleasing his audience and began a fairly steady climb up his own ass. Was it because we didn't give enough attention to Ali? Vice was structureless and too cool for school, and its follow-up, Public Enemies, was long and meandering, the director spending more time on the 1930s details than he did shaping his story.

Six years later and Mann is now somewhere in a wilderness of his own devising. How else do you explain a movie that opens with several minutes shot from inside a computer. And no, not inside a computer looking out, but inside a computer and looking around, following the electrical impulses and zeroes and ones across the information super highway like its an extended credits sequence of an X-Men film. Instead of Wolverine on the other end, though, we just get a languid plot about people taunting each other through e-mail, stealing millions with the flick of the finger, and the occasional melodramatic shootout. Plus the most unsexy sex scene possible. Hemsworth and his lady friend's first time has all the perfunctory humping of a loveless marriage. For a guy that just got of prison, Nicholas Hathaway sure doesn't seem very eager to make up for lost time.

You have to pity poor Chris Hemsworth, actually. He looks like he's trying really hard and taking all of this talk of intrigue and data very seriously, but so serious that he appears silly. While the rest of the cast--which also includes Viola Davis as the Department of Justice liaison overseeing the operation--kind of gets with the lazy groove, Hemsworth wears the constant expression of a man reminding himself to make sure he's thinking. Because he's supposed to be smart. Gotta look smart. There should be a cutaway to the inside of his skull and Winnie the Pooh in there tapping on his fuzzy head and saying, "Think, think, think."

Meanwhile, Mann is over in the corner fiddling with his camera and getting the lighting just right, and Mogan Davis Foehl, the first-time scribe credited with the screenplay, sits in a chair behind him with a little card stuck in his hatband that says "WRITER" feverishly deleting all the emotional tension out of an old Alan J. Pakula script while studio execs back in Hollywood dig through the calendar to see when the next Kevin Hart movie is going to be released so they can position Blackhat next to it and blame America's seemingly bottomless love for Hart on the inevitably poor ticket sales. Because that's how you counterprogram a turkey, folks!

Wow, here I thought I was going to get bored and all I've succeeded in doing is riling myself up. Ooops. Writing mean reviews is like drinking an entire pot of coffee. Now I'm going to be up all night! Maybe I should call one of my male friends who loves Miami Vice and have them explain to me why until I drift off to Slumberland. That stuff's like verbal Ambien.

The race for the worst film of 2015 begins now. Your move, Mortdecai! 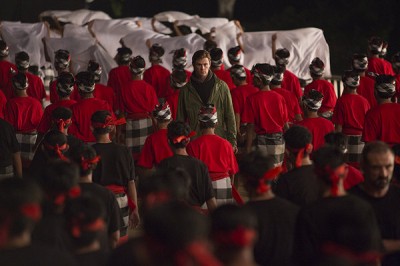