Please Note: The stills used here are taken from the previous standard-definition DVD release, not the Blu-ray edition under review. 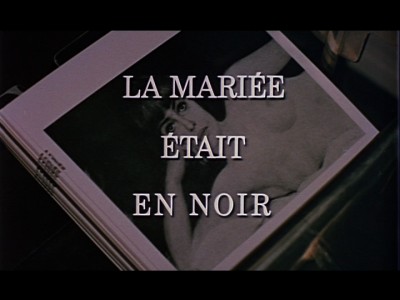 In 1962, French-director Francois Truffaut sat down for a series of extended interviews with Alfred Hitchcock, later published as the essential tome Hitchcock/Truffaut. In 1968, Truffaut set out to pay tribute to his hero by making Hitch's kind of movie, adapting a novel from crime writer Cornell Woolrich (I Wake Up Screaming, Rear Window) and hiring legendary composer Bernard Herrmann (Psycho, Taxi Driver) to lend his sweeping melodies to a thriller about a woman seeking revenge.

The film that came out of it, The Bride Wore Black, is more than a Hitchcock pastiche, however; it's something uniquely Truffaut, a bit oblique, with mysteries that extend beyond the riddles of the plot. Truffaut teases us with the violence, letting it mostly take place offscreen, using suggestive cuts to give the movie a dream-like quality. If it weren't for the clarity of its heroine, we might wonder if any of it really happens at all.

Jeanne Moreau (Jules and Jim) stars as Julie, the bride whose husband, we will come to find, was shot on the church steps just after their wedding ceremony. How this came to be is part of the mystery, the suppression of that information burying a bit of a whodunit within the revenge thriller. In fact, The Bride Wore Black begins with little preamble. Julie is on her mission, stalking the first of the five men responsible for killing her groom. As she tracks each of her marks, the way she gets close to them is presented as a kind of mini drama within the larger narrative. Each "victim" represents a certain unctuous personality, varieties of ladies men ranging from the married cad to the pathetic dreamer lusting after pin-up girls. Their deaths match their types: the cocky lothario pushed from a great height, the gregarious politician suffocated in a tiny cupboard, the skeevy painter shot down by his artistic ideal. 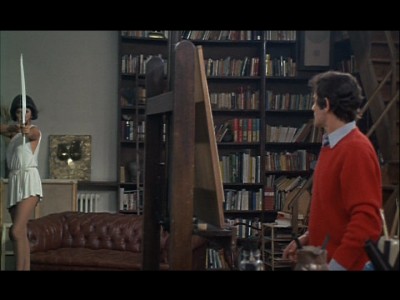 Truffaut is cagey as a storyteller here. He hints at a grand design, but really, the joy of The Bride Wore Black is the simplicity of Julie's dogged determination. The plotting is slight, but it doesn't matter. In a way, the film plays as an extended tribute to its star. The men in the movie are all immediately taken with Julie, and they all lust for her. She toys with their desires, though she really doesn't have to do much. Such is the allure of Jeanne Moreau that this is particularly easy to accept. Wearing different wigs and costumes depending on who she is after, the character's adaptability also plays off the interests of her audience. The murder weapon here is the male gaze, as we watch with the same drooling, slack-jawed awe as the unsuspecting bad guys. Moreau is particularly stoic when facing her targets. Her vulnerability only comes through when they can't see her. Her tearful confession when she's trapped one of them, the deep breaths when changing in the artist's bathroom--we see her take pause, but they never do. And this is why we remain on her side. 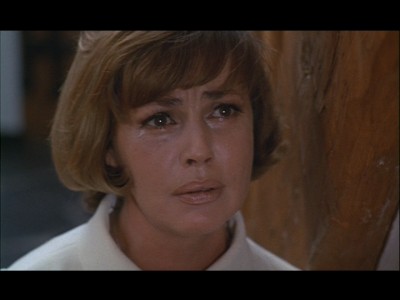 The Bride Wore Black returned to prominence a decade ago when Quentin Tarantino cited it as a major influence on the Kill Bill movies. Uma Thurman's character, the Bride, widowed on the altar, with her list of names, an agenda of vengeance--it all starts here with Moreau and Truffaut. Where Tarantino is big and bloody, though, Truffaut is small and intimate. There is an undercurrent of sadness that is nowhere to be found in Kill Bill. The update is more akin to Scorsese's Cape Fear redo, going violent where the original is suggestive. Neither is more right or better, just different...but The Bride Wore Black is maybe deeper, more heartfelt, doing more with far less.

And that ending! Tarantino must look at it and eat his heart out. 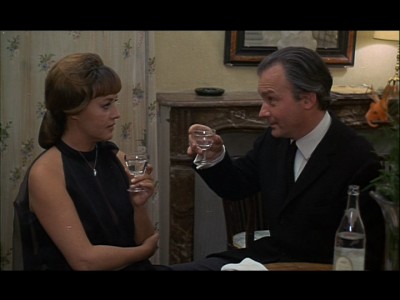 Video:
Twilight Time releases The Bride Wore Black as a limited edition Blu-ray (3,000 copies), with a widescreen (1.66:1) 1080p transfer. For the most part, it looks wonderful. There are some hazy scenes here and there where the grain overtakes the image and the resolution looks soft, but overall, the representation of the late 1960s film stock looks excellent, with nice pastel-like colors and an impressive clarity.

Sound:
As with most Twilight Time releases, there are several audio tracks to choose from, with the major French soundtrack being remixed for DTS-HD Master Audio in its original mono. The sound is very good, with no harsh tones or distortion. For fans who might want it, the English-language dub is included; a short sampling reveals it sounds very good, as well.

You can also listen to a track that isolates Bernard Herrmann's musical score and the sound effects.

The English subtitles are not optional on the French track. They are a little odd, with weird < > symbols used at different times, either for emphasis or sometimes to indicate someone is speaking off-screen. Once you get used to that, it's fine, and the yellow titles are easy to read and well written.

Extras:
The Bride Wore Black is released in a standard Blu-ray case with an interior booklet featuring art and liner notes. In addition to the audio options listed above, there is also a full-length commentary with historians Julie Kirgo, Steven C. Smith, and Nick Redman.

The original theatrical trailer is also on the disc.

In addition to that, there is a bonus CD featuring a 79-minute interview with Bernard Herrmann.

FINAL THOUGHTS:
Highly Recommended. The Bride Wore Black, Francois Truffaut's homage to Alfred Hitchcock, is a nicely rendered crime thriller, providing a perfect vehicle for star Jeanne Moreau to subvert her cinematic image while also just being good fun. The story of revenge is coy with the violence, but its underlying emotions make for a wickedly dark film with a plenty more to offer than just a trail of bodies. 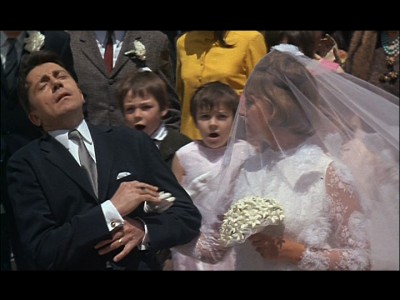