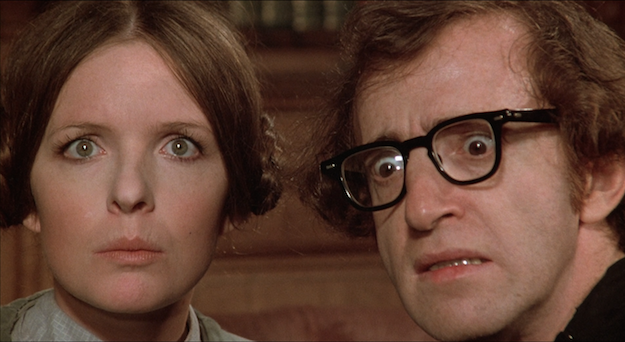 1975's Love and Death is probably the oddest film of Woody Allen's "early funny ones," but, pound for pound, it is also probably the funniest. Set in Russia during the Napoleonic Wars, Love and Death features a smorgasbord of smarty-pants riffs on philosophy, literature, and cinema, Marxian (as in Groucho) double-talk, and slapstick setpieces that rival the work of the silent greats. The gags-per-minute rate is off the charts and an astonishing amount of the jokes deliver, even after numerous repeat viewings.

Boris and Sonja (Allen and Diane Keaton) are cousins who have long had an intellectual connection -- their first scene together contains a long discussion regarding the existence of God -- but Boris has yearned for years to be with Sonja romantically. It turns out, however, that she has been nursing a crush for one of Boris's handsome, brain-dead brothers. The arrival of war splits apart the family, sending cowardly "pacifist" Boris to the front lines and forcing Sonja to acquiesce to the marriage proposal of an old herring merchant.

The scenes of Boris in army training and later in battle are probably the funniest slapstick take on warfare since Chaplin's Shoulder Arms, full of ingenious anachronisms (Frank Adu's tough-nosed black drill sergeant) and gleeful absurdities (Boris dressed as a cheerleader, whooping it up from the sidelines while the battle rages on).

Meanwhile, Sonja has numerous extramarital dalliances that inadvertently become instrumental in the death of her husband. Boris also keeps busy, seducing the gorgeous and glamorous Countess Alexandrovna (Olga Georges-Picot, Successive Slidings of Pleasure). The countess's lover, played by the ever-excellent Harold Gould, is enraged when he finds out and challenges Boris to a duel. Out of pity for her doomed cousin, Sonja agrees to marry Boris if he makes it out alive. Much to everyone's surprise, he does, so Sonja is forced to follow through on her promise.

Any description of Love and Death that sticks largely to the plot is going to be providing a disservice. As Roger Ebert wrote in his 1975 review of this film: "The best parts of Love and Death shouldn't, of course, be revealed here. Comedy's hard to review for that reason. You don't want to give away the laughs and yet you're left with little else to talk about." Even more than most typical comedies, Love and Death is truly a collection of hilarious moments. The plot, though not utterly arbitrary, is still often secondary to the laughs. After all, when the movie shifts its focus in the final third to a half-cocked attempt by Boris and Sonja to assassinate Napoleon, no viewer is likely to get upset that the story has suddenly become too far-fetched.

Allen and Keaton make a formidable comedy team, and Love and Death shows off both their warm, sweet, romantic interplay and their deftness with snappy, shticky banter. In certain moments without Allen, Keaton even seems to have picked up her partner's speech cadences -- although honestly they could just both be aping Bob Hope.

As ever, Allen showed good taste in his collaborators off screen as well. The film was shot by Ghislain Cloquet, who previously worked as cinematographer for a number of French heavy hitters like Alain Resnais, Louis Malle, Robert Bresson, and Jacques Demy. Cloquet manages to capture the grandeur of the Old World locations without trampling on the humor. Editor Ralph Rosenblum, who cut The Producers in addition to most of Allen's '70s work, knows when to hold for a laugh but never lets the film bog down, maintaining a consistently zippy pace throughout.

Woody Allen's next film after Love and Death would be his Oscar-winning romance Annie Hall, which effectively signaled the end of his "anything goes" era. From here on out, Allen would largely produce real-world relationship stories, sometimes augmented by magical realism or genre experimentation. I don't mean to disparage the many good and great movies that Allen made later, but it's a slight bummer that he never again attempted the giddy madcap brilliance captured here. 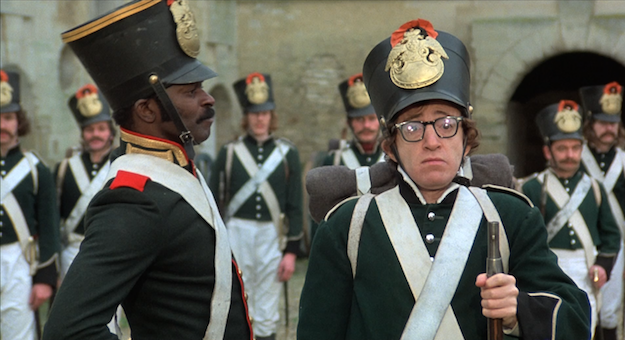 The Blu-ray
Love and Death comes in a limited edition of 3000 copies. A color booklet, featuring an essay by Twilight Time's Julie Kirgo that heavily quotes jokes from the film (further proving Ebert's point), is included.

The Video:
I own the old MGM DVD of Love and Death and originally wanted to compare it to this new Blu-ray, but unfortunately, I have the old disc stashed away in storage. Fortunately, Gary Tooze over at DVD Beaver has already posted a helpful comparison of the old transfer and the new AVC-encoded 1080p 1.85:1 transfer of the film. Clearly, the amount of detail in the new HD version is a stark improvement. Also, the image is brighter, with more nuanced contrast, and the color looks cooler and more lifelike, whereas on the old DVD skintones appeared excessively pink. The only drawback I noticed, that DVD Beaver skips over, is that there are numerous sections of the film where dirt and white flecks show up. It's not enough of a distraction to discount the entire presentation, but it is certainly perceptible without very much effort.

The Audio:
The DTS-HD MA mono audio is satisfyingly full and robust. The many music cues composed by Sergei Prokofiev, especially the oft-reprised "Troika" from Lieutenant Kijé, conveys the simultaneously buoyant and tragically absurd spirit of the film. The disc offers one subtitle option: English SDH.

- Oddly, most of the moments in this film with significant music cues occur without dialogue, so this no-talking track mostly just replicates the audio of the normal soundtrack during these moments. 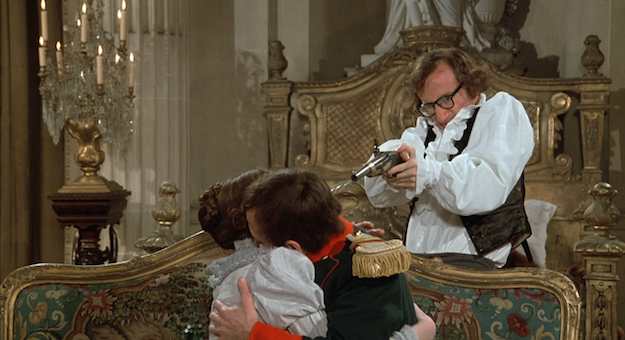