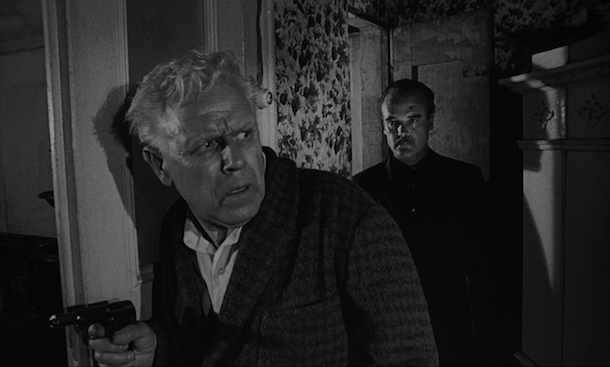 Arrow Video uncovers another fascinating chunk of exploitation movie history, with their new 2-Blu-ray set based around the 1966 horror flick Blood Bath. Produced by Roger Corman (whose name can be found nowhere in the credits), this film originally ran as part of a double-bill with Queen of Blood, a film that, like Blood Bath, is a mishmash of footage from an obscure Eastern European production and newly shot American material. The Arrow set not only includes the original edit of Blood Bath's Yugoslavian source film, Operation Titian, there is also Corman's slightly less irreverent re-edit of Titian for TV broadcast, Portrait in Terror, and the hilariously padded-out TV version of Blood Bath, known as Track of the Vampire. That's four films that share a lot of the same footage, but little of the same sensibilities.

The set goes in chronological order, starting off with Operation Titian. Considering the direction in which this material is eventually taken, it's surprising to note that this original film is not a horror film but is essentially a mystery with the flavor of a spy movie. Directed by Rados Novakovic, the film is mostly concerned with the murder of an old man and the theft of his knock-off art masterpiece. Detective/master fisherman Miha (Rade Markovic) pursues the case, with the help of his future brother-in-law Dzoni (Miha Baloh), while his visiting sister Vera (Irena Prosen) is pursued by a creepy ex-lover (and the nephew of the dead man), Toni (William Campbell). Meanwhile, a mysterious Italian man, Mauricio Zaroni (played by the not-at-all-Italian Patrick Magee), lurks around the nearby resort and has a fling with a local striptease artist. Campbell and Magee were fresh off the Corman-produced, Francis Ford Coppola-directed Dementia 13, and Coppola was sent by Corman to Yugoslavia to oversee what became a very not-intensive four-month shoot. The resulting film is uneven and flabby -- with a lot of unnecessary travelogue moments, such as a long digression to a fishing competition during the murder investigation -- but it offers a surprising amount of effective scenes to compliment its MST3K-ready moments of idiocy.

This is why the shorter runtime of the slightly re-dubbed and re-edited Portrait in Terror is initially heartening. Corman's editors found a way to trim a lot of flab from Operation Titian and focus on what works. Somehow, though, the film must have been deemed too short, because two overlong, momentum-killing, suspense-thwarting sequences -- featuring Plan 9 from Outer Space-quality stand-ins -- have been unnecessarily added to the film. A murder scene, which was executed with artful restraint and suggestion in Operation Titian, is here artlessly extended to include not only the complete act but also the suspense-free aftermath, in which our murderer (clearly not resembling the original actor) takes the corpse down a long staircase and out to a boat, then rows out to sea and dumps the body. What's most puzzling is that in the original footage, the killer is wearing sunglasses, but the re-shoot crew didn't even spring for this little accessory that might have made it a touch harder to figure out the killer was now being played by some rando. At least the corpse had the good sense to try to hide her face behind her wig hair. The other extraneous sequence is a long underwater swim that ends in the discovery of the dead body by unrelated characters, only to be followed with the original film's underwater sequence, where the body is discovered by Miha. However, it must be said the awfulness of these new sequences is really something to savor for cheesy movie fans. 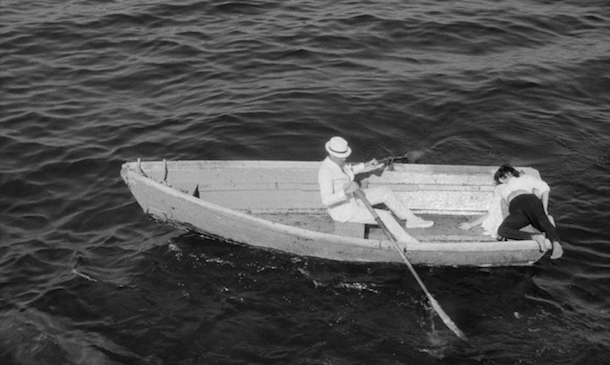 The second disc in the set begins with our title feature, Blood Bath, which is probably the best film here. However, thanks to its convoluted production history, Blood Bath is no less muddled than any of the other flicks in the set. Corman brought in Jack Hill (Spider Baby) to create a marketable horror film, utilizing at least a half-hour of Operation Titian in the process. Hill decided to riff on Corman's own A Bucket of Blood and relocate the action to a bohemian art scene, where William Campbell (who was actually brought in to do new scenes) is now an insane artist who kills his subjects as he paints them and then dips them in wax afterward (this detail is inspired by a climactic image shown in Operation Titian). Petticoat Junction's Lori Saunders (credited with her real first name, Linda) is a modern dancer who wants to get close to Campbell, but he keeps her away, hoping to protect her from himself. Jack Hill's frequent collaborator Sid Haig and Dementia 13's Karl Schanzer also appear as freaky beatnik artists on the scene. Hill left the production after finishing a rough cut, and Corman put Stephanie Rothman (The Velvet Vampire) on the project. Rothman removed all but four scattered minutes of Operation Titian from the film, and added nearly a half-hour of her own material, turning Campbell's character into a shape-shifting vampire (since Campbell wouldn't come back for another round of reshoots). If Hill's conceit that Campbell's character is both killing his subjects for the sake of his paintings and then dipping them in wax (just because?) strains credulity, then Rothman's additional shape-shifting vampire conceit makes the character so unnecessarily elaborate that he becomes straight-up unbelievable.

This gets even more ridiculous in Track of the Vampire, which was cobbled together because Blood Bath's 62-minute running time was too short to fit in a 90-minute TV time slot. A whole batch of scenes with Patrick Magee from Operation Titian are plunked into the middle of the film, badly re-dubbed to transform his character into a jealous husband who thinks his stripteaser wife is having an affair with Campbell's character. Then, added to this, is a horribly padded eight-minute chase, in which another Plan 9 stand-in unconvincingly pretends to be Campbell's vampire iteration, chasing a woman in broad daylight (!!), eventually forcing her into the sea, stripping her of her dress, and then finally sinking in his fangs. Track of the Vampire's cheesy-movie coup de grâce is an added five-minute scene of a woman who looks nothing like Lori Saunders, dancing awkwardly on the beach, with a few mock-kaleidoscope effects placed over the camera lens here and there. At this point, TV viewers presumably left the room to make a sandwich or finally gave in and fell asleep.

By the time we get to Track of the Vampire, this project has been in the hands of at least three directors -- and maybe as many as five or six -- plus who knows how many teams of editors. From the evidence here, the best version of the project is probably the one that never saw the light of day: Jack Hill's original Blood Bath. Certainly in the completed Blood Bath, his footage far outstrips Stephanie Rothman's for craftsmanship, humor, and suspense. And considering that there probably is at least a half-hour of good footage in Operation Titian, I'd be willing to bet Hill's version worked better than the incoherent thingamajig that saw release.

Still, it must be said that, even though there is not a wholly satisfying single film in this Blood Bath collection, it is an illuminating and oddly rewarding experience to track the strange mutation and dilution of its various creators' intentions over the course of these four films. As such, this set would make an extremely worthy addition to any B-movie fan's collection. 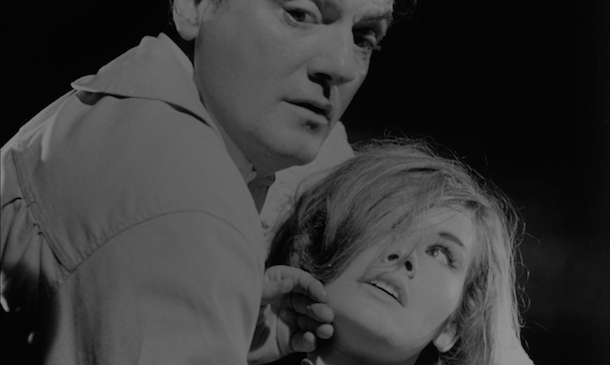 The Blu-ray
Blood Bath is a 2-disc set, secured in a standard plastic case that is housed inside a cardboard sleeve and accompanied by a double-sided fold-out poster and a booklet featuring a handful of essays on the films and the people involved.

The Video:
As usual, Arrow does an excellent job with the materials they have, although in the case of these four films, those materials are not totally optimal. All four films come in AVC-encoded 1080p 1.66:1 transfers, with a healthy grain structure and a typically high level of detail. The Operation Titian presentation suffers the most, however, since it seems to be cobbled together from the Portrait of Terror print, a few cutaways from Track of the Vampire, and a standard-def video copy to fill all the remaining gaps. Portrait of Terror has the least problems throughout. Blood Bath has sporadic quality issues, especially during the conclusion. Track of the Vampire has many sections that look "dupe-y" (for obvious reasons) and the newly added sequences (especially the underwater killing) feature some noticeable unrepaired damage.

The Audio:
All films feature LPCM mono audio. There are many predictable era-related flaws and limitations apparent throughout all four of these low-budget films (almost all the dialogue is dubbed in the Operation Titian footage, meaning that out-of-sync rubber lips abound), but the only flaw that really bugged me is the persistent hissing "S"s in Operation Titian. They are by no meanssssssss ssssssssubtle. The disc offers one subtitle option: English SDH.

Special Features:
All featurettes include a subtitle option for English SDH.

Final Thoughts:
This set is a fascinating illustration of how Roger Corman managed to squeeze three different products out of one Yugoslavian film he owned but didn't like. None of the films completely hold up on their own, but presented all together, along with Tim Lucas's fascinating visual essay, this set becomes strangely compelling and nearly essential. Highly Recommended. 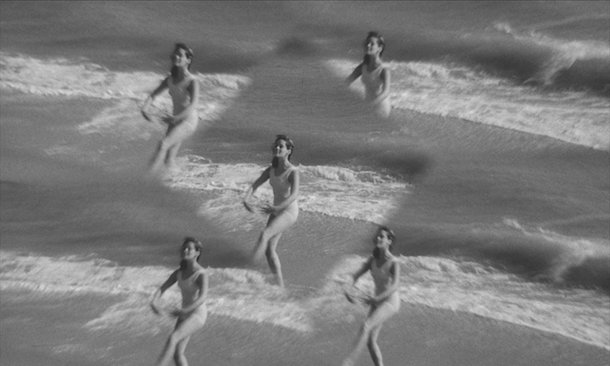 Track of the Vampire