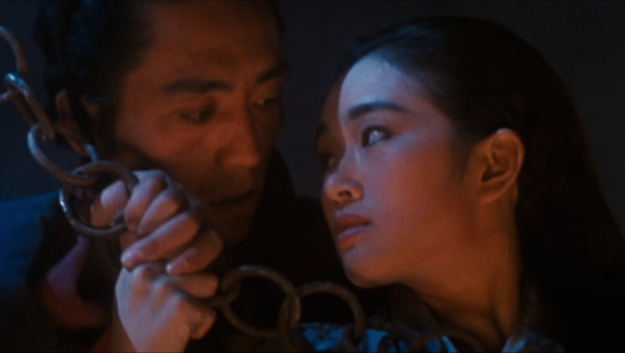 Warner Archive Collection's second wave of releases from Hong Kong's Golden Harvest studio has brought us a quite odd 1989 genre mishmash, A Terra-Cotta Warrior. Among the many notable people involved with the film, director Zhang Yimou (Hero, Coming Home) appears onscreen in a rare but assured lead performance opposite his frequent leading lady, Gong Li. Warrior director Ching Siu-Tung and producer Tsui Hark (who collaborated on the Chinese Ghost Story movies) have fashioned a bizarre product that ambitiously combines two distinctly different genres in telling its story. The overall attempt is admirable but unfortunately ambition only gets you so far, and the film ends up too disjointed for its own good.

The first forty minutes of the film (roughly the first third) make up the most conventional section of the story, but it is also the most effectively realized section. Zhang Yimou stars as Meng Tian Fong, an architect living in Qin Dynasty-era China who becomes the Lord Chamberlain after his expert swordsmanship thwarts an assassination attempt on the tyrannical Emperor (Lu Shuming). Tian Fong is loyal to his master, but he finds himself compelled to break his oath when he falls for beautiful, young, troubled Snowy (Gong Li). Snowy is supposed to be sent away to a far-off island, along with hundreds of other young virgins, as part of a vaguely defined expedition which is intended to procure the Emperor an immortality elixir. There is palpable chemistry between Zhang and Gong as the lovers, which makes Tian Fong's dilemma over whether to choose love or his duty extremely compelling. It's classic melodrama, executed with the perfect mix of passion and restraint.

After those first forty minutes, though, the film seems to lose track of that tonal consistency. It all begins with the revelation that one of the Emperor's alchemists actually has stumbled upon an elixir for immortality. Snowy steals it and gives it to Tian Fong, so that when the Emperor sentences our hero to death and has him sealed inside a terracotta statue, we can assume this is not the last we will see of him. Then the film flashes forward a few millennia to the 1930s. Gong Li resurfaces as a new character, Lili, whose broad ditziness signals the strange, new direction the film starts to take. Lili is an extra in a film intended to be the Chinese Gone With the Wind, but she is convinced she should be the star. She starts aggressively pursuing the film's "Clark Gable" (Yu Rongguang), only to discover him in the middle of a shady antiquities deal that leads to murder. Lili remains oblivious to her crush's malevolence, however, even after he takes her up in an airplane and bails out, leaving her to crash. Thanks to a newly instituted cartoon logic, Lili survives the crash and finds herself below ground in an old mausoleum, where she unwittingly wakes up Tian Fong and must now fend off his romantic advances. When Lili's murderous actor crush finds out about this revived 3000-year-old man, he decides to hunt for more treasure in that mausoleum.

In other words, what begins as a stately Crouching Tiger-type wuxia epic turns into a screwball adventure that hopes to resemble the Indiana Jones movies, but actually plays out closer to a less coherent version of those '00s-era Mummy movies. With a little bit of Mannequin thrown in for good measure.

Zhang actually weathers the tonal jump from brooding romantic lead to comic fish-out-of-water with aplumb. He invests a bevy of idiotic gags, like being handed a menu and confusing it for actual food, with more intelligence and craft than they deserve. Gong, on the other hand, can't seem to breathe the same kind of life into Lili, painting her as a grating, one-note cartoon character (although the dubbed voice performance certainly does her no favors either -- see below). Yu barely makes an impression as the baddie.

Despite spending too much of its running time frittering away most of the goodwill earned by its excellent opening section, A Terra-Cotta Warrior does manage to conclude with a satisfying, large-scale setpiece that merges the worlds of the 3rd century BC and the 1930s.

The DVD
A Terra-Cotta Warrior is presented on a manufactured-on-demand (MOD) DVD-R, courtesy of the Warner Archive Collection.

The Video:
The widescreen 2.40:1 transfer is a little more inconsistent than many of the films that have popped up in this Golden Harvest reissue series. There are frequent instances of dirt and scratches. The colors vacillate between anemic and more richly saturated. There are sporadic instances of digital noise and some of the night scenes show evidence of crushing in the blacks. It's certainly watchable, but not as well-preserved one might hope.

The Audio:
The disc offers three audio dubs in Dolby 2.0 mono: Cantonese, Mandarin, and English. The English dub sounds the worst, with less clarity than the Chinese tracks, but it is fortunately not augmented by ugly surface noise or other damage. Not speaking either native dialect, I found myself gravitating toward the Mandarin option, because the performances seemed more natural overall. However, the vocal performance of Lili is ten times more cartoon-y here than in the Cantonese version. All things considered, the broad, ditzy inflections of the Mandarin track probably fit Gong Li's one-dimensional performance better, but that doesn't change the fact that it is incredibly grating.

Once again, for a subtitle option, we get English SDH, which are just "dubtitles" of the English audio track, sometimes referencing sounds not even heard in the Chinese options. As with many of these Golden Harvest titles, whoever created the subtitle track goes overboard in referencing when music is playing or describing sounds connected to actions we can clearly see onscreen. It's not quite as overboard as the Pedicab Driver subs, but it's still mildly frustrating.

Final Thoughts:
Despite its long stretches of puzzling incoherence, fans of unusual genre flicks will probably want to check out A Terra-Cotta Warrior. With its understated romantic opening and its raucous Indiana Jones-style conclusion, there is not really another film quite like it. Director Zhang Yimou, in a rare acting appearance, is surprisingly deft at fighting, melodrama, and comedy. In the very least, the film certainly makes the case that Zhang could have had as interesting a career in front of the camera as he has had behind it. Recommended.