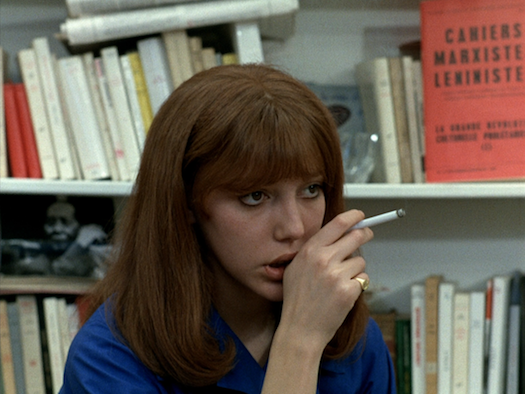 The 1967 film La Chinoise marks one of the first transitions (of many) in the career of Jean-Luc Godard. A darling of the French New Wave, Godard was always known for his formal and narrative experimentation. In the baker's dozen of feature films that Godard directed leading up to La Chinoise (in a span of 7 years, no less!), he revealed himself to be a hyper-literate intellectual with a sometimes prankish sense of humor. There was not a lack of politics in Godard's films up to this point, but they were not the hallmark that would define Godard's next decade or so of films.

La Chinoise was Godard's attempt to tear down his previous modes of filmmaking and rebuild them in ways that reflected the politicized atmosphere of French student culture.

As to that first count, he doesn't fully succeed in starting from scratch, since the film is full of Godard's established habits. Characters quote texts to each other, as though they were reading their university thesis papers. Title cards are interjected into the action, often with incomplete, punning phrases. Similarly, close-ups on printed texts and pieces of art (mostly pop art and ads, in this case) are thrown into the visual mix. As before, the action centers around a beautiful young woman that Godard happens to love in real life -- Anne Wiazemsky, replacing ex-wife and frequent muse Anna Karina -- so Godard's camera (well, cinematographer Raoul Coutard's camera) can't help but love her too.

On the second count, Godard does appear to effectively catch some of the Marxist-Leninist spirit that would lead to France's May 1968 riots and the movement that sprung from those. But, he can't totally repress his hip cynicism, making his onscreen characters often seem naive in their half-formed political convictions. (According to the supplemental commentary and interviews on Kino Lorber's Blu-ray, Godard's political opinions were essentially half-formed themselves at the time of filming, so maybe this cynicism is a kind of self-deprecating auto-critique.)

More important, perhaps, than whether or not Godard achieved his described aims is whether or not the film offers entertainment or edification fifty years later. And the honest answer to that is... somewhat. The casual film viewer doesn't need me to tell them to give La Chinoise a miss: they're already doing that anyway. But folks who are slightly farther up the cinephile continuum most likely won't get much out of La Chinoise either. With its series of rhetoric-heavy vignettes and only the vaguest hints of narrative and character, La Chinoise is really only for those who want to wrestle with it aesthetically, intellectually, and/or historically. It's a collage text for academic study and analysis much more than a movie.

The main cast is quite good: Wiazemsky as a trust fund kid who turns her family friend's upscale apartment into a squat for a burgeoning Maoist cell, Jean-Pierre Léaud as yet another filmmaker surrogate (Truffaut and Rivette have also used him for this purpose) who is becoming infatuated with the idealism of Marxist Leninism, Juliet Berto as a proletarian sometime-prostitute who has been swept up in the revolutionary fervor, and Michel Semeniako as a relative skeptic who doesn't believe the others fully grasp what real-world revolution actually entails.

Those character descriptions are more dramatic than the film is. Rather than acting out the traits I just described, Godard has the cast mostly project them like an attitude. It's part of the fourth-wall-demolishing Brechtian influence that Godard wears on his proverbial sleeve. There's value in this approach, but -- and I'm sure this says more about me as a viewer than about Godard as a filmmaker -- I found myself more engaged with the film when Godard allowed his performers to behave more like characters. Godard interviews the actors in character, almost like a proto reality show confessional, which is often quite disarming -- especially Berto, whose character(?) can't stop self-consciously touching her hair and face as she talks. One striking scene unfolds after Léaud's character says he can only do one thing at a time: Wiazemsky puts on a somber, romantic record as she tells him that she is no longer in love with him. Then, she points out that he is able to engage with the music and the speech at the same time, which leaves him quietly flabbergasted.

With La Chinoise, Godard is more interested in connecting with ideas than with people. "We should replace vague ideas with clear images," announces a work of living room graffiti early in the film. There's nothing invalid about this goal, but Godard's end product is too scattered to leave the impression that he has given the ideas in question more than the lip service he gives his characters. Eh, but maybe none of that matters, as Godard's style is still seductive enough that his fans will find moments to treasure whether or not they prize the whole. 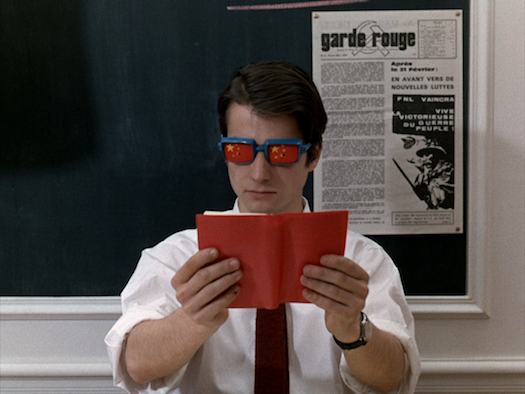 The Blu-ray
La Chinoise is accompanied by a color booklet featuring new essays by Richard Hell and Amy Taubin.

The Video:
Godard and cinematographer Raoul Coutard's primary-color-heavy palette pops off the screen in this AVC-encoded 1080p 1.33:1 transfer. Color is saturated, but not overdone -- even with those pervasive reds. Skin-tones look balanced and accurate. Sourced from a new restoration, the image is crisp and clean. No noticeable film damage. Film grain is well-resolved, with a high bit-rate that eliminates compression problems.

The Audio:
The French DTS-HD MA 2.0 mono audio (with optional English subtitles) is cleanly reproduced. The source recording however tends to sound thin and boxy. As nonchalantly stylized as Godard's images are, the audio seems relatively unadorned. Like a field recording, but one full of Godard's typical interpolations and manipulations.

Special Features:
None of the bonuses from the 2008 DVD release of La Chinoise have made the jump, but these new supplements are all quite worthy. The commentary is in English; the interviews are in French with optional English subtitles.

Final Thoughts:
To me, Jean-Luc Godard is intensely fascinating as a filmmaker, in all of his idiosyncratic phases. If you feel a similar magnetic pull toward his work, then La Chinoise will challenge and reward you. If you have heard about Godard, but have never checked out his work, this one is too tough on its audience to be a proper starting point. The barrage of pop-art-derived images and political-philosophical quotations, both onscreen and in dialogue, might make you shut down and give up within minutes. Not that that's the wrong response. I certainly don't love La Chinoise but it's well-made and makes for an interesting puzzle-piece in the greater work that is Godard's filmography. Viewed through that lens, it easily comes Recommended. 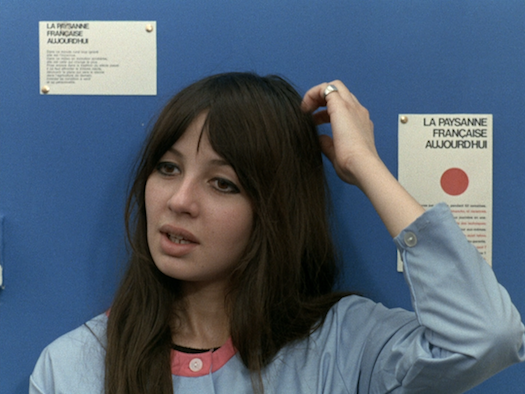