"Here, in Dofa, people throwing bombs. Seems normal to me. It's the only way they can express their revolt against the harsh methods used by the governments. As far as I am concerned, I'll always be with the bombs."* 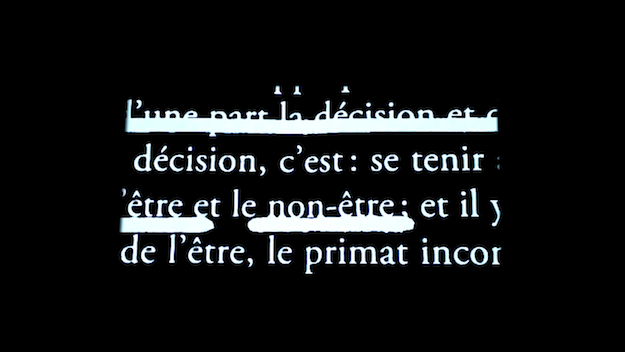 Jean-Luc Godard is one of my favorite filmmakers, so please take this next statement to heart. I think his latest film, The Image Book (Le livre d'image), is great, but I highly doubt you will agree. I write this hoping you, Intelligent Engaged Reader, will prove me wrong, but histoire... er, I mean, history is kind of on my side on this one. Most filmgoers have never heard of Jean-Luc Godard, and most self-proclaimed film buffs probably have not bothered to watch anything he's made since May of 1968.

There's a simple reason for this: watching Godard is hard. While JLG has had a prankish and experimental streak dating back at least to his first feature, 1960's Breathless, the past fifty years have seen him divorce his work from commercial narrative filmmaking and pursue a truly unique and idiosyncratic approach that pretty much only resembles himself at this point.

Disruptive visual and sound editing that would horrify your film school teacher. Intrusive, repetitive title cards which can be as strident as protest placards or as silly and punning as Mad magazine. And texts. So many texts. Literary texts. Theoretical texts. Political texts. Art texts. Cinematic texts.

Godard's approach can be so overwhelming that the first instinct might be to decode it all. Like: "if I can understand what all these pieces mean, then maybe I can get a clearer picture of what this puzzle is supposed to be." But, in his prankishness, Godard scrambles and chops and degrades his clues, in what seems like an active attempt to scare aware literalists. Being lost is part of it, one supposes. After all, his past few films have arrived in U.S. art houses with only partial English subtitles. If you don't know French (and I'm grateful that I know a little), you will find yourself spending stretches of The Image Book (and Film Socialisme and Goodbye to Language...) listening to lots of spoken French -- sometimes multiple overlapping, competing layers of it -- hoping you're not missing something pertinent. (Eh, maybe you are, maybe you aren't.)

Like most recent Godard, The Image Book is essentially an essay, and it's also a discursive diatribe about whatever the nearly-90-year-old filmmaker has had on his mind in the past year or so. It's hard to put a finger on what makes it better than his past few efforts -- and I am of the opinion that it is better -- but it might be as simple as the fact that I recognized more of the film clips that Godard decided to use in his off-kilter montage this time. It could also be that he thankfully has avoided staging any scenes with actors in this film. Godard's love of Brechtian alienation veers too often into self-parody when he has well-meaning actors rattle off obscure literary passages in contrived tableaux -- and it's a tactic he has relied on a lot in his later work. In The Image Book, his original material is confined to intensely whispered voice-overs -- mostly delivered by the croaky-voiced auteur himself -- and low-key documentary footage of the Middle East and northern Africa. 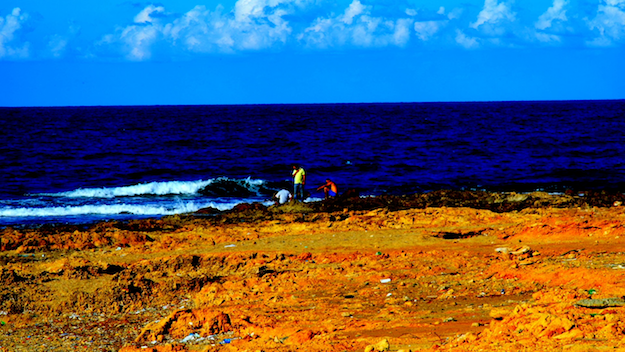 This footage doesn't appear until the film's second half, which is almost entirely concerned with cinema's depiction of what Godard calls "the Arab world." As someone who will "always be with the bombs," it comes as no surprise that he sympathizes with the Palestinian people and criticizes the images used to portray them in the media. (This long-held stance has caused some to label Godard anti-Semitic, but it seems more probable that he is just anti-Israel in the same way that he is generally anti-imperialist.) The newly-shot images he chooses to depict the Arab world (not just Palestine) have a detached, ethnographic flavor, augmented by hyper-saturated colors that render landscapes as surreal, bleeding impressions. Godard long ago embraced video as a creative medium, largely because of what happens when he pushes it to its technical limits like this.

The first half of the film is more free-floating topic-wise, but it shares this visual tendency to warp images through the use of video "flaws." Godard pulls clips from countless eras and countless national cinemas -- Emil Jannings as a contented doorman in The Last Laugh, Sterling Hayden asking Joan Crawford to lie and say that sure, she missed him in Johnny Guitar -- and sometimes he interpolates clips from his own work to show how these movies rubbed off (e.g., Michel Subor imploring Anna Karina to lie to him about how she feels in Le Petit Soldat). But Godard rarely excerpts these clips looking their "best." Rather than pristine 4K or HD, Godard will present clips that appear blocky, smeary, and/or blown-out, as though grabbed from Youtube or captured by an iPhone pointed at a TV. He will present clips in the wrong aspect ratio, with faces stretched wide or alternatively smushed thin. 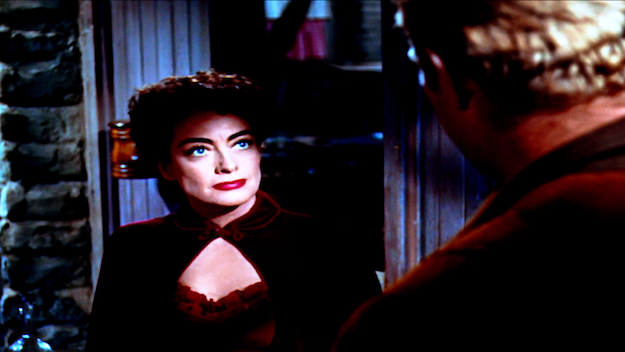 At least a dozen times, he has the video shift its aspect ratio mid-clip, sometimes from incorrect scale to the correct one, but often the reverse. The cinema purist in me wants to think Godard is doing this to bemoan the degraded way in which so many viewers experience classic cinema -- lo-res, on a miniscule screen, badly framed, etc. -- but the longtime Godard-watcher in me suspects that he embraces these "wrong" ways of viewing. Certainly, by imposing these kinds of manipulations and mutations on the footage, Godard can be seen as authoring something new rather than just trotting out a sampler of canonical hits (his own films included).

Godard's visual experiments might strike the viewer as arbitrary or ingenious. A moment where he uses the jutter caused by pausing a frame of analog video as a method of animating a still image -- whipping a shot of a soldier with a machine gun back and forth across the screen, so that it looks like the rat-a-tat of the weapon's backfire is causing it -- feels very much like the latter.

This image is satisfying, but it's a lie. Though Godard will probably be forever associated with writing the line of dialogue, "Photography is truth, and cinema is truth 24 times a second," it's never been a sentiment that reflects his interests as a filmmaker. If The Image Book has a unifying thread, it is the way that images can be used to impart lies as easily as they impart truth, and how they can serve justice and as easily as they can serve injustice. This point is hard to miss when Godard juxtaposes clips from glorious Hollywood war epics with cold, brutal clips from newsreels and modern-day Al Jazeera reports, but it's even there in goofy moments like his decision to cross-cut pornographic footage of anilingus with one of the pinheads from Tod Browning's Freaks laughing and clapping, as though in response.

Part reverie, part elegy, and part free-form ramble, The Image Book is pretty much just Godard doing what he does naturally these days. It's atypical, it's challenging, but it's arguably rewarding and worth the effort. I've rewatched numerous passages from this film and have found that it coheres and resonates in unexpected and satisfying ways. It might be the rare film that demands re-watching before any judgment can be rendered. I just desperately hope that the right kind of viewers will give the film that chance.

*This transcription is taken from the film's English subtitles, translating a Godard voice-over. As suggested in the review above, those subtitles skip over some passages of his monologue, but, even in this version, the sentiment is clear. 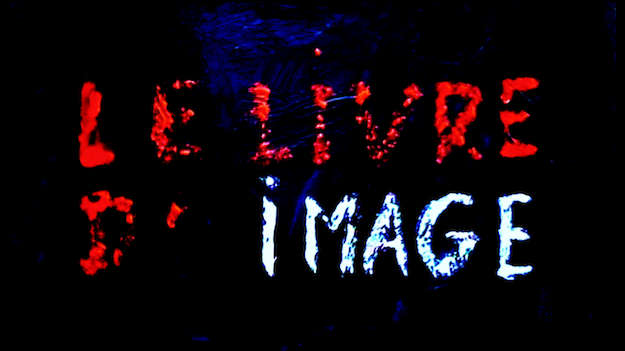 The Blu-ray
The Image Book comes packaged with a color booklet, featuring stills and an essay by TIFF programmer James Quandt.

The Video:
If you read the movie review part up above, you can suspect that judging The Image Book's video quality in terms of what viewers normally expect from a movie is kind of impossible. From what I can tell, Kino's AVC-encoded 1080p 1.78:1 presentation is quite accurate in translating Godard's intentions. But that means blurriness, blockiness, weird framing, intentional anamorphic squeeze errors, oversaturated and unnatural colors, and sometimes moments of stark clarity and crispness. I'm going to give this a high rating in the little stars column on the side, since it does what it sets out to do, but don't expect this to look like a typical movie.

The Audio:
With Goodbye to Language, Godard exploited 3D cinematography, but did so in a way that upended the format in unsettling (and potentially headache-inducing) ways. Similarly, for this film, Godard has chosen to create a DTS-HD MA 7.1 (!!) surround audio mix (mostly in French, with some optional English subtitles; a less aggressive DTS-HD MA 2.0 stereo mix is also offered), and it is as challenging and unsettling as the 3D stuff. Far from being immersive, and not exactly gimmicky, Godard's mix is confrontational. Moments of quiet are drowned out with bombast and distortion. Different voices and sounds overlap and appear in different locations. Again, it's not an end product most viewers would expect a filmmaker to use this kind of technology to create, but I will rank it highly for the way it achieves what it clearly set out to do.

(HD, 1:38:32) - Longer than The Image Book itself, film scholar Brenez discusses her working relationship with Godard in the making of this film, shedding some light on his attitudes and process.

Final Thoughts:
An essay on truth and lies, past and present, war and justice, art and cinema. Godard aficionados will find The Image Book a welcome cousin to JLG's self-reflexive Histoire(s) du cinéma series, while the uninitiated might find the whole enterprise utterly baffling. If you know exactly what you're getting into, or if you're just generally feeling bold and brainy, then this release comes Highly Recommended. 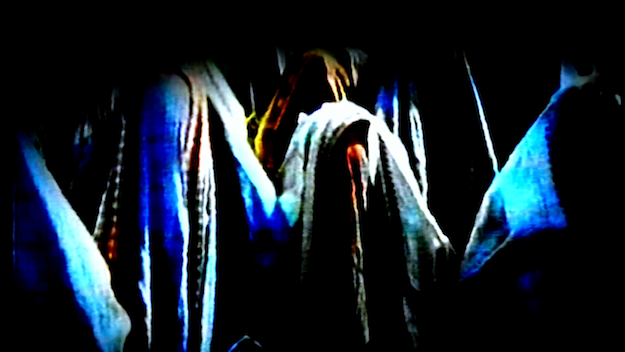