This second DVD release from Shout Factory Kids celebrating Sesame Street's 50th anniversary consists of a special made this year for prime time on both HBO (where the show has moved for its first run episodes) and PBS (which still presents the show delayed after the HBO showings, and with an annoying "E/I" symbol at the top of the screen to count towards the FCC's required hours of "educational programming" each week- in that regard it's likely for the better that its new primary home is HBO.) Like the 25th anniversary special, which was one of the very first DVD releases back in 1997, this focuses mostly on songs from the show but most of them are new performances, done on the show's set, rather than archival clips. There's a number of celebrity appearances but for some reason Joseph Gordon-Levitt, born after I had already outgrown the show on TV, was chosen to be the main "star". He takes a cab to visit the street as its Muppet and human cast are throwing a party. 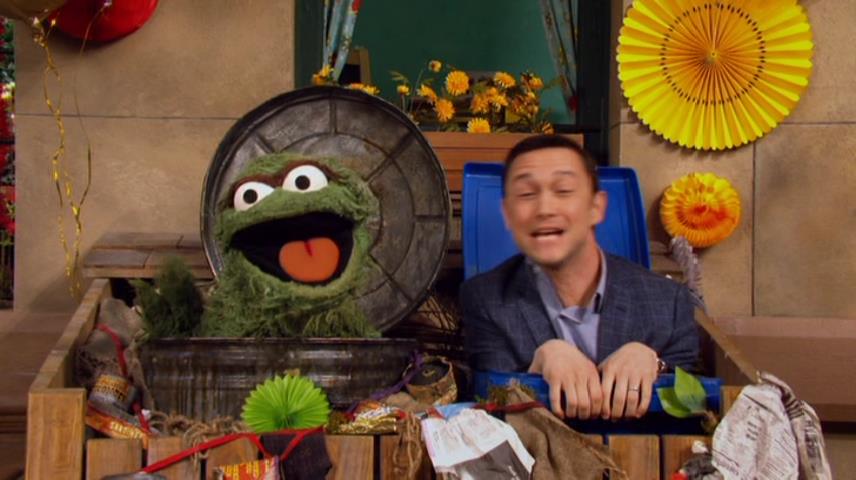 A rather silly "plot" has been thrown in where Joe (as he's called by everyone here) really wants to get a picture of himself and the cast under the Sesame Street sign, but when his back is turned the sign suddenly disappears amid a blast of modest special effects. Grover, Cookie Monster and Elmo set out to find it and put it back up before Joe finds out it was ever gone. Between all of this, plenty of favorite songs from the show's past are performed with guests- the highlight being Elvis Costello singing "Bein' Green" with Kermit the Frog (voiced here decently by Matt Vogel, who has taken over a number of roles including Big Bird whose voice is simply too low compared to Caroll Spinney's original.) Nile Rodgers does an upbeat rendition of "People in Your Neighborhood" with Ernie (Peter Linz) and Grover (Eric Jacobson). Gordon-Levitt hams it up most of the time, claiming that he's always been part of the show (where a montage of older clips runs with him inserted into them) and does a fast-paced medley of more classic songs from the show.

Sesame Street was an important part of my first few years, being one of the only things on TV that I was even allowed to watch and I never wanted to miss a single one. I also had many of the record albums put out (there were no DVDs or even VHS tapes back then)- but after outgrowing the show I haven't kept up with many of its changes. I'm aware of Elmo only because he's apparently very popular with later generations, but I've been mainly confused by the changes in the human cast since in the few instances when I see them, I have no idea who they are or how they got there. The only recognizable faces seen here are Bob McGrath (who looks VERY old here), Gordon (Roscoe Orman), Luis (Emilio Delgado), Maria (Sonia Manzano) and Linda Bove. A few Muppet performers as themselves can also be spotted in the background, including the late Caroll Spinney who passed a week before this review was written, sitting in front of someone else in the Big Bird outfit. While it's sad to lose many of those who made the show great, at least others are trying to follow in their footsteps. With the exception of Big Bird, most of the newer voices for the older Muppet characters still work.

The second half of the 80-minute program has a number of other celebrities, including Kate McKinnon and Blake Lively (also born long after I'd outgrown Sesame Street) being asked by Muppet characters what their favorite past moments from the show were, after which those segments are presented unfortunately in the same mangled frame rate that plagued the "50 Years and Counting" DVD. More technical comments follow: 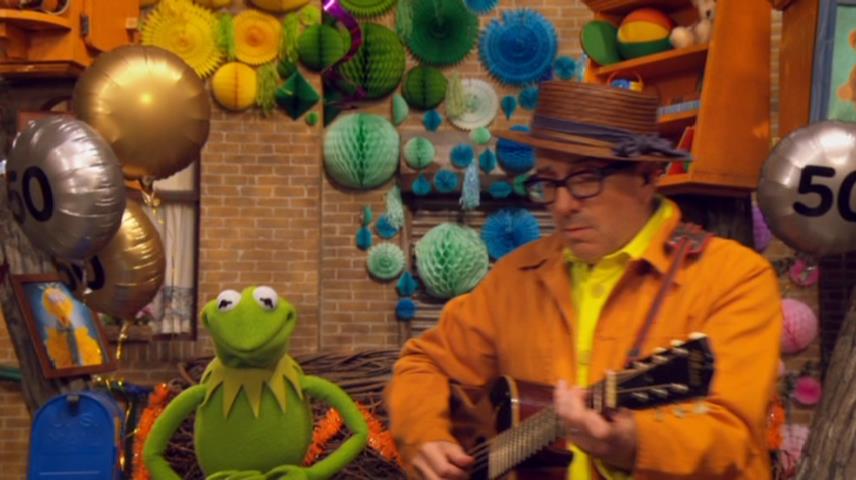 One thing I learned from Sesame Street that they likely didn't intend for me to was the differences between film and video. The older shows used a mixture of both and the difference has always been night and day to me even before I knew exactly why- I'm still baffled at those who swear they don't know one from the other. The digital age has made this a bit more complicated and not always for the better. Flipping by more recent Sesame Street episodes on TV, behind the cluttered picture I've noticed that since going hi-def the show has also been shot intentionally in a lower frame rate- 24 frames per second, matching that of film. I've never been a fan of this look, as the overall quality is still that of video rather than film, but with a lower frame rate that takes away the "live" look that conventional video has always had (prior to hi-def, a few concert videos and TV shows shot on videotape were processed in "FilmLook" where the frame rate was converted- and I've always thought they looked terrible.) So while I've called out the "50 Years and Counting" set and the older clips included here, the newer footage looks as it's supposed to for better or worse. Unfortunately it's also been down-rezzed to standard-def DVD from hi-def, there is no Blu-Ray release available. The disc is at least given a high bitrate free from obvious compression artifacts, but the format's limitations are still clear. I was able to sample a bit of the show from HBO's streaming service using a borrowed password, and I was amazed at how much better it looked there. While I always prefer physical media over streaming for a number of reasons, it's pretty sad when the disc is obviously inferior. With the older clips included here, the frame rate on these is botched with basically one field being thrown out. This may have been an "artistic decision" to match the newer hi-def footage, but it just doesn't look good.

The sound quality is decent enough, in 2-channel Dolby Digital with some directional effects. However, I found sampling the HBO stream that the audio there is in 5.1- why was this not included on the DVD? That might have made the lackluster picture quality a little easier to swallow. English hearing-impaired subtitles are included along with Spanish subs and old-fashioned closed captions. 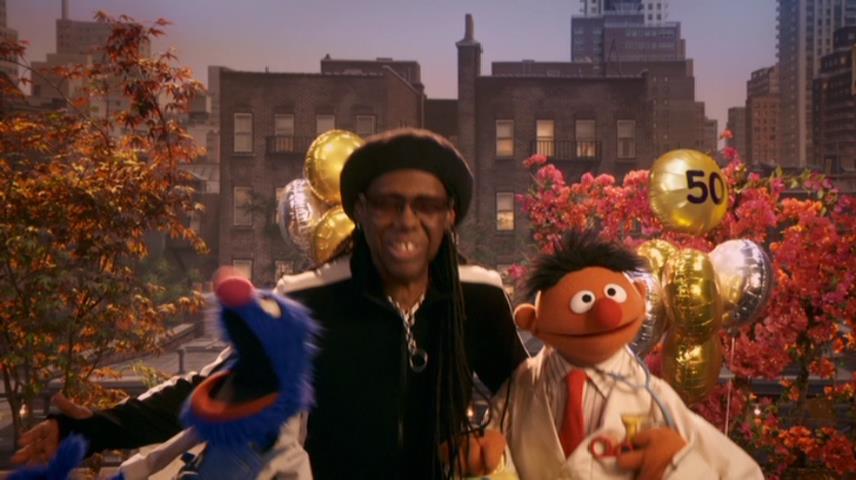 Note that the back cover notes "Feature and Bonus Run Time: 122 Mins." but the total time is far less than that, closer to 90 minutes. A 5-minute "Elmo's World" segment is included as an extra where the topic of discussion is celebrations, and "50 Years in 50 Seconds" quickly mashes together moments from the show that you'll need to pause and frame-advance through to see all of. The disc opens with a trailer for the "50 Years and Counting" DVD with its botched frame rate on full display, and following the special trailers for the Sesame Street Dance Party!, Awesome Alphabet Collection and Celebrate Family DVDs play automatically before returning to the main menu- they can also be selected from there if you like. 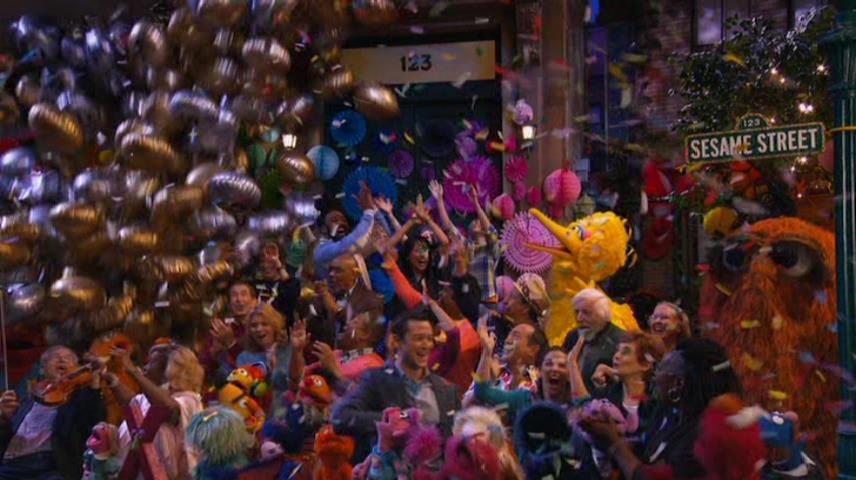 At the risk of repeating myself, I really have to question the logic of releasing new material on standard DVD at this point. Blu-Ray has been around for more than 13 years now and players can be bought for next to nothing, and you cannot even find a non hi-def display from recent years. Blu-Ray discs still provide the best possible picture quality, but without that option here it still looks better via streaming if you're able to see it that way. With the availability of streaming material is always uncertain, this will still be the only true permanent record of this special. This is worth seeing mostly for what might be the last appearances of the older cast members, and to commemorate the show's milestone anniversary- despite its faults it's still a must-have for Sesame Street completists. We'll have to see how the 100th anniversary goes in another 50 years.