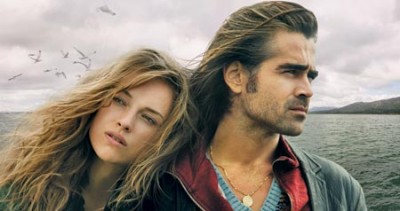 Reviewed at the 2010 Tribeca Film Festival

The fisherman pulls her out of the water, in his nets. She's unconscious, but somehow, inexplicably, she's alive; she wakes up and, after the initial shock, she takes a liking to the fisherman, who lets her stay with him. But it's not until later, when he is keeping his daughter company during her dialysis by telling her the story of his day ("Why's it always have to start with 'once upon a time'?" she demands) that we realize what writer/director Neil Jordan is up to: he's gone back to Ireland and made himself a fairy tale.

The result is Ondine, a lush, sweetly intimate picture that works both as an adult romance and a fantasy. It also marks an unexpected turn for the consistently unpredictable Jordan, who is following up a scattershot biographical comedy and a slick studio thriller with a project that bears little resemblance to anything in his filmography--save for his second picture, the oddball "Little Red Riding Hood" riff Company of Wolves.

The fairy tale overtones are made more explicit the further the story goes, as we discover that the girl, Ondine (Alicja Bachleda) is a first-class beauty with a voice like a Disney heroine. When she sings, in a strange dialect, suddenly there are fish to be caught. Is she some kind of a sea creature? The fisherman, Syracuse (Colin Farrell), isn't sure, but his daughter Annie (Alison Barry) becomes convinced that Ondine is a "selike", a mermaid-like creature found in Irish and Scottish mythology. Perhaps Syracuse doesn't want to know; a kind, gentle soul, he's a recovering alcoholic (most folks still call him by his drunken nickname, "Circus," which he was given for the trouble he'd cause when inebriated) who is clearly deeply smitten by this mysterious woman. When she asks how long she can say, he replies wistfully, "If it depends on me, you can stay forever."

Of course, these things never do last forever. There's a malevolent danger approaching, someone or something that is looking for Ondine, providing a Big Bad Wolf-style threat to the makeshift family's "happy ever after." What to do? "Nothing makes sense," Syracuse says. "That's why I'm afraid." But evil must be faced, and hopefully conquered; by the time the unexpectedly intense climax approaches, we've grown attached to the trio, to the love and tenderness between Syracuse and Ondine, to the sweet relationship between the father and daughter, to the burgeoning affection between Annie and her selkie.

Ondine is an absolute charmer, gorgeously photographed by the great Christopher Doyle (Hero, Chunking Express), who shoots the Cork, Ireland locations as a world of greens and blues, of lush, rolling hills, but one that is perpetually overcast--an effective metaphor for the reality around the edges of the fanciful tale. Jordan's direction is relaxed and enjoyable; his camera is active and involved without being obnoxious about it, and he coaxes natural performances out of newcomers Bachleda and Barry, as well as veterans Farrell (continuing a streak of good work) and his good-luck charm, Stephen Rea, who appears as the village priest. His scenes with Farrell are the picture's comic highlights, as Syracuse goes to confession because "there's no AA chapter in this poxy town"; when he informs the priest, from inside the confessional, that his announcement of time sober is supposed to get applause, the priest replies, "Where'd you see that, in a movie?" The supporting roles are filled with naturalistic actors who lend an authenticity to the film--in fact, if there's a complaint to be heard, it's that the accents are so thick that, at a couple of important moments, this viewer had to piece a plot turn together from context clues rather than explicit dialogue.

Jordan makes a brave, risky choice in Ondine: to make a film that has infinite potential for absolute silliness, and to then play it straight and make it work. The result is warm, lovely, and lyrical. It's a perfectly beguiling little movie.